So, I´ve downloaded bubble on my MacBook Pro. It was a breeze to get it going and I have now been sitting for hours at end to evaluate sound quality differences between Ndx Tidal and Tidal through bubble, controlling it with Kazoo (which is fine). I find the sq is quite different between the two. However it is not that easy for me to decide which is best. Seems like it´s brighter and perhaps more detailed with a very different bass when played through bubble. Also maybe more open campared to ndx Tidal which is more rythmic and maybe more midbass centric.

It feels as if the sound is fuller without bubble, with more attack or leading edge.
In Kazoo it claims it´s FLAC 0 KHz/0 bit 1,4Mbps
What is your thoughts on this? Could it be, I´ve done something wrong so that bubble isn´t sending a proper stream?

Bubble can sometimes give duff info as this passing through data it’s only metadata and won’t effect the sq. I would set bubble to transcode to Wav to your nds if you have not already done this as Naim kit seems to perform better according to Naim and a big majority on here.

Changed to always send pcm. Now kazoo is displaying 44/16. Thanks.

Still not convinced. Bubble is better in some ways and not in some. Some music seem to benefit from bubble and some doesn’t. Not exactly sure how and why. It just feels right some of the songs and wrong for some. With bubble musicality sometimes gets lost and with Naimapp sometimes the music gets too ”fat”. It also feel like the music is faster with Naims integrated Tidal. For what it’s worth.

You might want to try running Bubble UPnP on a different platform … I ran it on a RPi V2 and it was consistently better on my legacy streamer than playing tidal natively.
Underneath the covers when set up running optimally and transcoding you see the BubbleUPnP reverse proxy when playing Tidal looks the same as local playback.

I don’t really have any other platforms. Also I don’t really understand what reverse proxy is. In the Naimapp you can see that it’s playing a upnp source and which tune is playing but you can’t change song. However you can scrub within a song which you can’t in kazoo. On the display of the NDX you also see it’s upnp and some metadata showing which song but no time ticking for instance and no info on type of file playing. The music sometimes suddenly stops playing which never happens with playing through the Naimapp tidal integration.

A reverse proxy is a special server that allows multiple local hosts to talk to a dedicated remote host, like Tidal, by breaking the protocol flow between your host and the internet by isolating the data flows and TCP dynamics between your local network and the internet.
The key thing here is that it makes the cloud service look like your local media server as far as your streamer is concerned.
If the music suddenly stops… something doesn’t sound right. When I ran an NDX, BubbleUPnP worked flawlessly… however Bubble pushes to the streamer, whereas when the streamer works with UPnP it fetches… so there might be some display differences.

I use Bubble App and that integrates perfectly with Bubble server. On the server settings use the transcode option set to AUTO as recommended, do not set the output to LPCM as it sounds dreadful.
You should then see WAV 16bit 44kHz when streaming from Tidal and the SQ is much better. 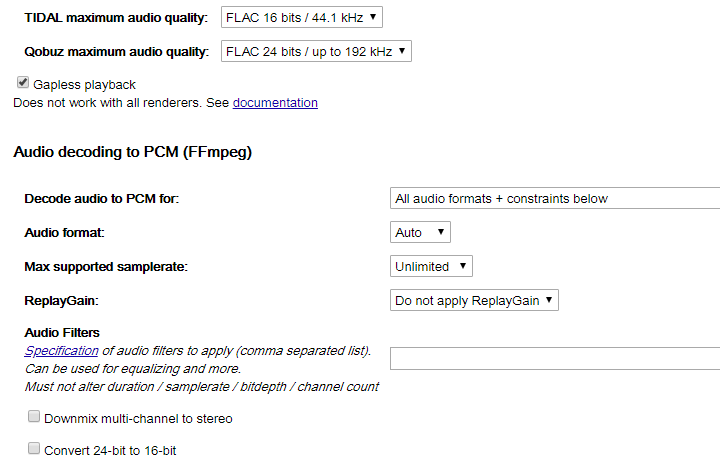 Hello Simon
Is rip v2 an app on a laptop?

I think Simon means Raspberry Pi. This is what I also use.

Yes RIP is a routing protocol and something quite different. I was referring to a Raspberry Pi as @Guinnless states . which is a tiny cheap USB powered Linux computer

Yes that’s exactly the settings I am using. Except gapless. Thank you. I don’t have an android device so I can’t use bubble on my phone/tablet unfortunately.

Thank you Simon! I’ll look in to the world of Rasberry Pi. And thank you for explaining the technology involved here.

It´s also working better now regarding the stops, as in no stops. Perhaps it was because I was shifting between integrated Tidal and bubble Tidal comparing the differences. I also want to say that the differences in sound is consistent albeit my preferences varies with genre and/or song.

I was also unconvinced that Tidal via Bubble was a clear improvement on native Tidal into my N272. Possible caveat here is that I find Bubble server / app quite fiddly to set up and I may not have optimised all the settings (WAV transcoding was set).

Since OP owns a Mac, I’d suggest giving Audirvana a demo (free 30-day trial available). Audirvana sounds better than Bubble to my ears, and setup is a breeze.

Bubble config is simple really. I confirmed with my missus and we both agreed that the Bubble proxy was better then Tidal via the Naim app. Transcoding was set, it just sounded a little more refined.
And of course I can use Qobuz studio

QNAP/Bubble/Kazoo/Tidal through UPNP on my SU is night/day better than Native Tidal on my SU.

@ElMarko - can you remind me how to set this up? I have a QNAP NAS and want to try this out again. Thanks.

Is there perhaps consensus on which software sounds most satisfying between Naims own app, bubble upnp or audirvana upnp?

I suppose it’s system dependent and even genre dependent but am curious to now what you guys prefer?

I think I prefer Audirvana running on my MacBook Pro.

There’s a thread here that discussed the setup that I used. You need to dl the minimserver app to your QNAP. Install minimwatch on your computer ( for me it’s a mac) and set the stream transcode configuration to “flac:L16”. There might be some other details. I’m heading in to the office and will try to find it later.

Edit- this is the thread I think. It’s kinda disjointed but should get you there.

In case anyone is interested, RP have now produced a conventional FLAC stream, with a URL that can be added to some services. Unfortunately, this does not include Naim streamers, as the vTuner service they use doesn’t support FLAC. It can be used in Roon, though, and that took me all of about 30 seconds to get up and running. If anybody wants to try it, the URL is: http://icy-8.radioparadise.com/flac I noticed, too, that RP have changed from FLAC to ALAC on iOS devices, apparently due to probl…