I had a cable going through brick wall, which I removed a few weeks ago and plastered off on the inside but not the outside.

I now have some (white tailed?) bumblebees going in and out on the outside.

Am I right in thinking these are OK, won’t do any damage and can just be left alone until the queen goes or do I need to block off now?

Don’t really want to block it off while they’re doing their own thing, I did mask it temporarily to see how many angry bees turned up, figured it was about 12/15, before unblocking it again.

They should be ok and disappear later in the year sometime from August onwards. Sometimes they leave before that. We had had several instances of the same and provided you don’t annoy them or get in the direct flightpath they do no harm. We had some in the garden that got annoyed when i mowed the lawn too close to them and it was a bit disconcerting when a boiling mass of bees came out of the little hole but they didn’t actually do anything. Other times they have been high in the wall so were well out of the way. I just filled the hole when they had gone despite the fact they rarely use old nests.

If they are around kids or animals it might be another matter , but I found they didn’t bother me if I didn’t bother them and they are fascinating to watch.

harmless, and good to have around.

I had white tailed b.bees nesting in a roof joint about 3 years ago They were harmless as they were high up & not close to people movement & also not in huge numbers like honey bees or wasps.
After they died off I had the roof edging repointed & they’ve not come back. 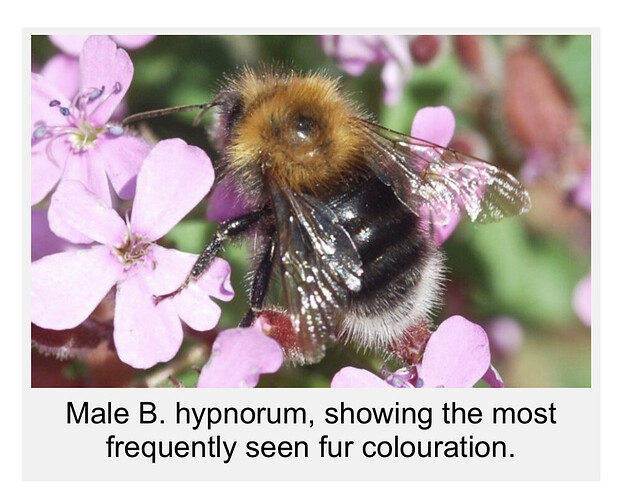 They are wonderful creatures and you can find out more here. There is a link to the tree bee. The good news is that after they leave the nest the new queens hibernate elsewhere. 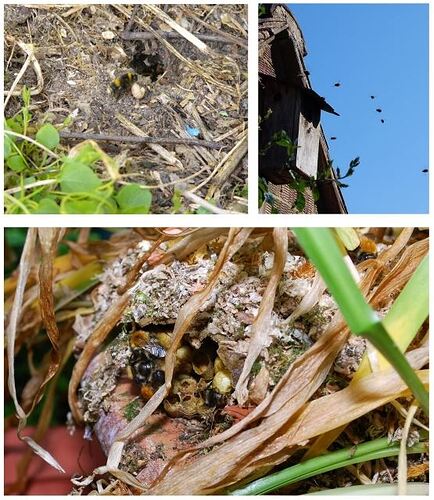 A list of frequently asked questions to help answer our most common bumblebee nest enquiries.

My favourite piece of info about them is that the Queens find a whole to live in over winter. They choose a North facing bank so that they don’t get woken up too early by the warmth of the low winter sun.

I can confirm mine were the (new to UK) ‘tree bumblebee’ rather than the common & long established ‘white tailed’
Identified with a single prominent white tip on the more or less all black coloured abdomen, compared to the black abdomen with an orange band & white tip of the white tailed bee.

We have had a little nest of ground bees by the front door for a few years. It’s dry and sunny there and we put down a paving slab that helps them. One or two occasionally get indoors by mistake and we just help them out again. Bees are really declining and we need to give them all the help we can. They are such delightful little creatures.

Cheers all, will leave them be.

I have thoughts of a Pythonesque identification sequence, perhaps comparing African and European variants. Only I haven’t got any coconuts to hand.

If they nest their successfully, after you patch up your wall it might be nice to put one of those bee nesting boxes up?

Funnily enough, when it’s dry again, I will be constructing a bird feeder slash bee home out of some lopped tree branches.

The wood’s been sitting in my garage since May bank holiday, waiting for either the rain to stop for more than a couple of hours or Noah to show up in his boat. Whichever comes first.

We’ve got a bumble bee nest in the top part of our rabbit hutch. It’s a bit of a nuisance with several of them queueing up to go into the hutch and not knowing exactly how they’ll react to you cleaning the hutch every day. However, I won’t disturb them at all and I’ll work around them. Love bumble bees.

Our roofer was saying he was doing a roof of a multi-hundred year old property… this was last year.

He’s on the roof doing the work when he notices a lot of bees going in and out of the roof. Anyway he takes some tiles off and there is a HUGE nest in there. I mean BIG! They got a bee expert in and he says the nest was decades old. It was really big. The problem was the hive had rotted all of the roof joists. I’m not sure what they did but they cleared the hive out (I’m not sure if they tried to relocate it or what ever) and then had to replace the complete roof! I’ll see if I can get some piccies off him.

From the looking around I’ve done, this does seem like an issue with certain Bee types e.g. Honey Bees.

Don’t know where it came from but I ‘liberated’ a hornet this morning !