I’ve clearly been misguided, but I’m sure I was once told that the band on the Naim cables always goes at source end, i.e. the end where information is traveling out from.

However the Burndy cable as shown below has the band at the NDX2 end, which in the case of power flow is not the source as the XPS is the source in this case. So is there a rule, or is there no rule and you just blindly follow the documentation? 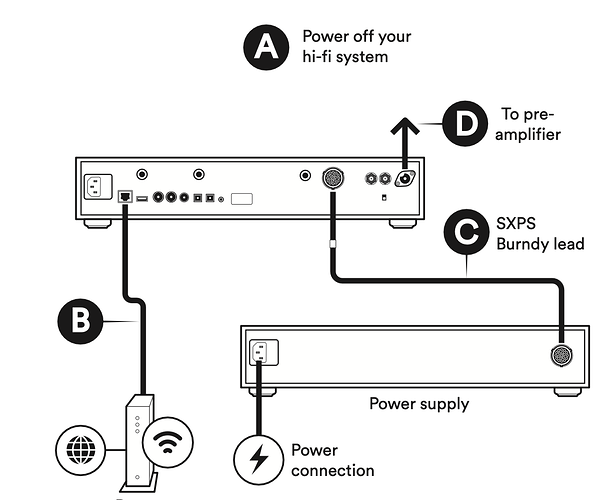 It’s the musical source, which is the NDX2. The diagram is correct.

Many thanks for clearing that up.

All sources are not created equal!

Exactly. That’s why your Snaic has its band at the 82 end. If you were using a 252 and Supercap, the Burndy band would be at 252 end. In these cases the music goes from pre to power supply, to the pre is the musical source. The power source is the Supercap.

In the case of your streamer, no signal passes along the Burndy of course; the XPS is the power source and the streamer is where the music comes from, in this case going to your 82, so it’s still the musical source.

When you have a 300 or 500, no music goes along the Burndy but the band goes at the head unit, which is the music source - the music going from the head unit to the speakers. So it’s actually entirely consistent throughout the whole range.

Explaining further may have made it more complex!

All of this pre-supposes, of course, that you buy into cable directionality (?)

Well I did get it wrong first time, and it played the same as when I corrected it