I have a selection of 2M powerline lites and I’m wondering if there would be any negative affect associated with shortening them so there isn’t a snakes wedding under my hifi rack. They are excessively long and I don’t think they need to be. Can’t think it would change the sound but can anyone provide some expert input here? Thanks chaps.

Lewis, do not shorten them 2m is the optimum length as tested by Naim.

No reason at all not do it, electrically. I was tempted but to preserve a possible resale or recycle opportunity, I have mine folded to reduce length by apr 0.75m in Velcro tape. That said mine live in a closed cabinet powering non-Naim stuff & don’t hang loose down the back of the rack

I’ve got one on my Qb in the kitchen. I chopped off the IEC plug, reduced the length to 45cm and added a Schuko fig 8 plug. It works rather well.

No, it won’t change anything. Just think of all the different lengths of copper we all will have inside our house, let alone leading up to it. A few cm more or less of power cord won’t do anything at all.

They were optimized for 2m so you should not shorten.

But if people believe mains cables are all the same anyway then just plug-in a short standard cheap commercial cable cut to the length you require and if you hear no detriment then you have a solution and sell the other cables.

Otherwise you may shorten - they sound worse - and then you can’t undo it and may not be pleased you did it, but obviously your call. I would not cut them.

The cables have an inductance proportional to length tuned to the ‘bung’ in the equipment-end plug.
The ‘noise’ is mainly at the Naim box getting out not the other way getting in if you look at what causes the noise - rectification of mains in the box - slicing the waveform to charge the regulation caps generates lots of current spikes that then leaves the box on the lead and interacts with the other boxes. That is actually what happens and not so much mains noise from the outside world - there is some of that too but dwarfed by the rectification noise inside the box.

But try it - I suggest the cheap experiment first so you hear what it does.

My mains leads to 552 and 555ps are 1m self made jobbies using 4mm conductors unscreened and quality plugs…seems to work great… Although I was wondering if screening would be a good idea…connected at one end at the mains plug… PS audio advice…
Like you I was thinking about all the noise being generated by the rectifiers…
Are the Powerlines screened???

‘mornin Rich. I have my own screened cables, the screen is connected to the input end & left floating at the appliance end. Does it make any difference? … it’s the way I do it & I’m not bothered about checking the alternative.
Powerlines are not screened.

Hello Darkbear , Sorry to Butt in but HHalibut ESQ said you could answer my question below

Long story–can you tell me Do the NDS Burndy Pair connect with both the CD and the PSU as per factory setup.

Thank you so much and sorry for crashing this thread

I read somewhere, dont know if true though that a screen must be connected at both ends for it to work as a screen. If not connected at both ends then having a screen is then pointless and will degrade SQ too. Something to do with impedance i think but not completely certain.
I always connect at both ends as per Supra instruction and others.
I think this is down to the very rare chance of noise loop ground which ive never experienced despite the so called warnings about this.
So much doubt and wrong info reg hi-fi isnt there?

Not so, it depends on application. For RF& EM suppression it’s always recommended to connect screen to earth at closest to power source.
You do not understand what “ground loop” means, it’s has nothing whatsoever to do with power applications.
Supra Lorad has a semi conductive E wire insulation & the screen does not need to be connected at any point. So you really need to go recheck what Supra say as you have completely misunderstood.

Well there own assembler connected at both ends and their website also states it bad practise to not connect the ground wire at both ends.

On you tube look at supra lorad mk11 installation. You can clearly see the drain wire is installed at both ends of the cable, plug and iec. Are they wrong?

I apologise if this is too off centre for this Thread but this fact has bugged me having seen it used in two Shows by Naim agents and here in private home–how in all seriousness is this sonically or indeed on power distribution facts be beneficial–daisy chaining??

Please tell me it is so– 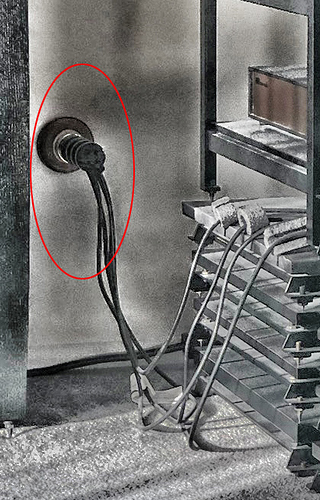 That looks like the Tap-ons used in NZ. They work very well, by all accounts. Very cost-effective too.

Yes, that’s correct. I had three piggy-backed like this before I brought a distribution board. I think they pass through, rather than daisy-chain.

Hmm The problem is unlike the US Hubbells --the Aust /NZ pins are flimsy and have little grip with one plug let alone a Piggy back scenario !

Not on my watch I’ll pass on that one.
Thank you Guys,

On you tube look at supra lorad mk11 installation. You can clearly see the drain wire is installed at both ends of the cable, plug and iec. Are they wrong?

I’ve only used the original LoRad with the semi conductive E insulation & no drain wire. But if they are connecting at both ends, I don’t agree, that is not correct in my book.
The question is what do you want the screen to do ??
Suppress interference from electric fields or magnetic fields & at what frequency.
.
The screen types found in domestic & light industrial cables is not effective with all emissions & frequencies, foil is good for electric fields, braid on its own is not very effective, braid & foil is better, after that we are into expensive & cables that are not made for domestic use.
In a domestic situation there is nothing that really needs a screen but its easy to suppress electric fields & this is what LoRad does

Foil only screens such as LoRad (with & without drain wire) is not much good for anything except as a LF capacitive screen for electric fields.
A foil screen works by capacitive coupling, it couples & commons its own emissions to the screen & outside E fields to screen & to earth ground.
As an electric field carries potential the screen is liable to have induced current; therefore its important to have the screen open at one end & earth grounded at the other & ensure that no current will flow in the screen.