Can speaker cables go inside a wall

Hi everyone have a weird question but figured if anyone would know it would be someone on here. When we moved in there was an old fashion gas fire which has been removed and the hole made bigger and an electric fire put in (an ezee glow mini zara if relevant). Because the guy doing it knew of interest in getting speakers he put in a plastic pipe at the back behind the fire that opens either side of the chimney breast.

I was talking about wanting to get better speaker cables either witch hat phantom or naim nac a5 and my mum asked if the right one could go through the tube (I haven’t dared try with my current cables). So would I be risking damaging the cable if I did that, has anyone done anything similar? I rarely actually use the fire and I don’t think it would get hot behind it as the heat when it is on seems very targeted.

Unless you know the cables won’t get hot then don’t take the risk.

I would be very surprised if this caused any problems but without knowing the design of the fire it’s hard to say for sure. Next time you use it stick a thermometer down the tube and then you’ll know for sure.

the bloke who installed it said that it was just a fan that pushes hot air out the front of the fire but yeah i’ll find a way to check if that’s the only potential issue and being in a tube in the wall won’t do it any harm.

Yes, of course you can, can you see my cables 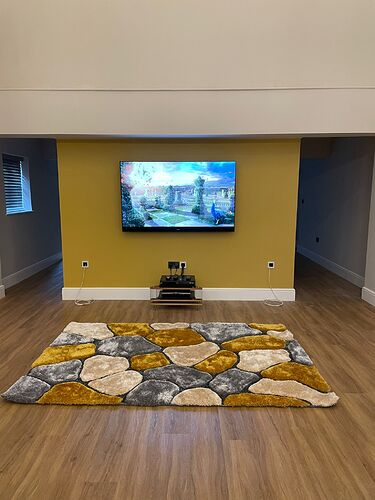 Now that’s how you do it!

That’s super neat and impressive did you do anything special in the wall? Or do you think mine will be fine in just the plastic pipe/tube?

Speaker cables can certainly go inside a wall. The significant question here is whether they can be routed close to a source of heat, simply depends on the degree of heat and type of cable insulation. If insulation characteristics not known, then assume insulation is PVC without modified softening point, so only OK if temperature <70C. If PTFE then maybe up to about 270C would be OK.

In routing cables from a point not central between the speakers it should be borne in mind that it is usually best to ensure cables are the same length for both channels,

Yours will be fine, mine’s a false wall to hide the cabling etc. There’s 30m of Kudos speaker cables, HDMI’s and fibre optics for the AV cable behind that wall

So apparently this fire is front heated and you can mount a tv above or below it according to the website so that seems reassuring also the power lead for the fire itself is back there so if there was an issue it would damage its own power lead wouldn’t it? So I think its ok.

It means at least one of my cables is away from my 7 month old puppy lol. We are doing our best to teach him to stay away from electronics and cables (luckily no accidents in this area so far but we have had an incident with a rug and the front door curtains though) but he and his constantly floating about fur is the main reason I’ll always stick to bookshelf speakers on stands rather than towers

Edit would be getting 2x 3.5m witch hat or nac a5 cables to match naims recommended spec.

I have done the same thing running speaker cables behind a gas fire with no problems. Admittedly the fire is very rarely on, just the pilot light. The cables just run along the floor behind the back of the fire and I have had no problems. About 2 years ago I replaced the older speaker cables (Cardas Crosslink) with new NACA5 when I bought my Naim gear and I saw no issues on the old cable at all.

That is great to know, yeah i’ve only properly used mine once since it was bought this is actually the warmest room anyway so its just for if there is an issue with the heating really.

the power lead for the fire itself is back there so if there was an issue it would damage its own power lead wouldn’t it?

Cables on heating appliances often use heat proof materials which your speaker cables won’t have. The manufacturer can probably advise.

You will be fine, it wont get warm down there, well certainly not enough to damage the wires.
I am a heating engineer by the way

If this installation is permanent then there may be a requirement to use Low Smoke Zero Halogen cables. Other enthusiasts who’ve ‘hidden’ cables in walls also need to pay attention to this. Some details here:

What Is Low Smoke Zero Halogen And Where Should It Be Used?

Low smoke zero halogen (hereafter referred to as LSZH but also called LSOH, LS0H, LSFH or OHLS) is a material classification that is common to cable and wire casings.

The question is likely to be regulation specific but, AFAIK, speaker cables are not mentioned in most building regs. Generally, the regulations focus on in-wall speakers and whether they require a rear fire hood/plate.

As for replacing, ensure that the cables are piped through trunking tubes and you’ll always be able to pull through a new cable when the desire strikes.

Some cable manufacturers even specify which cables are recommended for in-wall. But again, this is generally not based on regulations but on whether that cable comes in a drum long enough to be worth while.

I had in-wall cables in a 30th floor new build apartment a while back. The fire and safety regs were very extreme. We couldn’t even buy curtains we wanted. All residents had to do fittings that met building regs (Japan in my case). But when it came to in wall cables, the construction company basically said “we’ll put in the trunking and you can shove through whatever, power, video, speaker cables you like. Just tell us where you want the entry and exit holes and the diameter and the rest is up to you.”

Thanks its good to have an expert opinion.

When we moved in the whole place had to be rewired and there was so much dodgy stuff the main wire into the fuse board turned out to be melted for example. Everything has been redone now and at least I got to specify where I needed plug sockets.

These cables can’t just go through walls, they can even go through floors

We had empty tubes installed before furniture and hifi moved in, that way the cables disappear into the wall and only re-appear underneath the speaker stands. 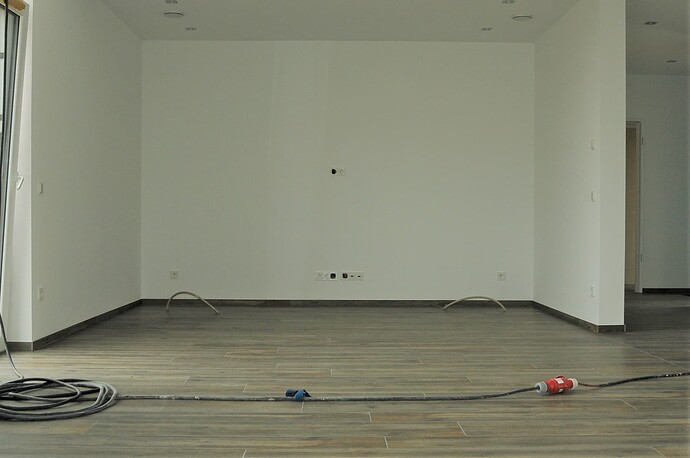 If this installation is permanent then there may be a requirement to use Low Smoke Zero Halogen cables. Other enthusiasts who’ve ‘hidden’ cables in walls also need to pay attention to this. Some details here:

In terms of position behind a fireplace, it depends on the heat to which they will be exposed (as I said in an earlier post). As far as performance in a fire situation is concerned, it depends where the cables are - if buried in a wall having a degree of fire resistance the performance in the event of a fire is less relevant than than the same cable inside the room, which by your argument would mean all exposed cables should be LSZH…