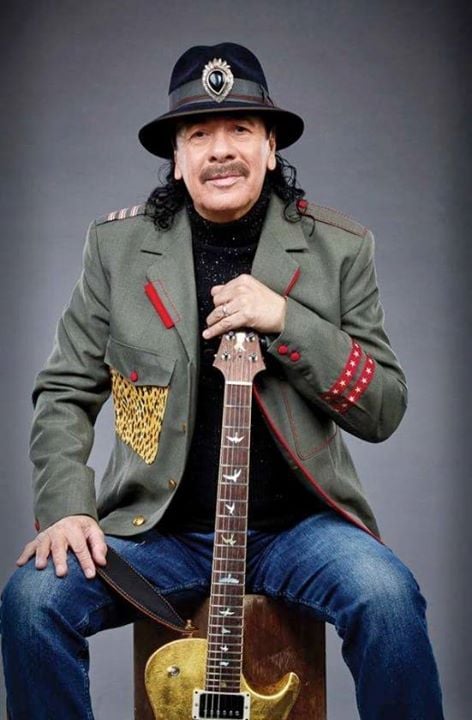 I have many music-memories from this legend.
For me,.it started with the famous song “Black Magic Woman”.

•How did it start for you.?

I’ve known Santana for a long time. I knew about them from people I met from US & I imported the 1st LP ‘Santana’ that arrived with me at about the same time as the first film of them at Woodstock came out. That was how I started listening to them as a serious group of musicians. When they first started they were called The Santana Blues Band, but the blues-boom was over & along with the name change they started to experiment with jazz & incorporate their own natural Latino styles.
I continued my interest with them through the good & bad years, the old LP’s have all gone & I now have all the releases in ripped CD’s or high-res downloads.
The latest album release ‘Africa Speaks’ takes the continuous experimentation further, however as a keen African music listener, (for me) they have not captured the feel of the continent & I am not convinced about it as a Santana album.

Also please note that ‘Black Magic Woman’ was composed by the legendary guitarist Peter Green & released as a Fleetwood Mac single & in the album ‘The Pious Bird of Good Omen’ in 1969
Santana released Black Magic Woman on their 2nd album ‘Abraxas’ in 1970 & it was sung by Gregg Rolie, who I’m pleased to see is at last back in the band lineup

I have both discs,.Santana and Abraxas.
If I’m going to be honest,.I think it was Abraxas that I bought first.
•Peter Green,.funny that you mentioned him,.it was a long time since I listened to him.

An absolutely wonderful musician and songwriter.
I have many discs with Peter Green,.so it might be time to pick out some.

Much like you i keep with him for the odd gem of an album. The first ones are my favourites, Caravanserai in particular. But glad to see he still tours.
I saw Santana at Wembley stadium and other times, i am guessing 35 years ago or so. On one occasion we missed the last train and buses out of Fenchurch St station. Spent the remainder of the night in a phone box to keep warm, got the milk train home.
Still great concert and memories, never heard “Song of the Wind” live…my one regret.

Back in the ‘80s I saw Carlos Santana and Gordon Giltrap play together in Brighton. The front row seats we had were so close to the stage that I had to choose my neck angle carefully not to look up Carlos’s nostrils. Great gig otherwise. I was introduced to Abraxas whilst at college in the early ‘80s and have loved the early work ever since.

Yes a bit bizarre, but I think I understand where he’s coming from; to hear Santana’s version for the first time I can easily understand it will be a “whoa !! who’s that?” moment & its gets imprinted.

There are some great tracks on the LP he did with John McLaughlin.
I first got to know Santana when my sister bought Moonflower and Festival when she was at Leeds Uni in the late 70s. Amazing rhythms and percussion and the whole band jamming on long driving tracks…

I was 15 years old when I heard “Black Magic Woman” the first time,.and bought direct the disc Abraxas.
When you are 15 years old,.I don’t think many sit and look in the small print text,about who has written the song…or how.

Carlos Santana with “Black Magic Woman”,.
became equally associated with each other,as Tina Turner with “Proud Mary”.
This is despite others writing both songs.

Then a little tip in terms of different language-cultures.
You in the UK,.use quite often words like “nonsense” and “bizarre” etc,etc.
In any case,.you do so on this forum.

If I were to use these words against another Swedish person here in Sweden,.well then he would be very angry and insulted.
Something that you in the UK might take and think about.
For it is better to learn from each other,.and evolve together.

I used to love Santana - but in the late 70s I saw him in concert in London. He spent the entire set with his back to the audience and it still ranks as one of the worst gigs I ever went to.

He spent the entire set with his back to the audience and it still ranks as one of the worst gigs I ever went to.

It is not uncommon,.that he treats his audience arrogant and rude.

I saw Santana a few years ago in Dubai, I don’t recognise this problem.
First thing, as I’ve also seen with the band so may times on video, is that Carlos is not the front man, he does not sing other than accompany & although as band leader & directing as such he stays as part of the group until a guitar lead or solo.

Santana for me always means ‘Abraxas’ and the wonderful ‘Samba Pa Ti’ which I played almost to death in my student days in the early to mid 70s.

Santana’s version of ‘Black Magic Woman’ is pretty good, but nothing can beat the original Peter Green and Fleetwood Mac version.

I stopped listening to Santana for quite some time, but have really enjoyed some of his more recent stuff courtesy of Tidal.

‘Song of the Wind’ is one of the best tracks from Santana. I saw them play this at Wembley Arena (Empire Pool) on 4 Nov 72 when they introduced ‘Caravanserai’, which was a step change from ‘Abraxas’ and ‘III’ - and a bit of a surprise for Santana fans at the time. Gets plenty of ‘airtime’ on my system, along with ‘Abraxas’ and the later ‘Supernatural’. The original vinyl pressing of Caravanserai is far better than the first CD issue, although I now have it on a remastered Hires.

Lucky you…must have been amazing👍

I’ve never really got into Santana, I have Abraxas which I like, but I love this…

I’ve seen Santana many times live, you won’t be able to sit still.
Everthing he’s put out is amazing, never gets old.