Hi most are already aware that (hopefully) we’ll be building in the next 6 months or so. With that in mind I’ve got to start getting details about what we want and budgets. Builders by nature will only use the cheapest of anything if you don’t stipulate exactly what you want. As I have a chance to use the best internet cable I can I am struggling to work out what brand and what type to use. I’ve heard a lot of talk here about Blue Jeans which I can get by the roll, also we’ll probably need about 150lm. We also get good internet speed with fibre to the front door.

Welcome any advice. Thanks in advance.

There was a thread recently on thiis subject, possibly this:

If you were wiring a brand new house build how would you be adding cables behind stud walls I’m thinking specifically FTTP → Router → Switch and then ethernet cables via trunking to wall boxes. Looks like Cat 6a seems to be best option giving extra shielding. Given phones are on the way out and will be off a router does that need to be considered and also what about security system/camera. Also is POE and idea? Assumption is ethernet would only be used for TV (better than Wi-fi) and NDX-2 ! A…

My son has just bought a house, and wants to install a network for himself and his brother for serious gaming.p, and working from home (muggins here to do the installation,) After some consideration the decision was Cat7, on the basis that it is the most future proof other than internal fibre. Bought a reel of cable - thick but not unmanageable. Cat7 outlets don’t appear to be available, so go e for Cat6, shielded, with a shielded patch bay to link with router/switch. although I haven’t done it yet, I think will be pretty straightforward. Cost is more - but for 2 double outlets and 4 single (including one for mesh wifi repeater).cost for materials (including the patch bay) ~£135. Cat 5 might have been best part of £100 cheaper - trivial when doing up a house. 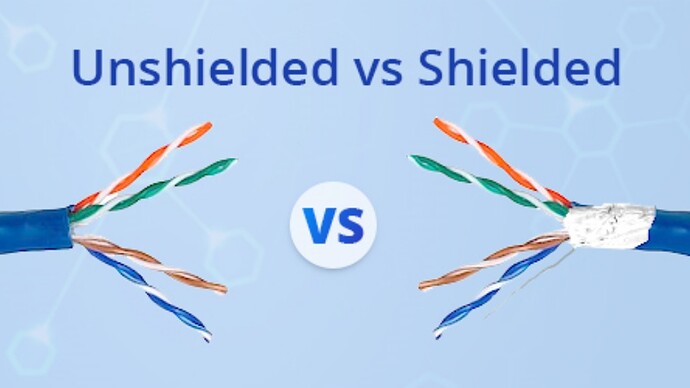 Cat6a Shielded vs. Unshielded: Which Is Better for 10G Cabling? | FS Community

Cat6a Shielded vs. Unshielded, choice depend on your cabling environment and overall budget. Cat6a shielded cable can better handle EMI while Cat6a unshielded are less expensive and easier to install.

Hope Richard is ok with this informational link.?

Not all networks can support the higher speed of Cat6 cables. If your devices don’t support 10Gb networking and you don’t live in a castle using a Cat 6 cable won’t be any faster than Cat5e.

I would future proof, so even if your current devices can’t handle 10Gb, make sure your in-wall cabling can. Cat 6 can do those speeds over lengths up to 55m which is likely plenty domestically. If you have longer lengths (up to 100m) you could opt for 6a.

IMO the nearest thing to future proofing is to install large conduits/tubes so that you can pull in new services in the future.

In reality UTP CAT 6 is likely to be all you will need until wireless takes over completely.

a) Use Cat 6A or (Cat 6 if 6A too stiff) for house cabling - but 6A is designed for infrastructure wiring.
b) Use trunking so you can easily replace cabling and use dual runs if wanted in the future (resilience and or link aggregation)
c) Trunking can allow you to replace with fibre which you might wish to do at some point in the future.

By trucking do you mean running them inside a secondary pipe?

- as opposed to network trunking… so a pipe - or plastic conduit

Cheers that sounds a good idea. Thank you.

Doesn’t Cat 6a provide shielding and would be better behind stud or other wall - is that what you mean by Infrastructure?.

It tends to be stiffer and uses larger cables so has better bandwidth and more suited for applications whete the cable is not frequently flexing.

FWIW, I stipulated our builders to run CAT6a in trunking to each room.

I’ll show up one day while the sparky is working and check the cable spec and the trunking. I’ve been burned by paying for one thing and getting another after it is too late to fix without huge expense and disruption.

I’ll show up one day while the sparky is working and check the cable spec and the trunking. I’ve been burned by paying for one thing and getting another

Equally relevant is the quality/care taken in the installation, avoiding kinked wires, tight bends and sloppy termination. Ultimately a proper test of each run should give some peace of mind, but I would agree it is very frustrating when good product and design is ruined by someone slipping in a substitute, lack of care or lack of understanding.