I’ve been blown away by the sound of vinyl on relatively modest systems, but having never owned any I can’t see me making the transition now. Maybe one day I’ll buy a deck along with my most treasured albums, but that’s a long way in the future if ever.

But I do have a lot of CD’s and tapes going back to the late 80’s, many of which aren’t available on my streaming service. The logical thing would be to rip the ones that aren’t, but again that’s for another day.

But I’ve got some time on my hands and I’m curious to see how my CD player compares in transport mode. My BT box has a good quality Chord optical cable 8m long as it’s on the other side of the room, and it’s connected into my NDS. I’m planning to locate the CD player near the BT box and just switch the cable, so no isolation worries as it will be a long way from the Naim kit. Presumably I can just switch inputs on the pre between CD and streaming service to make an instant comparison between the same two pieces of music? I’ll also try the tape deck on some better quality recordings versus streaming. Just for fun and to kill some time… 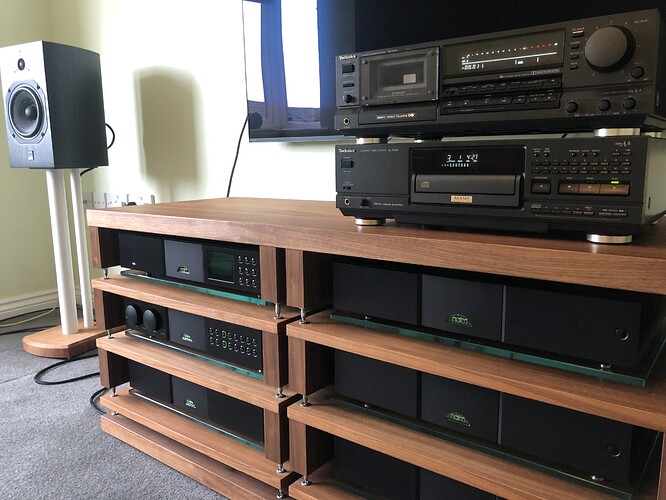 Not the best of their era but not the worst either.

Very fond memories of recording music on my RS-B565

I still have a well-reviewed and little-used Onkyo cassette deck I bought just before CD’s took off. It was mainly for home recordings to use in the car. I wouldn’t part with my vinyl, accumulated over 50 years, or my CD’s,over the past 25 years, but I’d struggle to find many cassettes in the house. I think you’re on a road less travelled, but enjoy the journey anyway.

Those Techniques CDPs were beautifully built. Certainly be interested to hear how it sounds as a transport or even as a stand alone player up against the NDS.

I did briefly try it with its own DAC versus a 272 earlier this year. The 272 wiped the floor with it.

Maybe off topic….I’ve recently converted to lp. I have a beautiful cds2, but it just can’t compete with a 1986 Lp12 Aro etc set up, mids in the cds2 sound nasally compare to the Lp12 not to mention the top and bottom. The cds2 has its moments and serviced me well for many years but it just back ground music now, for serious listen cds2 it’s doesn’t get a look in. I understand things have come a long way since 2000 but still imo not close, I’ve compared the Lp12 to cds3 and cd555 and Nds. Lp is music end of.
Another great happening since my record revolution is the fellowship from other like minded audiophiles, I’ve never had so much support people willing to share and teach about the fine art of setup, record hunting etc It’s rather emotional and has really open that space up in my life. I can’t think of many things in this life that gets me this excited, finding that press in the secondhand store, you just hold your breath and hope to all heaven it’s a good one. Imo best move I’ve ever made. It’s more than audiophile its a life style and sooo sooo much more than what digital could ever bring. Well to me.

Right, sorry guys, big anti-climax. The optical out appears to be dead. When I plug the cable into my BT Box I get sound through the Naim system straight away, but when I connect it to the CD player "no signal detected’

I’ll try an RCA connection into my 252 but based on the previous 272 comparison I did earlier this year I’m not expecting great things. That said the amp and speakers set up was very different back then so who knows…

PS a picture of the actual unit now posted above and yes Lindsay they are indeed beautifully built and age well. The CD drawer is still smooth as silk and rock solid.

OK all working now, it didn’t like the chord cable but with a different cable I’m now using the Technics CDP as transport into the NDS DAC. Unsurprisingly, it’s a very big improvement in SQ over the Technics DAC. Just now I can’t resist listening to some CD’s I haven’t heard in a while because I couldn’t find them on streaming services e.g. an old favourite LTJ Bukem Logical Progression sounding the best I’ve ever heard it. Later I’m going to do some careful listening and will report back; streaming versus CDP transport, both into NDS DAC. Streaming with BT 300MB fibre into Cisco 2960 switch and BJC cable connection to NDS.

Also listened to a few albums on the tape deck and sound was enjoyable and engaging on good recordings which sadly are few and far between in my collection. Most are poorly recorded copies so tape deck will most likely be relegated back to the garage very soon.

Also listened to a few albums on the tape deck and sound was enjoyable and engaging on good recordings which sadly are few and far between in my collection. Most are poorly recorded copies so tape deck will most likely be relegated back to the garage very soon.

That would be a shame! The pic of your two Technics together looks awesome.

With both through the NDS DAC I’m preferring the CD transport over the NDS streaming transport.

I’ve written before about the harsh/tiring edges to some tracks when streaming. The CD is less in my face, a slightly smaller soundstage but more controlled, cohesive and smoother. It’s clearly different and on balance I prefer it.

It’s proving an interesting experiment. It’s making me wonder what I can do to ‘calm’ the streaming input.

Right now it’s feeling like it’s going to be difficult to put the CDP back in the garage and I guess that’s the acid test.

Another great happening since my record revolution is the fellowship from other like minded audiophiles, I’ve never had so much support people willing to share and teach about the fine art of setup, record hunting etc

On this forum at least there is never-ending assistance to those setting up streaming, and everything associated with streamers, networks etc etc., and has been all the time I’ve been aware of the forum. Not sure that it is any more for vinyl? Of course it depends on the threads one reads…

Saturday night drinks is it

Little unsure why you point that out when its a given.

Maybe I misunderstood your post - it appeared to suggest that it was a particular bonus for vinyl users, by implication not as good for users of other sources.

With both through the NDS DAC I’m preferring the CD transport over the NDS streaming transport.

I’ve written before about the harsh/tiring edges to some tracks when streaming. The CD is less in my face, a slightly smaller soundstage but more controlled, cohesive and smoother. It’s clearly different and on balance I prefer it.

Well that is very interesting. @Polarbear !

Interesting, I use an SL-PS70 as a transport - it looks very similar to your player, I bought it back in 1990 when it became obvious CDs were taking over.

It feeds into my Node 2i which in turn feeds my MF V90 DAC. I have noticed that with this combination I’m more inclined to listen to whole discs rather than skipping through as I did when using the player’s own DAC. The Node allows remote volume control, which my NAC 72 obviously doesn’t have. I find this more necessary with CDs than LPs as track to track volume can vary a lot.

I’ve had a couple of issues on my deck - the eject got very noisy, eventually fixed with a squirt of GT85 into the small gears under the tray. Also the spindle motor needed a couple of drops of fine oil when the player was struggling to read discs. In that era the cheaper Technics models were built in Europe and used a Philips swing arm mechanism that failed after a few years. The higher end models, like mine, were built in Japan and used a Technics linear sled mechanism which seems a lot more reliable.

Back in the day when external DACs were first getting popular I tried the Arcam BB5 (I think) with my player at a dealer. Playing a few tracks they all sounded flat as a pancake. Because I was unfamiliar with the system they were using I got them to connect the player’s own DAC as a comparison. Suddenly the sound opened right up. I said to the salesman “wow, that’s better!”, but he just looked at me stoney faced. I didn’t buy the Arcam…

Perhaps you would be so good as to clarify the point you had been making?

No, I’m not your mornings entertainment.

Having slept on it I feel I’m too invested in streaming, and too spoilt by the choice and ease of use, to go back to CD. I’m going to leave my CD player set up and use it as a reference point as I try adjustments to my streaming set up to try and tame it’s slight over-exuberance.

Don’t get me wrong, the NDS sounds fantastic fully utilised but I do prefer the slightly more controlled delivery from the CD transport.

Looking at your player they do look very similar and mine’s also a Japanese build. The CD drawer mechanism looks, feels and sounds very solid to this day. It’s a very nice sounding player in its own right, but no match for the NDS DAC with a 555DR up it!