In 2018 bought the Media player ND5XS2, I found that using the digital signal from CD5XS (as transport) to DAC of the ND5XS2 gave a (much) better sound quality than the analogue from the CD5XS.

A few days ago bought new NAC282, NAPSC and HiCap DR. The HiCap supports the NAC282. I have replaced Link in CD5XS and using it as CD transport with digital (SPDIF) signal to ND5XS2. Sounds very good (though NAC282 not run in yet).

Now the question? Should I sell the Flatcap XS as it may be redundant since it appears that the analogue circuits of CD5XS are not now being used? Or is the situation more complex and Flatcap power supply support of the CD5XS still provides an increase in sound quality? (Actually I’m stuck for more shelving if it should retained but all sacrifices must be made.

What does it sound like with the flatcap removed? If you can’t tell the difference you have your answer.

You’re right @Traume, the FC is redundant when using the S/PDIF output of the CD5XS.

That’s brought an abrupt end to the psychoacoustic experiment.

Some have found that external power supplies can boost a source being used for digital output, so while in theory it should make no difference in practice it might. Presumably as you’ve had two years to test this for yourself, you must have your own view. Does it make a difference?

Now you have a 282, you would do well to investigate upping your streaming source. A NDX2 would fit nicely and can be further upgraded with an external power supply. But not your Flatcap unfortunately.

No harm in trying but the FC only powers the analogue output board so any benefit (eg reduced load on the internal supply) to the S/PDIF would be minor.

Edit - this did come up before.

CD5XS as a Transport into ND555 Hi-Fi Corner

There was a similar thread on feeding a CD5XS into a NDS but that has been closed. I have just picked up a newly Naim serviced CD5XS to replace (possibly) my venerable CD5. My CD5 is powered by a FlatcapXS then feeds the rest of my system (252/SC/300DR into Shahinian Obs2) via a Whest dap.10. Although vinyl is my principal source (c2500 LPs), I have over 600 cds and there is something wonderfully tactile about placing a disc on the lovely Naim cd drawer rather than streaming via Tidal and Qo…

To my ears a FCXS made no difference at all to my CD5XS when used as transport. The only reason for hanging on to the FC is if you wanted to use the CD5XS analogue out, perhaps in a second system. I’d consider selling it and putting the money towards an nDAC, which would go nicely with both your streamer and CD player.

To my ears a FCXS made no difference at all to my CD5XS when used as transport. The only reason for hanging on to the FC is if you wanted to use the CD5XS analogue out, perhaps in a second system. I’d consider selling it and putting the money towards an nDAC, which would go nicely with both your streamer and CD player.

Many thanks to Hungary Halibut, James_n, Bartman, PeakMan, Antonio1, Richard.Dane, et al for all their discussions and recommendations. With engineering background (not electronic), am appreciative of their design, test and operational experiences (OPEX) of Naim equipment, etc. Also, thanks for the earlier relevant thread.
The point at issue. Does external power supply improve sound quality from CD5XS even though it is providing digital signal output only? Before the recent removal of NAC202 and Flatcap XS from my system, I had felt (possibly wrongly) that this was a no-brainer: keep both power supplies of Flatcap XS connected, i.e. to NAC202 and CD5XS. I did not perform tests to confirm. Certainly, the quality of music from CD5XS /ND5SX2 is tonally much better than CD5XS. I use Spendor A6R speakers with 40cm separation from wall.
With the recent upgrade to NAC282, HiCap DR, and NAPSA, I found that HiCap DR can only be used to support one piece of equipment even though the NAIM website says:
HiCap DR Features - Two 24V power outputs
All-new Discrete Regulator (DR) configuration, delivering Naim Audio’s best-ever standards of stable, low-noise power
Bead-blasted, black-anodised aluminium chassis plus anti-vibration, resonance controlling feet

So now I have excellent power support to NAC282 and now the potential to provide two supplies to CD5XS where none may be needed for best results.
Interestingly, Community Members discuss 3 possibilities:

Socket 4 does have 2 x 24v outputs. That’s different from being able to power 2 different units. 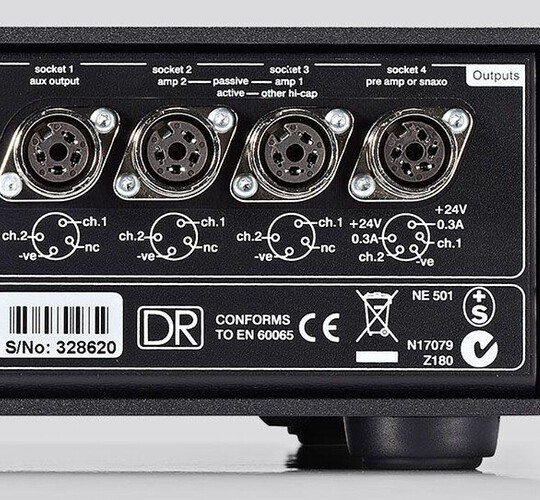