Going through my stuff in the loft and garage, I found a few old Beano annuals. They were in bad shape, all bent and post mouldy so decided to put them in the recycling bin.
Thinking about it I used to have a huge stash of them.
Growing up in the 1970s and 80s and having perhaps too much pocket money, i used to like and collect all of them. This was a great time for comics with so many to choose from at the local newsagents, grocery stores, Woolworths and pretty much anywhere that had space to sell them. They were everywhere, and at 5p to 12p a pop. Not like today with just a few hangers on selling for £2.
Would also go to local jumblesales. If i got lucky I would pick up big bundles of old and really old comics for just a few pence.
But, like vinyl records, they need to be stored correctly and take up a lot of space.
I guess growing up, leaving the home nest and spending a good few years in the wilderness before getting settled. Leaves the responsibility over them to others, who most probably used them to start the fire or passed them on to charity/jumblesales.
I sometimes trawl the internet and look up the titles. Whizzer and chips. Monster Fun. Nutty. Of course beano and dandy. Not so much the American Spider-Man and others.
Interesting to reacquaint myself with lost charecters. Face-ache. Pongo Snodgrass. Gums…

Anyone lucky enough to still have a sizeable stash stored away ?

Different spin on the same story, in the sixties Dad was in the forces and we were posted abroad.

Mum took great pleasure in throwing out my collection of American comics such as The Flash, Batman as she called them “rubbish” . It was at least a foot high.

Cut forward to the mid 1990s I am in the Virgin Mega Store in Oxford Street and there is a section devoted to vintage American comics , and there is a cover I recognise and once owned - it’s The Flash and what I bought for coppers is now on sale for seventy pounds

And you have your mum to thank for that rise in value. If we all had the foresight to see what stuff would be worth 40 years hence we’d all have kept everything, hence no value. I occasionally rue scrapping my first car, a past-its-best Mk1 Cortina - they go for a few grand now in any condition. The Lotus Cortina that I could have bought for £500 in the early 80s and which I rejected due to insurance costs, would now be worth £50-100k, depending on condition. Obviously it wouldn’t now exist as it would have ended its life sideways into a ditch.

@TOBYJUG When I was growing up in the 70’s my best friend’s dad was a Beano, Dandy & Topper artist drawing ‘Mickey the Monkey’, ‘The McTickles’ & ‘Plug’ amongst others.

He’d get the script on a Monday morning and set to work on an A2 ‘Bristol Board’ on the easel in the living room. At his side was a tower of Benson & Hedges fag packets and a bottle of Famous Grouse. He’d get through the bottle and 60 fags in a day.

By the Thursday you could cut the air in the room with a knife when visiting for a preview of what was going to print. 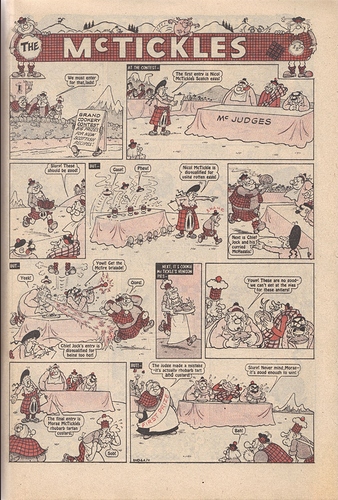 To expand, I think it was Danny Baker who mused on this on his show and invited callers on to discuss collecting old magazines & periodicals. The clear message was that in general its not worth it - he had people on who had saved decades worth of The Engineer magazine, or musical pubs like NME & Melody Maker, and couldn’t give them away. There might be the odd one that does have a value or the market for it coincides with its audience having the inclination and disposable income to pay good money for it, but by & large the value of a collection is zilch.

I have a few early copies of When Saturday Comes, incl the one that welcomed the new-fangled Premier League. I’ll put them on eBay one day and see.

My mother threw out many of the things I had - Dinky toys, SciFi books, and a complete collection of Aeroplane magazine from WWII - which I really wish I still had.

There was some publications that offered at the end of the year a Glossary and hardback binder.
I believe we had some about DIY, Woodwork and other practical things that were thought to be useful as a reference. Ah the days before the internet.
I have a not inconsiderable sized collection of hifi magazines. I went through them recently and sorry @Naim.Marketing decided to bin all the WHF ones.
You see classified adverts occasionally selling hifi mag collections, so I guess there is some value.
Still, I’m not sure I want to go over short reviews of budget cables from 1995. Although I’ve kept all the hifi news as they always run interesting articles.

In my youth I also used to take the Beano etc and I have some very fond memories of reading these publications. Sadly they are just memories now and I have no hard copies. I also used to get the Meccano Magazine on a regular basis as I was a great Meccano fan, again the magazines are no more but last year I found a set of 3 CDs on eBay which had pdf copies of every single magazine published (dating back to September 1916). I am still working my way through them! What I can’t believe now though is how sexist the earlier publications were. Meccano was definitely for boys and boys only, the idea of letting a “mere girl” build something was taboo!
cheers

Yes - although to give my parents their due, both my elder sisters had Hornby Dublo trains, and at some stage had Meccano - but they lost interest (or what interest they had) and I had to buy it all off them with my pocket and birthday money.

There is a small collections of barns in a village near me that sell all sorts of stuff under the guise of an “antiques market”. Whenever I am over there I have a potter around in case of some long lost vinyl treasure will be there (never happens funnily enough) but the one thing I have noticed is the demand/price of older adult magazines like Playboy. Most seem to be £25+ which compared to any “normal” magazine of similar period seems to be a huge markup.