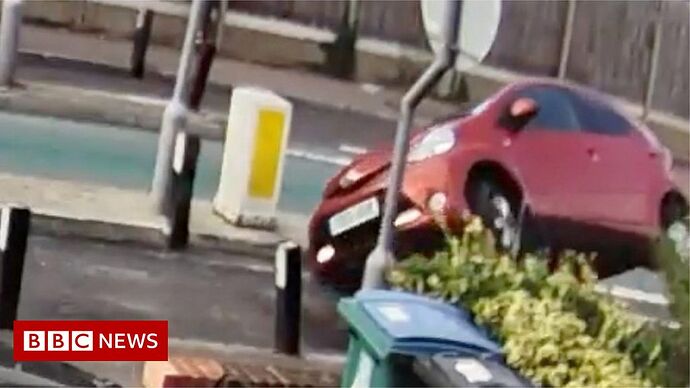 Cars written off by road bollards caught on camera

A number of vehicles including a police van have been seen colliding with the width restriction.

Contravene the restriction and your car is toast, possibly you too!

This brings back memories - have just renewed insurance and renewal form is much more legible but describes ‘you hit 3rd party in 2006’ - no, my vehicle was written off by a faulty/damaged upturned ‘manhole cover’ after a bend on a dark unlit country lane I used frequently which was little larger than a sheet of A4, much of it in the hole!

My fault as insurance company didn’t think they could identify who it belonged to and claim from them, or at least not worth their time and effort to do so. Must try and find a picture as it was in the same state the next day - I informed the police it was a danger to other vehicles but boys in blue had no interest whatsoever in preventing further accidents - our car vaulted to the other side of the road, airbags deployed, oil sump ripped from below and cracks in the engine block identified by the inspector/loss adjuster who felt it uneconomical to repair, all at comparatively low speed. In fairness we got a good ‘market value’ payout but far less than the car was actually worth to me in practice.

Changed the name of the thread, as there are so many locally (PCN thread comments earlier) that even if well-intentioned I think they create hazards which are potentially worse than those thet are trying to prevent.

Probably introduced by the same f**kwits that think E Scooters are a great idea.

The ‘pay as you go’ community bikes in our city have been removed recently - too many have disappeared or been vandalised apparently!

Probably introduced by the same f**kwits that think E Scooters are a great idea.

I’d actually love to try an e-scooter, but so many people have ‘pimped’ them to go faster or have no common sense on the road (or pavement) they are dangerous, but local plod seem disinterested in applying the law to these currently illegal modes of transport on public roads.

The gap is 7 feet wide so certainly the smaller vehicles in those clips should pass easily. Maybe if they slowed down a bit first?

The main problems with e-scooters here in Munich are:
(a) people terrorizing pedestrians by riding them on the pavement (they’re not allowed to)
(b) people using them while under the influence (points off the license if caught)
(c) people parking them in hilariously inconvenient places, causing maximum hassle to others

Other than that, what’s not to like? Transport of the future, innit!

The gap is 7 feet wide so certainly the smaller vehicles in those clips should pass easily. Maybe if they slowed down a bit first?

In all honesty, my personal view is that town planning is destroying lovely wide roads whcih had plenty of room for a single lane of traffic in each direction - here looks as though they’ve created 3 lanes where there would have been two before - central bus lane.

I’m not anti bike or public transport I just feel there are too many bizarre compromises (at least locally) when trying to implement additional lanes when I suspect older wider lanes were inherently safer and less distracting to drive along.

All those road narrowings where you or oncoming traffic has right of way are designed to slow flow and make a crossing shorter for pedestrians but I honestly believe that a lot of the time it just results in cars racing to get there first so they don’t have to stop.

Lovely roads in established cities/towns are simply being ruined by well-intentioned ideas which make driving more challenging and make streets pretty ugly due to the proliferation of excessive signs/street furniture.

I agree but many of those don’t seem to be going that fast, I think it’s surprising how low velocity impacts can really cause damage when one of the objects is barely movable.

The main problems with e-scooters here in Munich are:
(a) people terrorizing pedestrians by riding them on the pavement (they’re not allowed to)
(b) people using them while under the influence (points off the license if caught)

Other than that, what’s not to like? Transport of the future, innit!

They’d be great for short commutes provided the roads or paths they are used on are well maintained and pretty flat without humps or potholes which could cause real mischief due to teh small wheels unless you were someone with stunt ability!

In the UK they are currently illegal unless as part of an urban ‘trial’ and many people simply claim they do not know this. The police seem to have little interest in those using them illegally though I have seen reports of confiscation recently. There does seem to be a disconnect between these scooters which are freely available to purchase and user expectations - most will not have a private road to use them on.

The blind have expressed significant concerns about them being used on pavements and you can understand why.