How come football has started so early, there’s still a mouth of your summer to go. I’m guessing it’s the WC.

Football having such a long season isn’t helping cricket, it’s like a spoilt child wanting all the attention.

Yes Pete, starting a few weeks earlier so 1/12 ‘gap’ for the World Cup. I imagine the season finishes a bit later too.

The domestic cricket season doesn’t actually finish until the third week of September so more like 7 weeks left.

Last year the PL footie started 13th August (I think there was a break for internationals etc), this year was 5th August, doubtless influenced by the break needed for the WC. It’s been getting earlier in August, some teams (IIRC) have even played European qualifiers by now (e.g. Scottish clubs).

IMHO, this has crowded-out other summer sports and one can see why the ECB thought The 100 was required i.e. get families involved in the school holidays, and generate interest in the game overall.

Sadly (IMV), football in general is a spoilt child (too many behaviours to list here), although much of this is down to the media and their appetite to broadcast, stream, print any old micro-analysed rubbish.

The main codes of “football” don’t start till mid autumn and generally finished by the end of September leaving plenty of time for the cricket season. Actually there’s a gap been the end of the season till cricket starts which helps with a build up.

Just watching (12-25) the CG women’s cricket between England and India. India look to have batted well but England’s fielding has been (to the standards of a club player) comical and the field-setting unfathomable. England are going to do very well to win this and, if they don’t, the post mortem on some of the fielding and chances dropped could be painful.

Shame – the women’s game can be so good but also so poor (to the definition of ‘all the gear and no idea’).

Bizarre – England leave their (relative) big hitter in Sophie Ecclestone until too late in the order (6 off the last ball). Ultimately, a game England ‘lost’ IMV, both in conceding too many runs, and then not chasing hard enough.

I’m really conflicted in how a professional team make mistakes in terms of run-outs (and dropped ‘dolly’ catches), which are basics drummed in to you at 12/13 years of age.

ENG came close but IND held their nerve at the end. IMO the game was really won by the IND spinners. I don’t see IND beating AUS in the final.

Just seen Hales take a blinder …
I wonder whether more spectacular catches are taken in the short form versions of the game than in Tests?
I suppose risky shots are more likely to result in ‘out’. Just musing …

Seems the ‘comments’ on the BBC bear out what several of around here think too. 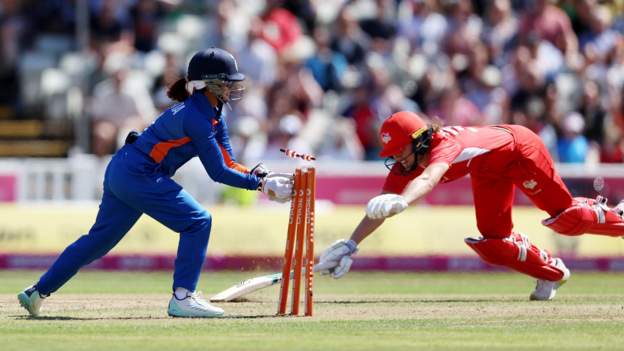 England's hopes of winning Twenty20 gold are over after they fall to a four-run defeat by India in the semi-finals of the Commonwealth Games.

Well this match was closer than I expected it to be. IN-W couldn’t hold their nerve this time. For a while Ii looked like they were in the hunt for gold until a spectacular collapse. Something similar happened to them in the 2017 World Cup final against ENG.

This IND -W side look like they’re short a genuine pacer or two. A winning temperament would help too.

Yes it was close but this (Aus) team has a habit of winning.

Good to see a competitive game though.

IMV it was a good watch, played by 2 teams with decent cricket brains around field placing (unlike England this time) and good classically-based batting techniques (unlike England), something their men’s sides share. Some good fielding skills too (unlike England).

As you say, once you’re beyond Harmanpreet Kaur, the batting quality falls away quickly. I watched Harmanpreet get a monster score in the ODI WWC and she’s a special talent but seems to find ways of getting herself out.

In the T-20 form, I think India’s (dobby) spinners are OK, in that in the women’s game, they like pace on the ball, hence why the Aussies had a slow bowler for the last over. The Aussies don’t mind spin as, by & large, they’ll use their feet and hit over the top straight(ish). England got flustered by this in the SF i.e. not trusting their skills, and being bottom-hand dominant.

I’m not a fan of the concussion sub batting higher than 10/11 though. That’s not fair to me.

As for England, let’s just say they imploded against NZ in the P/O. Following day blues perhaps.

That they do Pete – and they don’t panic. Worthy winners.

The only solace from the day was England women beating the Hockeyroos – only just!..although the men’s team beat us, just for a change, not!

We have to let you win something.

Mrs Pete got up early to watch the netball final, she was surprised and a little disappointed how anti Australia the crowd were. They made it quite clear they were supporting the Jamaican side.

England also lost to the Kiwis in the netball P/O, so another bubble burst

…think 2005 in the cricket and what followed soon after!

Unfortunately though, when we win here (as with the women’s Euros), there’s always a clamour to go OTT and give out gongs, totally missing that every dog has its day sometime, even the scruffiest.

Tbh winning the Euros was a big deal, the women managed to do what the men can’t. Guess the press tend to blow most things out of perspective, we’re not immune to that kind of rubbish here as well. Asan outsider I have noticed that the UK press is extremely hard on the team/individual if they lose.

They made it quite clear they were supporting the Jamaican side.

Personally, I thought that it was not anti-Australian rather pro-underdog, which is a British trait. But there might have been elements that Mrs Pete spotted.

I was disappointed with the way the England ladies played in their last two games. Perhaps the attitude of England’s men’s team is contagious?

I didn’t see it so I’m only going off what Mrs Pete thought. She’s normally a lot more level headed than me, so it surprised me when she made the comment. We too have a record for supporting the underdog so I get that but I do feel in sport there is a little bit of fiction between mother England and the colonies.

Could be particular sport’s followers? - just watching hockey Eng v RSA where there is a bit of niggle between players. Seems to be good atmosphere amongst crowd.

Could just be paranoia too