DACv1 and other options for CDX2-2

I’m considering DAC options down the line and notice that there seems to be more love for the original Naim Dac than the more recent Dac v1. However in general neither seem to get much airtime, is this because most add a streamer and use that over a dedicated Naim Dac, from a Dac perspective are the two comparable from SQ POV?

If it’s any help I used an Ndac/power supply with a CDX2.2 for over a year and found it to be extremely good. I eventually replaced the CDX2.2 with a CDP555 but I’ve still kept hold of the Ndac. It’s very versatile piece of kit and allows me to connect multiple sources such as my sky box, TV, DVD, and streamer to my 552 via one single connection. I did listen to a Chord Hugo 1 for a week, which was very good but I much preferred the drive, depth and rhythm the Ndac seemed to exhibit. At current ‘used’ prices they must be considered an absolute bargain and well worth the investment.

Cheers for the reply, seems to echo what prompted my initial question, the original Naim Dac is held in high regard. My puzzle is that from looking at interviews and reviews on the more recent Dac-v1 it seems to have been built on its predecessor and yet doesn’t seem to get same love/regard.

Currently lots of deals to be had on the V1 for brand new but discontinued model so feels the logical place to head, just reticent because of the disparity in regard when compared to the original.

I had DAC V1 for a few months and thought it was fantastic. I noticed a huge jump over the old CD5XS straight away.

I think the disparity is because the V1 was considered the cheaper/baby brother alternative to the Ndac. It may be the newer version of the two but the Ndac offers a lot more potential performance.

The NDAC is considerably more capable than the V1, as you might expect given the higher price. It’s also upgradeable with external PSUs which raise its performance significantly - the V1 was never intended to replace or compete with this, or to provide the same level of connectivity.
The V1 was primarily developed to fill a gap by providing a USB DAC for those who wanted to use a computer for audio, so quite a different use case, thus the shoebox size rather than a full width case designed to sit on a hifi rack.

Hi Chris, I get the perceived price / performance argument, just from doing some initial research found a review / interview by Paul Rigby with the designer of v1, Steve Sells, and seemed to indicate it was an update on the ndac foundation, with some additional use cases.

It then got me thinking that more lean towards a streamer (and use the Dac function from CD source) of that and why Naim don’t produce a solo dedicated Dac anymore.

So was genuinely interested what others would do if looking to stay in Naim camp and add Dac functionality to an existing setup.

Hi Adad, I guess the reason Naim no longer produce a standalone DAC is partly down to the fact that their streamers all have built in DACs, which are in turn upgradeable with external PSUs in the higher models, and that this is where their (not unlimited) R&D attention has been focussed in recent years. In addition to this, the TI DAC chips around which their products are built are considered old hat now. Indeed, the top-of-the-range chip they use in their highest end products, including the NDAC and the ND555, is a discontinued product, and Naim had to stockpile a large number of them in order to release the ND555.
If they produce a new standalone DAC it will, I guess, require a ‘back to the drawing board’ approach. Behind closed doors, I would guess that this is a project that’s already underway, as they have no choice but to move on. Time will tell.

Cheers Chris, makes sense, I faced similar dilemma recently when part ex’ing my Cdx2 for a as new as could be Cdx2-2.

At the time conventional wisdom might have been to invest in a transport, such as Audiolab, and then in all probability the all conquering Dacs from Chord.

The clincher for me was just that I like the sound of Naim digital and was looking to future proof as much as I could the viability of my Cd front end, so plumped for the Cdx2-2.

If you search in the old forum, there’s a thread by a well-respected dealer (sadly now passed away) comparing CD5XS and CDX2.2 with and without nDAC and with various power supplies on the DAC. Might be worth a read (I think “a dealer writes” was somewhere in the thread title and it was shortly after the introduction of the nDAC).

FWIW I ran CD5XS/nDAC/XPS for several years before getting into streaming. It was a fine front end.

From my recent personal experience of dipping my toe into streaming, I think you are on a great path.

I’d be connecting my CDX2.2 to the Ndac via Naim’s DC1 coax. I’d then invest in something like a Blue Node 2i with either an optical or coax connection to the Ndac. This should give you a fantastic level of performance for both CD and streaming formats. I use the streamer via Qobuz to find music I like and then order the CD if I really like it as the CD still give me better SQ.

What’s good about this route for you is that any upgrades to the Ndac (Hiline/Powerline/Power supplies) benefits both sources.

Cheers Roger, yes I saw that thread the other day and it further piqued my interest in the disparity in adoption of the nDac vs Dac v-1. Very interesting article and great structured approach to the whole upgrade path.

Think I also remember reading a few threads on the merits or otherwise of PSupplies on the CDX2 anyway, with many preferring the sound without.

Guess the conclusion is that the nDac and Dac v-1 are different beasts and I won’t be tempted by the end of life sales that you can find on the Dac v-1.

get the nDAC, the best Naim product ever released.
555ps would later lead you to the end of the game ,what’s not to like?

V1 is at the heart of my system, and is very good. But it’s best if using a USB source/streamer such as an opticalRendu and one needs the preamp function. Otherwise the nDAC would be the better choice, or a DAC from somebody else altogether.

Duck and cover Antonio! It shurely were the SBL’s.

Not so universal, I’m afraid
Ndac is the least Naim sounding equipment

This is how the DAC-V1 was envisaged to be used and it’s simply brilliant in this role: 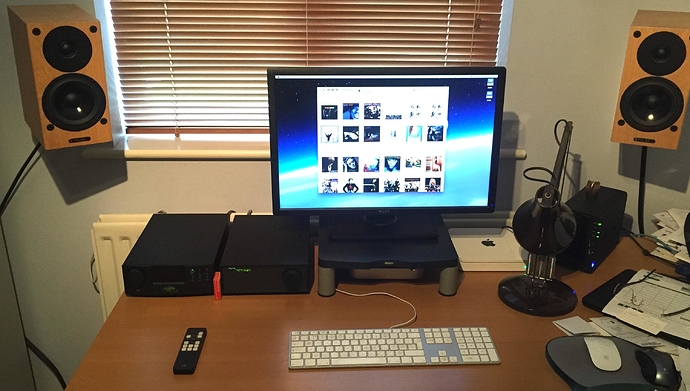 The original Naim dac is normally used in a main hifi system (of Naim classic components) and has a considerably higher performance potential, especially when boosted with an external power supply.

It would be logical to add an original Naim dac to your CDX2.2. At a later date, you could then add an external power supply to it or to replace your CDX2.2 with a “pure streamer” such as one by Sonore, Cyrus, Auralic, the DCS Network Bridge or the rather excellent and strangely ignored Moon Mind 2.

Lots of choices but in a main system of Naim classic components, the original dac would be a more appropriate choice than the DAC-V1. I say this as someone who has had circa 8 years of unqualified, reliable joy and delight from the DAC-V1 in our office system.

I’ve got a pair of 805’s coming back to me after a lengthy loan spell to a mate, so have already been wracking my brains how best to use.

Thanks for the reply, much appreciated and has now confirmed v1 is not the way to go for my main Naim system.

I beg to differ. An nDAC coupled with a matching power supply offers an excellent Naim source with a large number of possible connections. My nDAC is powered by a 555PS and fed by an NDX, Sony TV, Sony universal player for optical disks and a Bluesound Node 2. It is connected to a NAC252 via a HiLine interconnect.

It handles all file formats up to 24/192 with aplomb. The nDAC is definitely here to stay while the transports can be upgraded in line with technical improvements.

There is a whole world out there. If naim have chosen not to release modern dacs perhaps there is other options. Just saying.

Dacv1 is useful in that it has USB input, which may be a consideration. But as I say whole world out there beyond this forum.