So the bmw 1 series cabin heating failed thenb an engine light came on- 2016 40000 miles full service and now a £961 bill from a bmw independent. God alone knows what the bmw price would be… 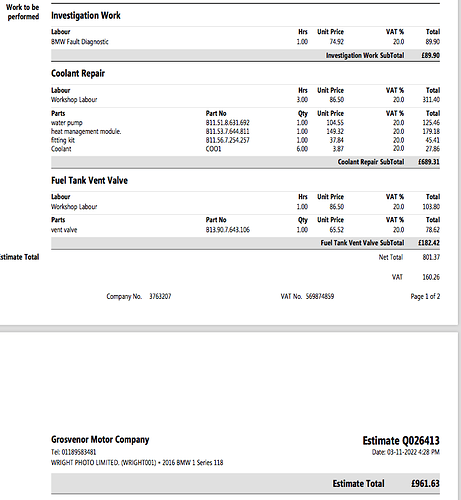 Cars have got far more expensive to buy and run!

I can help you to reduce your future bills.

Since ditching the BMW’s (other expensive to run makes are available) and getting ordinary cars/vans, our vehicle costs have plummeted.

110 quid an hour! And 90 quid for someone to plug in an OBD scanner

The OP states that it was done by an independent.

Get an EV! As far as i can tell the only service items on mine are brake pads, brake fluid and a cabin filter!

Yes. A BMW independent. I take that to mean still tied in to BMW. I’m talking about a truly independent garage, one who can and will take on any make of vehicle. One who is not beholden to manufacturer policy.

So not an independent then.

So after a very long wait on the phone to local BMW say their diagnostic charge is £99 (fairly similar)
but the labour rate is £168
MAD!
its a bmw independent where the car is now for the repair

I drive a VW. My servicing & MOT’s are done by a VAG independent. Their (labour) charges are nothing like those in this thread - thankfully…

I use a Volvo specialist and their hourly rate is around £75, a dealer would be way more. Got to pay for those snazzy premises.

Ours uses genuine Volvo parts but discounts them plus they look at solutions to avoid high costs, but sometimes there is no way round.

Our Volvo is is from 2013, done nearly 120k and has no real value but to get rid of would be a waste of perfectly good car and more expensive to replace. However, we set a limit on repairs of £1800 a year. Anymore or major failure and then it would likely go.

I feel that any bill stings but you’ve got a better deal than going franchise, 20% isVAT and much is labour.

Having work for a major car manufacturer in customer service 40k miles is low but components age just like us and Naim.

BMWs are not the only cars that go wrong! I bought my 1 Series ten years ago, and after 150,000 miles I have had to replace virtually nothing.

We use an independent garage for servicing our cars. We started with him when he worked on his own, found him excellent and very cheap. Over the past 10 years his business has expanded, and he has 2 other mechanics and a part time receptionist (but is still full time hands-on himself). Quality of work still seems excellent, though costs increased considerably as the business expanded.

As for car reliability, the family we have two Toyotas and one Audi, now 15, 19 and 21 years old, owned so far for 13, 17 and 4 years respectively. Other than routine service and consumable replacement, the first Toyota has had no breakdowns other than when the battery died and no major work required. The second Toyota no breakdowns but one expensive job when its head gasket needed replacing 3 or 4 years ago, which for some reason in that car is a big job and so very expensive because it requires taking the engine out (unlike when I had a Hillman Hunter that regularly blew head gaskets, replacing myself, experience getting it down to just an hour or two). The Audi had a rear suspension problem a year or so after we got it, but not too expensive to fix, and a niggling engine problem causing rough running on starting in damp or cold weather, eventually traced to tinkering by a pervious owner who had played with the ‘mapping’ but failed to do something matching with a solenoid valve the computer wanted to operate, and an airbag problem has arisen now.

We generally buy young high mileage with good maintenance record, or in the case of one Toyota which was a young repaired insurance write-off, so at lower cost than normal for the ages.

The Toyotas are the first we’ve have had, and we are very impressed with reliability and hence cost of ownership. The Audi is a bit uncertain as we’ve only had it a short time and unusually was bought very old, but we had a couple Audis before which were very reliable with faults rare. Experience with a Saab was similar. Compared to friends’ experiences with British cars ours have been far more reliable, and whilst the cost of repairs may be higher, they need them less often.

I have no experience of BMW as I don’t like rear wheel drive and I don’t want to be associated with the snobbishness that often seems to be associated with ownership. Other than the above named brands the only other brand I’ve had was Citroen, having a CX for a few years back in the early 1990s. It was a nice car other than over-soft seats, but not infrequent problems and expensive to maintain so only kept for a couple of years.

Those labour rates are about right for an independent. I’ve been in the trade for over 30 years both at independents and now a main dealer. Vauxhall are now £150 an hour. The most concerning thing I’m seeing is the lack of good technicians now. The industry has undervalued its mechanics for years and a lot are leaving for other better paid jobs. The average salary is 22k to 24k a year. With the lack of skilled technicians the salaries are slowly creeping up so labour rates are going to increase more especially for independents. EV car technicians are basically electricians are want a lot more money to work on something that basically kill you if you get something wrong.
The younger techs just out of college can hardly hold a screwdriver let alone be left to service a car without supervision and they all expect 30k a year.
Luckily at 54 I’ve probably got another six or seven years before my knees and back completely give out and I can go and work for a supermarket for the same pay and not have to spend a fortune on tools

You missed off tyres and suspension components.

The younger techs just out of college can hardly hold a screwdriver let alone be left to service a car without supervision and they all expect 30k a year.

My mate is a service manager in his late 50s and his technicians seem limited in what they can do because of a lack of fundamentals of how a car works. A customer ( who has new car ) ask if they could service his classic MGB…this turned out to be entertaining to say the least.

Starting to hear the ‘I’ve got an ev and there’s basically nothing to service or go wrong’ claims more often nowadays. They obviously don’t realise that the only difference is the engine system components. The engine is usually the most reliable part of a car anyway and its everything else that slowly fails.

The problem with buying a cheaper brand like Vauxhall is that their cars and parts don’t last as long as a more premium brand like BMW, VW, Mercedes, Audi, etc… (amazing how they’re all German) and in all areas they don’t perform like the above.

Not strictly true anymore. BMW are using Renault engines.
PSA (Peugeot) engine’s are fitted to Vauxhall Ford Peugeot and numerous other manufacturers. The quality of new cars has gone downhill over the last few years.

Definitely true. I get all the old cars for service and MOTs.
Mention points and condenser to anyone under fifty and they will look like your speaking a different language

I’m afraid that as long-time German brand owners covering all brands mentioned, that’s not been my family’s experience over the last 10 years or so. It used to be our experience, not any longer.