Back in 2017 when I “accidentally” bought my DBLs I was told that the Midrange drivers and Tweeters had been replaced. The Mids looked good as new, the tweeters less so. Also one of the tweeter plates was sad, much bent, re-straightened, and cosmetically adjusted with some sort of black marker. Despite all this they worked.

Biggest issue was the disintegrating bass drivers and I documented their restoration on the “old” forum. 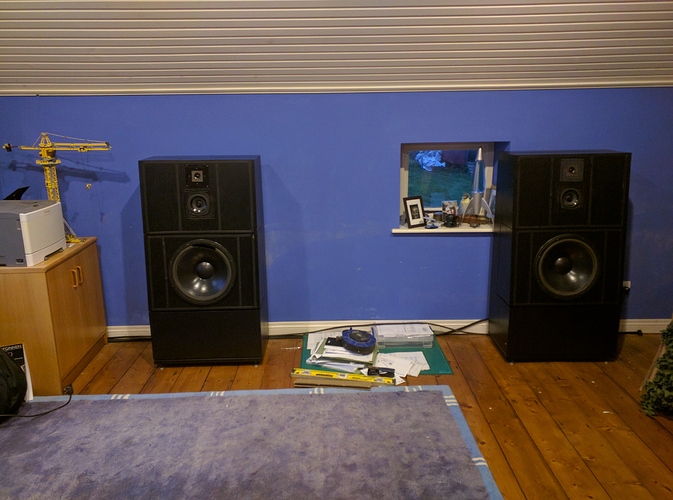 I knew the tweeters were available (still manufactured by Scanspeak) so I was reasonably sanguine about those.

The tweeter plates I was starting to consider having remanufactured. There’s a small local engineering company that’s made a few bits for me in the past and they have the capability to CNC punch them out of anodised aluminium. Part of the appeal of this approach is that it opened up the possibility of different colours for the tweeter plates. No need to go with “Model T black”, maybe blue to match the wall behind the DBLs, or a bright yellow to contrast with it! Anyhow I managed to purchase a second hand NBL tweeter and plate assembly on eBay from Canada so the need never arose.

Roll on a couple of years and I was beginning to suspect that all was now not well at the top end. Reckon from towards the end of last year the HF started to decline. Less extension, less oomph and even issues further down the audio spectrum. Some notes wouldn’t stop on time. Upgrades of a Radikal and then Karousel brought improvements (Karousel in particular – if you haven’t got one yet then go get one) but reinforced the impression that I wasn’t getting all that I should out of the system. Since all servicing was fully up to date I concluded that the tweeters were the most likely culprit.

At this point in time I believed that matched tweeters were no longer available from Naim (though someone posted that they since got a pair for SL2s) so I ordered a pair from willy’s hifi. Expected two tweeters and was pleasantly surprised that when they arrived they were a matched pair. 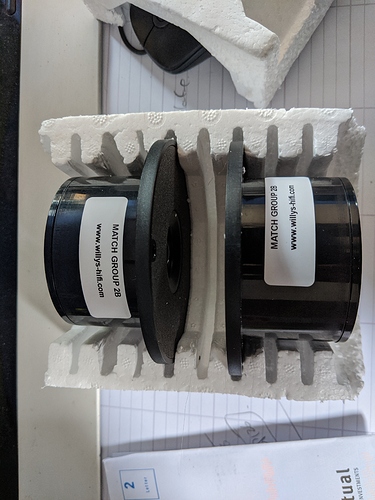 In early July I somehow found a free slot in the hectic schedule of furlough and got stuck in with dismantling my eBay tweeter assembly for its spring plate. 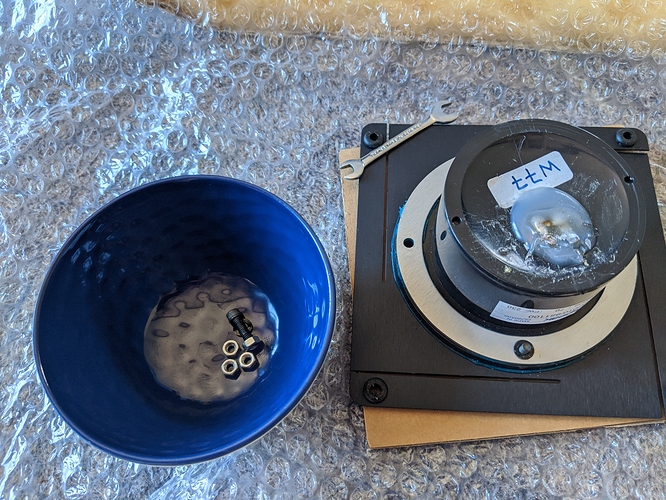 The assembly comprises the tweeter sandwiched between the spring plate and a rear alloy support ring, all secured by four bolts, washers and nuts. Additionally there’s a small bead of Hylomar Blue between the tweeter and spring plate. This can easily be removed with a soft plastic scraper. 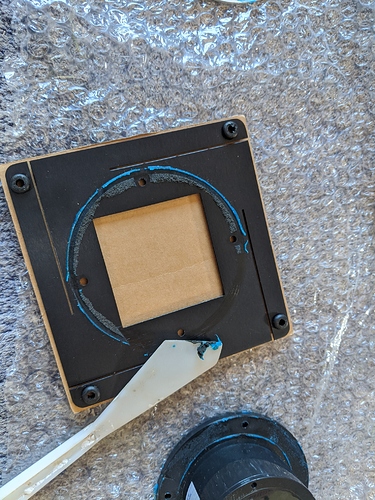 Could now see the difference between my Frankenstien tweeter spring plate and the near mint eBay one. 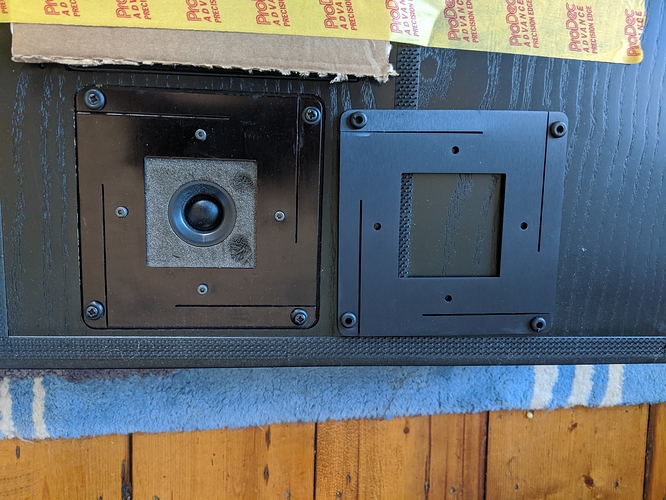 Next was the disassembly of the in-service tweeters. The first one out was clearly second hand. 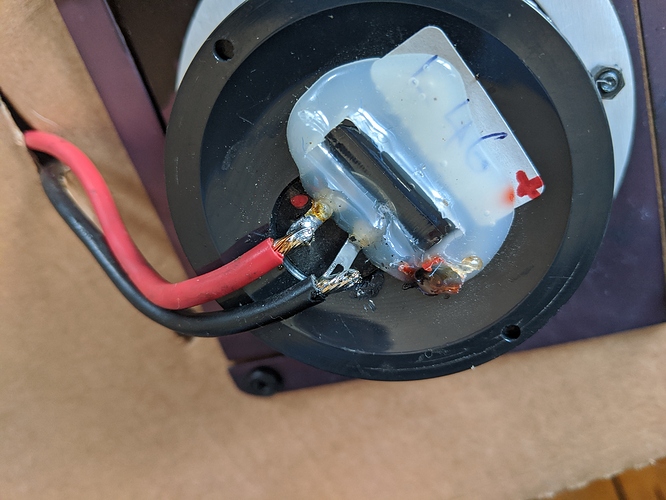 Looks like it had a damping weight attached in a life prior to being repurposed for DBL use. Also the soldering was, interesting. Additionally, it was missing its washers. The grommets had been torqued down “Linn tight”. The tweeter to spring plate whilst not being quite “Linn tight” was clearly more than the mandated 0.8Nm.

The second tweeter was little better. At least it had been soldered properly, however it was missing it’s rear reinforcing ring! Torqued to same excessive level as the first one. 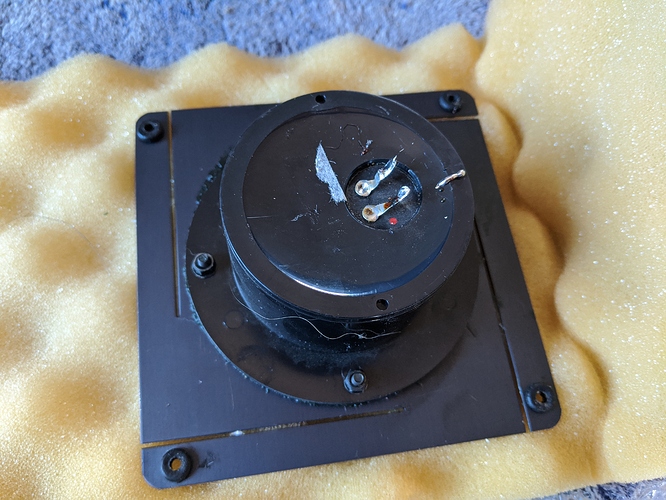 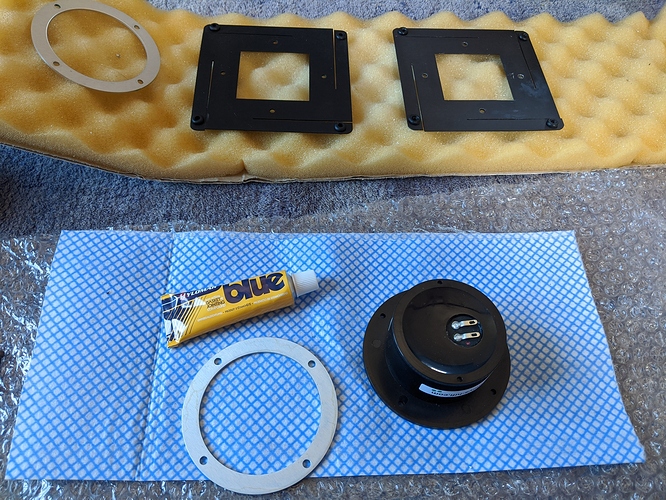 Finally, here we have the finished articles. There is a slight difference in colour between the two plates, much exaggerated by the fall of the light in this photo, but given the distance between the speakers I doubly it would be noticeable and anyway I use the grills so it’s immaterial (unless I really wanted to get some bling ones made). 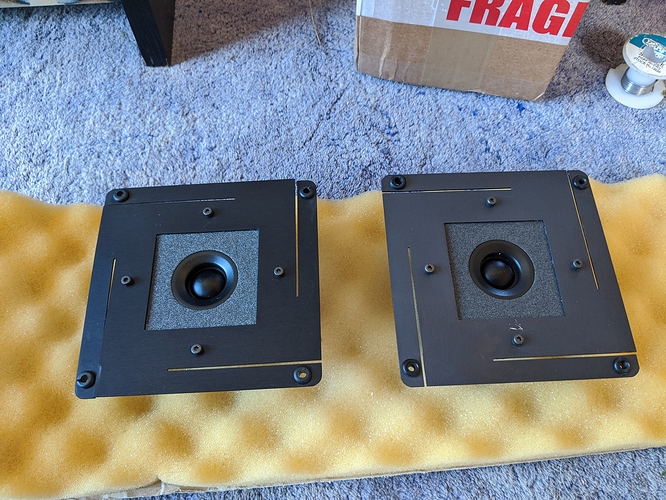 Had intended to replace the grommets as I had some I reckoned were of the correct size, however when I went to get them they weren’t were they were supposed to be. Bugger. Reassembled with the old ones which still have plenty of spring in them, despite their previous over-torqueing. It will be easy enough to change the grommets at a later date. (About an hour after I’d finished reassembly I remembered where they were. Ironically they were in a drawer in my office, approximately 1 metre from where I had been working on the tweeter assembly rebuild).

The $64k question, how do they sound? From the off it was clear that there was greater extension, more of the upper frequencies getting through. That said the burn in process has been slower than I’d expected. It’s been a roller coaster ride, good days and bad ones but with a gradual improvement over time. There’s been an ongoing harshness especially noticeable in the vocal range (maybe just here I’m more sensitive to it). On Album’s like Varttina’s first one where there are massed female vocals it’s been at times very “fingernails on a blackboard” but with each passing day there was a gradual improvement where more of the individual vocalists could be distinguished.

At 7 ½ weeks in, last Thursday, over the space of about 90 minutes there was a dramatic change and finally the vocals, and indeed everything else, came on song. Haven’t looked back since then and the system continues to improve on a daily basis.

Thanks for sharing. This is really useful stuff for us DBL owners. I may be lucky as I have a pair that were close to the last made, so no major issues with SQ yet - touch wood! However, there will come a point when they will need a rebuild. I only hope the forum can keep the tips coming as they are invaluable!

I wish someone would experiment or suggest an alternative midrange unit as that’s the one worrying me! There must be something out there that is a close substitute?

As ever Willy, great story, pics and a good ending.

Thanks Willy for the detailed update on your experience with tweeter replacement.
So the ones you got from Willys Hifi are identical to the original Scan speak tweeters ?
Did you replace the foaming inside the cabinets as well already or still something on the to do list?
I assume the picture of the dbls is before the refurbishing of the bass units.

You may check out TomTom for new grills. I got mine last year and they are really impeccable.
I’ll get into replacing my tweeters soon so your experience is most valuable for me too.
Remains as brought up several times here now a reliable way to deal with the mid range drivers

Charlie, The tweeters from willys are the exact model originally installed in the DBLs. As I said they do some matching of pairs, though possibly not to the same degree that Naim did. Still it’s better than nothing.

Haven’t replaced the foam in the DBLs yet. That’s more of a winter project, still too many loose ends to tie up in the garden.

Yep, picture is of DBLs before I had the bass drivers done.

My DBLs came with a brand new set of USA sourced grills. Different from the OEM ones that TomTom is supplying, a stiffer foam with a painted black finish, but they’ll do me for now.