Recently we had some damage to the ceiling in the office / music room and part of it is currently removed - it’s directly below the mains box feed into the office, so there might be an option to run a direct feed into the room. Does anyone have experience of how this would work in a NZ set up?

Currently the room has a regular domestic direct feed via a 63A RCD and a C20 circuit breaker (it is the one labeled office / bathroom - the bathroom is a single power point that is not often used and the rest are all the 12 wall sockets in the office on a single spur off the RCD): 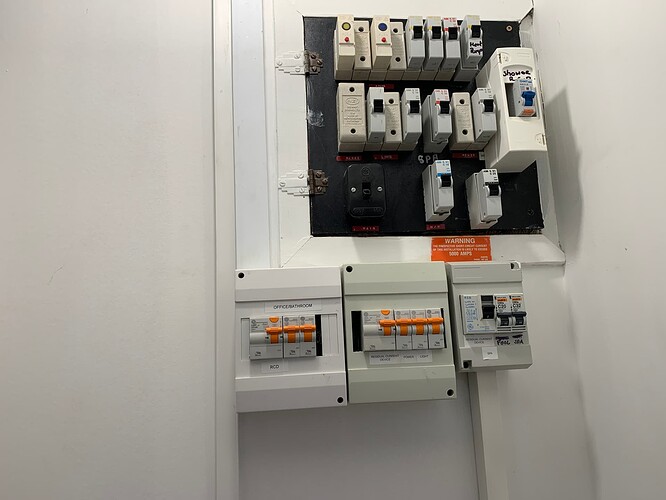 It passes through the floor to the ceiling of the music room (highlighted in red): 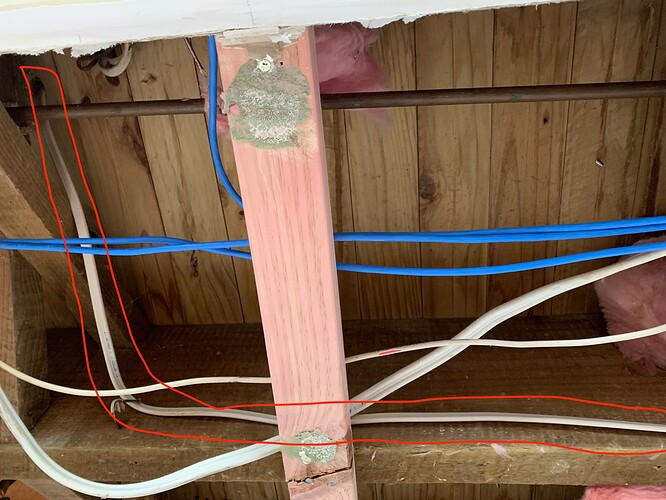 But… it’s at the opposite end of the room to the system! 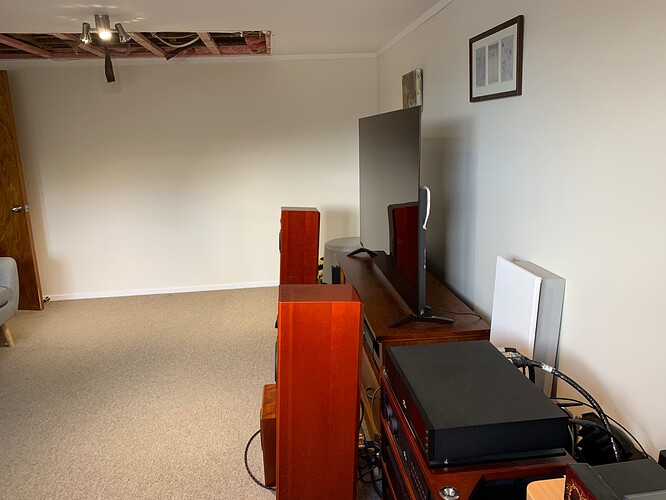 I might be able to get a direct feed to the corner at the other end of the wall, which could be anywhere between 2 and 4m from my Isotek power-board depending on what route is available. It is a false wall, so there is a gap between the plasterboard and block wall behind.

My current thoughts are a single feed (10 or 6 square mm) to a single un-switched wall socket from a 100A RCD with a 32A Type 6 circuit beaker. Then run a Powerline to the power-board (if I have enough length). Are there other options if the wall socket is further away from the system? Am I better to have a second feed just for the 250?

My dealer can link me to a retired electrician who used to do this who can give me a specification and there is some stuff on the Stereonet blog about NZ setups with some weird stuff about cable directionality and earthing that I don’t understand.

Is this likely to be worthwhile considering that the room is currently on a single circuit? And what options are there if the wall socket is not next to the system?

Just to add, that I don’t have any issues with audible interference from the house (NZ doesn’t use full radial mains in the house) and the Isotek power-board has a filter that has removed the background noise that I measured with a meter when I tested the board.

My dealer sent me the NZ specification for this and I’ve passed it onto the sparky. We will just run a 6mm cable from the switchboard down to the outlet/ outlets for the system. It will have a fuse unit that will have a inbuilt rcd unit just for that circuit.

He’s lined up for next week, before the ceiling is repaired.

I’ll either run a Powerline from the wall to a star-earthed distribution board (to replace the Isobek) and Powerlines from there to the 250, SC and 555PS, or if I can get the wall socket close enough, I’ll use that and stack the 3 plugs using the Tapons (piggy backs) that maintain the Naim star-earth arrangement.

I never thought I’d get a dedicated line in, until the ceiling needed repairing after the overflowing bath, so a bit of a bonus there. Hoping I hear an improvement….

Mike, don’t have a clue about all the electrical terms you are using. But I do know that since I got a dedicated spur for my 272/555/250 5 years ago it was transformed to a higher plane. A great thing to go here in little old NZ. I used an electrician recommended by Chris Murphy at Real music company in Wellington. It was well worth the $4k. You will have no regrets.

Thanks @IDAK, John at RM Auckland has linked me in with the electrician they have used in the past for Naim systems (since retired) and he’s talked me through everything to do. I’m looking forward to it.

I’d get a double socket put in rather than a single. You might not need it now, but who knows in the future?

Thanks. The un-switched wall plugs are only available as doubles here apparently, but the dealers ex-electrician said to wire only one side (he runs a full 500 system using that set up here in NZ). I do have lots of other plugs in the room for the office computers, TV etc.

Could you not run 2 cables……only one go at installing?

Kia Ora Mike,
When we built our current house 4 years ago, I installed to 10mm hifi circuits into the listening room. One for the Naim gear and the other for the computer based smps equipment. I went with 10mm cables.

The nz spec states 6mm, many on the forum have had positive experiences upgrading from 6mm to 10mm. I went with 10mm and the system sounds great.

Could you not run 2 cables……only one go at installing?

Well, yes, but we have this unusual Kiwi thing where we can piggy back plugs. This gives you the ability to have a direct feed into the system without switches, connectors or power boards. For a Naim system you just piggy back power amp/pre-amp/source.

I’ll discuss with the sparky running a spare cable and leave it unconnected at the mains box and the wall plug though as a future proof.

The nz spec states 6mm, many on the forum have had positive experiences upgrading from 6mm to 10mm. I went with 10mm and the system sounds great.

I think that might depend on the length of the run though? This will be quite short, about 8m.

Sorry, but I only have UK electrical experience, but I would say double unswitched socket, especially if you go 10mm (which is better). The main reason is that you have more space behind to connect the cable. Also go for a deeper back box again for the same reason. You could then put the 250 in the spare socket

Not quite sure what a “Type 6” is, but you will be looking for the one that has a slower break, due to the big Naim transformers. In the UK we call this the C Curve, whereas the default for normal UK circuits is the B Curve

Thanks, yes I meant a Type C circuit breaker. The wall has a cavity between the dry wall and the block wall, so the depth of the sockets should be okay.

I’m thinking two wires plugs may be better, as I’ve also got a sub, bluray player and headphone PS on the system.

Keep us informed as I am looking at running a dedicated line for my main system in our new build (well that’s the plan).

Kia Ora Mike,
Yes there is the volt drop issue, but also a larger cable having a larger earth.

So having the largest earth you can between the switchboard and the dedicated plug follows suit.

He says to use a 50mm or 20mm earth from the fuse box to the earthing rod if you can replace it. I don’t even know where ours is and I’ve been here over 20 years! It was about everything being incremental improvements and do what you can. For example we have to have RCDs now, which rules out a ceramic fuse even though the later is better. He also said 6mm or even 4mm would be fine for the short run I have, the main point being to have a single run and a single plug using the Tapons back to back to have a direct link into the Naim boxes and have a single earth path.

The guy I spoke with wrote the spec for DM’s for Naim systems here in NZ, so it was great to link in with. He’s retired, so just giving the advice, my go to Joe 90 is doing the work. Hopefully we’ll get it right.

Hi Mike, looks like you’ve pretty much got it all covered.
The most important thing I found was to bypass the main board completely with the + and - wires and earth, running them off a separate small box that is not taken from a spare way on the main board.
When I did mine I had a long chat with Steve Hopkins of Naim about their recommendations, based largely on different options they had tried for the demo room at HQ. He was strongly of the opinion that it was best to use 10mm cable if at all possible, even on short runs. He also said that they had tried multiple runs to feed several sockets, and found that a single 10mm run worked best.
For my system at the time, NDX/282/200, he suggested a 32 Amp breaker. I wonder it your bigger system would be better with something a bit higher, maybe 50 Amp?

Well, I found the ground earthing rod under a deck walkway (fortunately I had screwed the deck in for access to the gully trap, so I lifted a few boards). I think I’ll ask the sparky about rewiring this on a different route, as replacing the cable doesn’t look like an option as it passes through the asbestos cladding to behind the wall in the music room. A new route through the ceiling and under the house might be an option. 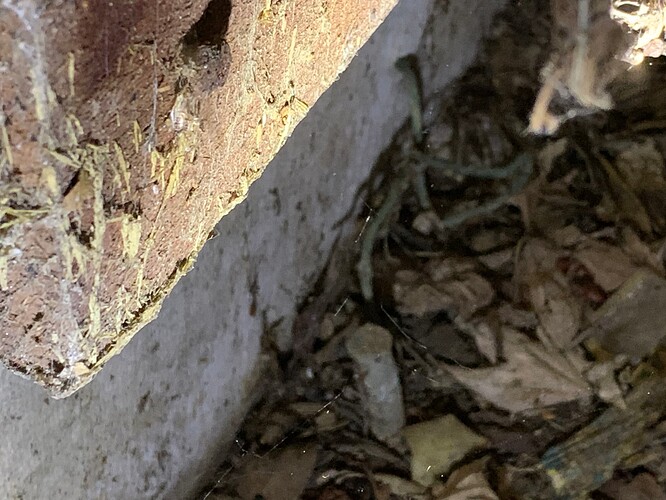 The most important thing I found was to bypass the main board completely with the + and - wires and earth, running them off a separate small box that is not taken from a spare way on the main board.

Thanks Chris. I’ll ask the spark about that. I have a suspicion that it’s not straight forward under the NZ regulations. The specification I have is to have the spur so it’s the first fuse in the buss or connected directly to the Main on off switch - but off course will have to see what that looks like pragmatically we we open top the mains box…

If you can, split the supply from the on/off switch, or any point before it it enters the main board.
Having tried both, I found that taking the dedicated circuit from a spare slot on the main board was more or less a waste of time, and it was only when I moved the connection (and earth) to bypass it completely that the real benefits became apparent.