Well there’s a coincidence - I was thinking of signing up now that I might have some time to watch a few concerts (only managed one during a previous trial).

Not sure if this is any different to the standard trial, but I think my email suggested trial extension for the same account.

I watched Rattle conducting Mahler 2 - thoroughly more enjoyable than his BSO outing which I found rather boring compared to the Solti CSO version I came to adore in the 80’s.

Great resource, as many of these things are so long as you have time - now many will unintentionally.

I’ve signed for the free one month access. It’s well worth doing, there are lots of quality concerts, some interesting films as well. Production standards are very high and professionally done. Last night I listened to the New Year’s Eve concert with Kirill Petrenko and Diana Damrau. A real tonic and truly uplifting in these difficult times - recommended.

Further to my previous post, last night I listened to Dvorak Symphony no.8 conducted by Manfred Honeck - a truly magnificent performance. Conducted without a score as well. Honeck’s conducting style reminds me of Carlos Kleiber (IMHO praise indeed!).

Thanks for the recommendation.

Watched this the other day, and seeing her playing was fascinating as I’ve never seen her live before - incredibly animated performance - I thought she was going to get her bow stuck in her hair on a few occasions 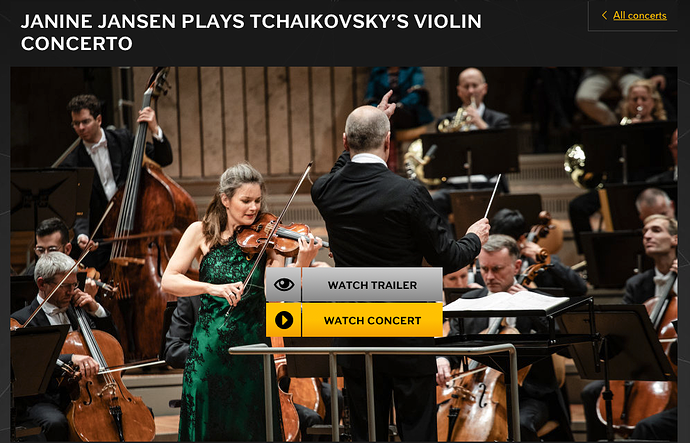 As posted in another thread:

New York Met is streaming an opera a day during the lockdown, entirely free. (Donations invited). No idea of quality. This link includes the programme for the coming week:

Edit: I did say it didn’t include subtitles, but I had simply missed where to switch on - English subtitles are there.

Thanks - hadn’t seen that!

Nice - should be able to watch on AppleTV!

During this extraordinary and difficult time, the Met hopes to brighten the lives of our audience members even while our stage is dark. Each day, a different encore presentation from the company’s Live in HD series is being made available for free streaming on the Met website, with each performance available for a period of 23 hours, from 7:30 p.m. EDT until 6:30 p.m. the following day. The schedule will include outstanding complete performances from the past 14 years of cinema transmissions, starring all of opera’s greatest singers.

The streams are also available through the Met Opera on Demand apps for Apple, Amazon, and Roku devices and Samsung Smart TV. To access them without logging in, click “Browse and Preview” in the apps for connected TV, and “Explore the App” on tablets and mobile devices.

I plan to try on the home cinema screen (12ft wide). Sound system isn’t hifi. So not sure what will be like - absolutely fine for movies, but this could be a challenge for it. I may have to try rigging the main speakers’ feed to the hi fi, alternatively try simply connecting as a stereo feed to the hifi…

I should probably grab my projector from the other room, hook it to the AppleTV, project between the SBLs off a table and Airplay the audio - I’ve been doing Audio Airplay with Digital Concert Hall and it sounds fantastic. Opera might provide a slight lip-sync challenge though that’s not noticeable when there are no vocals.

That’s what subtitles are for - to take your eyes off the lips!

Well, Having discovered the subtitles I had a go on the large screen, catching Bizet’s Les Pêcheurs de Perles before the daily programme change, An opera with which I was completely unfamiliar, not even knowing the music. And not bad at all - sound quality needs improving, so I will have to route through the hifi, and the frequent close-ups and some of the special effects detracted a bit from being a supposedly live recording, but a very good way indeed to experience a new opera, especially at zero cost! Infinitely better than streaming a purely audio recording.

I will certainly follow through with others in their daily series.