After much deliberation and reading of reviews and such like I took the plunge and bought myself a
Mu-So 2.
On installation it sounds awful, looks great but sounds awful, you can imagine my disappointment, in fact I would say that my Amazon Alexa sounds better ( and £1200 cheaper).
I’ve tried moving it around but to no avail. It sits on top of a 40mm thick oak sideboard and is 25cm from the wall. I’ve tried the loudness on and off as well as the room compensation but neither if these seem to make the sound better!!
The sound is very compressed with not a lot of bass or treble, I would compare the sound to not much better than Dixons Matsui music centre.
I currently play music through my sound bar which to me sounds quite good but wanted something a bit more upmarket and the Mu-So seemed to fit the bill.
I hope it’s just a case of me doing something wrong so any help would be greatly appreciated.
Thanks I’m advance 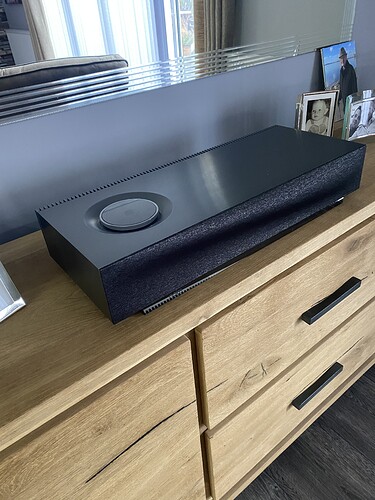 I don’t know the product, but I would suggest it will need a run-in time. Try leaving it switched on all the time, and playing permanently, then just turn volume down when need be. The Naim Classic range needs up to a month to run-in

Mine was incredible out the box, its in a big apartment and all, even those that don’t know Naim, were flabbergasted at the sound quality. I hope you get this sorted.

That doesn’t sound right to me. What music sources are you using?

I have a QB2 and found using audio serenity gel pucks under each corner brought things to life…cheap on amazon.

Crap, it should sound the Billy hillocks from the box.
Its faulty, but yes, would like to know what source you are using? Tidal, Qobuz etc.

My Mk1 was a straightforward plonk and play box. So much so that it was quickly joined by more.

A little while back I bought a new Mk2 and was disappointed. Shrill, gutless and boxed in.

Not any more. I think it took about 2 months. It now sounds wonderful. Difficult to believe such bandwidth and musical communication can come from such a modest looking source.

You may have bought a duffer. It may have a sound balance which just doesn’t suit you and never will. But give it some time. I have been where you are now. If mine still sounded as bad as it did out of the box, I would no longer have it.

Well there’s nothing I can do at the moment as everywhere is closed due to COVID-19!! I have 30 days return policy from when the store reopens so that will give me 6 weeks with it. I’ll see how it is then!!

As others have asked “what source are you using?”

Muso gets better with upgrade in source. Worth a free trial of Tidal or Qobuz?

I do find this " give it time" absolute ridiculous. This is an expensive bit of kit and should sound great from switch on.
Yes I agree…it may “improve” over time but Naim wouldn’t produce something that sounds naff out the box.Imagine the returns they would get.
Spotify us far from ideal but even that should give a sound better than a bloody Alexa.

@Aristellier That is very disappointing and surprising. I’ve had my Muso-2 for 18 months now and it sounds wonderful. I suspect it has something to with room acoustics. Did you try the room compensation settings in the Naim app? Have you tried a source other than Spotify?

I do find this " give it time" absolute ridiculous. This is an expensive bit of kit and should sound great from switch on.
Yes I agree…it may “improve” over time but Naim wouldn’t produce something that sounds naff out the box.Imagine the returns they would get.
Spotify us far from ideal but even that should give a sound better than a bloody Alexa.

I agree with the above… i think it can only boil down to:

Spotify, airplay and the internet radio, all sounds poor!!

I wouldn’t disagree here. If Spotify was free I still would not use it.

A wired connection is much better with Tidal or Qobuz.

Let it run in for a few days. Optimise it for position in the App and after that, if it still sounds like you describe then it would seem there’s a problem with it. Then I would suggest you contact your dealer.

My Mk 1 was good out of the box, I would be surprised if was just a personal taste thing. Given cost if not happy I would take it back and get a replacement.

If Spotify was free

Spotify is free (or rather it offers a free option!)

But even free Spotify sounds surprisingly decent given its lossy compression. However I don’t think Muso1 is hifi - to me is a boombox, but a surprisingly good sounding one, based on hearing once in a shop, and if it had been a third of the price I’d have bought it for my wife to use for background music instead of the radio.

There may be something wrong with it - or it may be that you simply don’t like its sound. What had you heard or listened to before, providing your baseline as to what you might expect?

My Mk 1 was good out of the box, I would be surprised if was just a personal taste thing.

When my girlfriend got a Mu-So QB gen-2 and i heard it for the first time, my first feeling was ‘this doesn’t sound right’, which was a strange sensation to have. Then after listening to it for about 30 minutes the sound suddenly started to make sense in my brain, and then it sounded really good. It’s difficult to describe what happened, but i remember that when i first heard it, my brain was expecting it to sound like other small speakers, and it didn’t sound like that at all. When my brain adapted itself to that, i realised how rich and detailed it really sounded, and i was really impressed.

It’s not free on a Naim streamer though unless you Bluetooth it.