Does anyone know what speaker this is?

Following the thread on ‘childhood systems’, I came across some photos of one of my early HiFi systems, however cannot for the life of me remember the make and model of the standmount speakers (bought new in the 1970s from a now disappeared HiFi shop in Widmore Road, Bromley, Kent), and wondered if anyone on the forum knows anything about them; 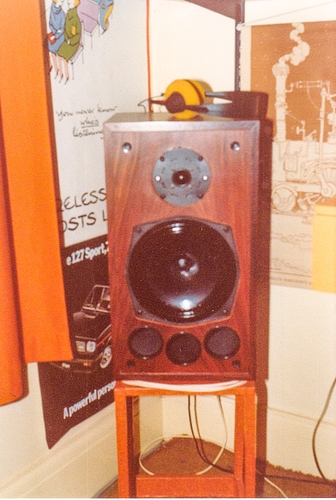 The Sennheiser 414 headphones on top help to give some sense of size/scale, and with the bextrene(?) cone and triple front ports. I recall they did sound quite good, even though speaker stands were homemade out out offcuts of old plywood covered with orange Fablon (mmmmm…nice!)!

Any help jogging my memory appreciated.

Are the small recesses in the corners for plugging in a grill, like these? 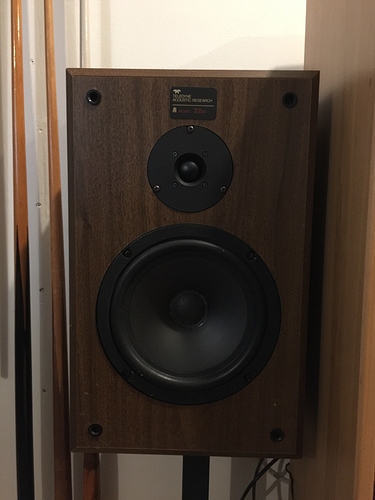 Are the small recesses in the corners for plugging in a grill, like these?

Yes they are Mike (@Mike_S) . The covers (not shown) were fabric stretched over a wooden frame that had plastic pegs fitted that inserted into the plastic plugs in the corner.

I see you attached a photo of AR22BX speakers - a later system of mine had AR18BX speakers (in black ash) that I kept for 7 years, but for some reason I just can’t identify/ remember the make or model details of these triple ported speakers.

Perhaps Richard has the night off

Those are my headphones though.

I did wonder if they were some vintage Celef speakers. The bass unit looks familiar and the ports look like the have some cellular material in them (drinking straws). I don’t remember any 3 ported models though…

Yes, I sort of wondered that. I had some Domestic II Supers which had a very similar or identical tweeter. But the woofers here look very KEFfy.

Many thanks @Christopher_M - yes, @Richard.Dane is a fantastically knowledgable audio historian, however maybe these were a small run by a small company and therefore not known? Certainly folks at my local dealers in Lewisham couldn’t place them. Hoping that given the size of the forum that maybe someone else had the same speakers and can ID them.

Thanks also @james_n - the pits were black cardboard tubes, however didn’t have any inserts like straw or foam in them.

Interesting that you believe the may contain a KEF driver - guessing KEF made Bextrene cones in the 70s?

Another clue is that the tweeter is held in place by 4 screws - many speakers of this era appear to use 3 only.

The Tweeters seem to be Seas H211 used by Mission and Boston Acoustics in their speakers during the late 70’s early 80’s.

Well, I had wondered AR, but if you had some later on, you would probally remember.

Unfortunately I have no idea. The three ports at the bottom are fairly distinctive , but this one has me stumped.

Many thanks Mike, Tony and Richard - appreciate you thinking about this and getting back on this.

The Celef angle is interesting - yes, I see the similarities, and who knows, maybe they did make some 3 ported speakers at one point…I have a serious memory gap around these speakers, and Celef rings no bells. Interesting that the name Celef apparently is a combination of ‘Celestion’ and ‘KEF’, and came about as the speakers used drivers from the two companies.

Thanks again guys - guess the mystery will go on unsolved.

You could email the pic to Stewart Tyler of Proac, founder of Celef…

I guess a Celef is a possibility - certainly they used that combination of drivers (Seas tweeter and B200 mid/bass), but I can’t recall seeing one with three ports.

The Celef idea came as they reminded me (ports aside) of the Celef Mini professional (albeit smaller and with two additional ports). I’ll be interested in what you find. 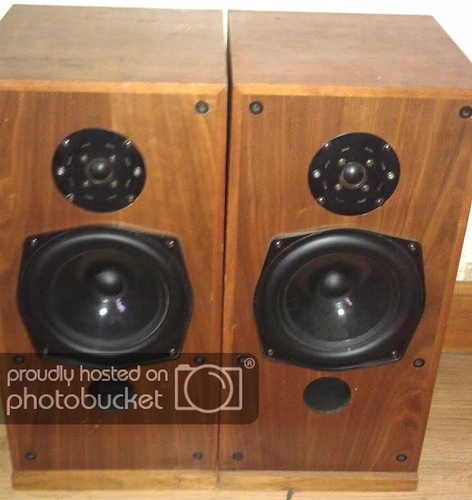 Good idea on contacting Proac - I’ll feed back if/when I hear back from them.

Huge thanks again to you all.

You could always try asking over at pfm. They have a “Classic” room.

Hi @Christopher_M, I have used Proac’s ‘quirky’ on-line e-mail contact form (which requires Adobe Flash to work, so couldn’t do it from my iPad!). No matter how hard I ‘googled’, I could not found a direct e-mail address for Proac - very strange! Still here’s hoping the form gets to Proac and it elicits a response - I’ll let you know if I hear back from them.

Many thanks. ATB. George.