Dragon in the house

Finally found a lovely example of this fine machine.
Freshly serviced and calibrated up.
Very happy playing my old cassettes once again as its been over 30 years. 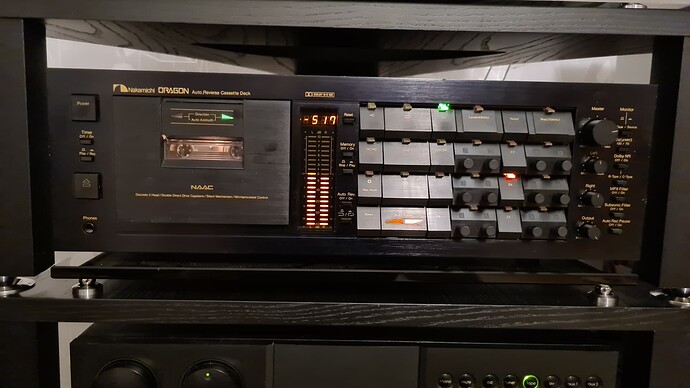 Very well actually and far better than i would have said it was going to do.
Been complaining hires tracks played from the melco and recorded on tdk sa tape, and switching between source and tape, the difference isn’t that great, no dolby, so obviously some tape hiss on the quite sections, and the top end slightly a bit less, but overall very good, far better than i was expecting it to be, dynamic ect, and just has that lovely analogue sound thats hard to say why we like so much.

But just using the dragon is an experience in itself, celebrating the tape before you start recording etc, its just so different to todays digital interaction of just push a screen on your tablet and off it plays, etc

I have wanted a tape machine for some time, was looking at going reel to reel, with a revox pr99, but room and tape costs, kind off ruled it out.
So when i found my old cassettes from 30 years plus ago, i decided that maybe a cassette deck might be a better option, so after looking at a few, i finally stubbled on this one, as said freshly serviced, etc, so in good health and even had a second dragon in my system today to compare against, just make sure it was in the good health it was ment to be in and pleased to say it was, but the most important thing is the heads look in great condition and no real sign of wear, as a poorly dragon head means you have a very expensive paper weight, or as i like to say expensive door stop, as replacement heads are not available

@Dunc so the Dragon vs Melco N10 into your Dac is not that far behind in terms of musical enjoyment? I suspect (although maybe wrong) that the resolution of the digital front end is far greater though. Thats very interesting for sure as more music is available on Tape again and like with vinyl I have stuff on cassette that is unavailable on Stream/Vinyl/Purchase Download. Food for thought as always but rack space is always at a premium with Naim boxes.

Steve
What i was trying to say was
Play a stored track from my melco to my rossini dac, this then to the 552 from that to the dragon.
Then record the track and at the same time switch between the source and the recording on the dragon, as its 3 heads you can listen to what you have just recorded a second before.
Compare these together the difference is noticeable but its not miles away and better than i was expecting.
It just shows that feed a good cassette deck like the dragon with a good source and it can even today hold its head up high

I have a refurbished Nak DR1 in my Naim system and it sounds fab. My old Maxell and TDK tapes were well recorded and do not disappoint. The Dragon is the ultimate Nak but is very complex and expensive to repair.

I have a Dragon, which is currently in dock for a playback issue. Lovely machine, but not without potentially expensive issues manifesting themselves in time (as I have found out).

My ReVox B215 (which needs a service) is likely to be more reliable long term.

But which one can I get next? Quite fancy a Tandberg…

The dragon is complex inside and hard to work on, but apart from the main head, it can be fixed, motors can get re wound, plastic bits, 3d printed, etc. But if the head is worn out then its pretty much game over for it.
Luckily for me i have a mate just down the road that fixes things like this, plus he specialises in tape machines, be it reel to reel or cassette, but he did say the naks are all hard to work on, especially the dragon compared to other machines

Three of my favourite relatively affordable “non-Nak” decks are the Aiwa AD-F770, the Denon DR-M44HX, and the Sony TC-K81. None are prohibitively expensive and all are capable of making superb recordings when running well and properly set up. Of the three, I guess I would find it hardest choosing between the Aiwa and the Sony. Despite them being introduced within a year or two one each other, they so very different. The Sony is like a top flight deck from an earlier generation, and offers manual control of things like bias and sensitivity adjustment along with onboard test tones and meters, whereas the Aiwa was way ahead of its time with real time counters, automatic tape tuning, automatic head demagnetising etc…, and could have remained on sale and still looked fresh right up into the '90s (indeed, the Aiwa lived a long time in the Aiwa catalogue, with late ones gaining a revised black look).

I was going to add the Pioneer CT-A9 to this list to make a fourth option, but values have shot up recently. So much so that I sold mine on a couple of years back. It’s a very very good machine but doesn’t eclipse a top Nak. One other I would add to this list is the Hitachi D-2200M. Unfortunately my own mint example has expired with melted belts and hasn’t been used in many years. Probably time to get that seen to…

For money no object, a Tandberg 3014 or 3004 would definitely be interesting. I did once turn down a Tandberg 3004 that I was offered. It was such a great looking deck, and it was at the right money, but a ZX-9 came up that I couldn’t pass by so I went that way instead. I had no regrets there as, cool though the Tandberg was, the ZX-9 was ultimately an appreciably better deck. However, there’s another deck that I really wanted (up there with my ZX-9 and 582) and remained elusive to me, and that was an Alpine AL-85 or AL-90. They are definitely something to keep an eye out for.

Anyway, apologies to Dunc for a slight thread diversion…

This is making me want to get that old aiwa out of the loft !
Although must be 25 yrs since it was last powered up… I wonder if it will still work!

The rubber they used to make the belts tends to go gooey and sticky after a number of years. It’s quite a mess to clean up and much easier to do if you remove the entire mechanism from the case, as there’s not a great deal of room to spare. However, the top Aiwas are definitely well worth saving, especially the AD-F660 and AD-F770, which are my two favourites.

We used to have an F770. Bought it from a friend who was emigrating. Eventually the mech stopped working. It might be still in the loft, but I have a feeling that we took it to the tip.

The 770 is the deck i had when i was a teenager, still dont know to this day what happened to it as i don’t remember selling it, but it was a great deck

Making my first play list tape tonight, still can’t quite get over how good it sounds with the rossini ramming into it, plus obviously the rest off the kit, the 552 certainly helps big time with it’s nice tape outs.
I have one din to rca’s going from tape out that i made up myself with some silver coated cable and a second pair of morgana rca to din going back in, can finally use the tape button on the 552.
I certainly don’t remember tape sounding this good or infact ever heard a tape system sounding this good 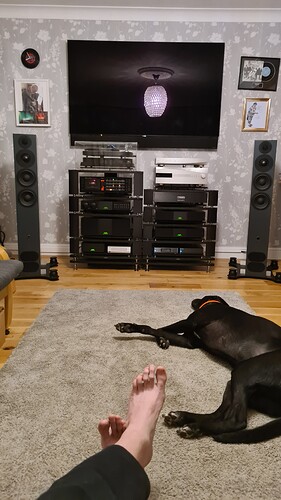 Had to pinch my shelf from my dCS, so the clock for now is once again stacked on my player, also the 552 went back down to normal height legs, due to height getting close to tv, can’t say i noticed a difference with doing these, but at the same time i was more gloating at the nak to even be bothered.
But will get another fraim shelf so i can once again unstack my dCS kit

After having some TDK SA tapes and finding them quite good at recording quality against source, i decided to try some TDK SA X these gave a slightly better result, especially top end and now getting very close to source and certainly for the money a good value tape that i will use for most recording i think.
But got 2 maxwell metal tapes this week and trying them on the dragon is simply stunning, no dolby and the difference between tape and source is very hard to tell, plus you can really push the recording volume on this tape and its happy going into +6 without any noticeable distortion, whereas the SA doesn’t like anything above +2 as the distortion starts to creep in.