This is going to sound like a really basic problem but it’s driving me spare.

Just bought the 2006 SACD+DVD set of Depeche Mode’s Violator. The SACD plays great and is every bit as good as the reviews. The DVD on the other hand…

Tried it in the Sony UBP-X800 that played the SACD perfectly and got this: 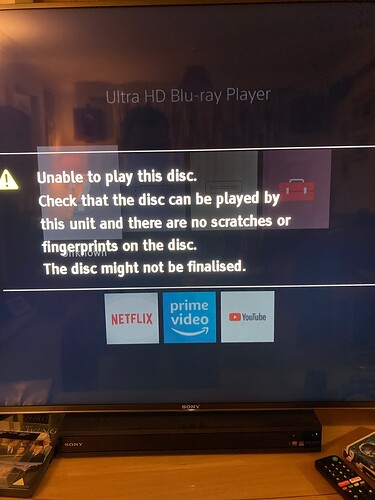 image1920×2560 252 KB
The disc has the usual DVD symbol so it should be playable. Finalising obviously can’t be an issue on a bought DVD-ROM disc. The disc was immaculately clean, as-new, but I cleaned it with Reveel until squeaky clean and got the same message. Checked the player’s software is up to date, power-cycled it… no change.

Tried it in our very old Sony HDD/DVD player: ‘Cannot play this disc’.

Tried it our previous Blu-ray player (Sony) and got the same message as in the above picture.

Then… played on our first (Panasonic) Blu-ray player and it played perfectly. What the Dickens is going on?

The internet seems to have no record of this disc being problematic. Go on, what have I missed and how can I solve it?

Not overly familiar with regions but could it be an issue?
Perhaps your first player was Region free.

Good thought, but the old HDD player is multiregion because I still have to use it for a couple of R1 discs I’ve got.

Plus, the DM DVD (like many music-focussed discs) has that slightly odd German legal notice that states it’s region-free.

Have you tried to clean the dvd disc ? We never know, sometimes it works. At least what I remember when I had DVD in the past.

As I said in my initial post, I cleaned it with Reveel just to be on the safe side but it made no difference.

Have to say, I’m slightly gratified that no-one else can think of anything! Doesn’t solve my problem though…

Have read too quickly….Hope someone else will be able to help you.