Infidels was the first Dylan album I bought upon release and I first saw him live in Slane Castle in 1984 so this 80-85 Bootleg series offering is very much part of my late teens. 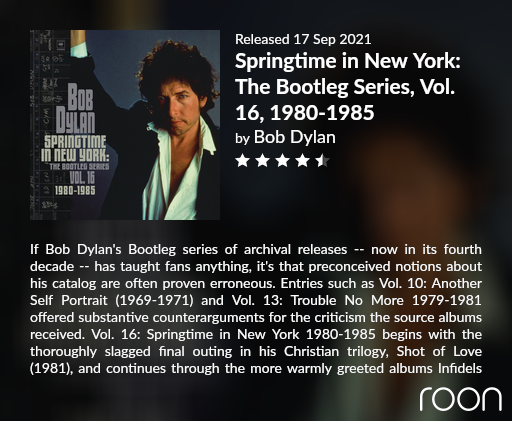 But it’s so much more than that. The first CD of rehearsals with covers of songs as diverse as Fever, Sweet Caroline and this night won’t last forever is worth the price of admission alone.

The Shot of Love outtakes are excellent enough to necessitate review this late gospel period.

The Infidels outtakes are extraordinary. It could have made a great double album with some tracks not sounding out of place on BOTT.

Empire Burlesque has been rescued from its contemporary 80s sheen and its songs allowed proclaim their worth. The outtake of New Danville Girl is so much better than its eventual release as Brownsville Girl.

If you’re prevaricating, buy it.

On my list to listen to on Qobuz. I wonder if there will ever be anyone else in musical history whose bootleg series could constitute an entire alternate version of their career with arguably the same level of excellence throughout.

Need to get this, thanks for reminder.