Equipment location in the family room

Recently I’ve been playing with splitting my single Fraim stack into brains/brawn with a bit of success (still waiting for the 2nd base to turn up). Only problem now is that obviously the real estate has increased and the impact into the family space is a bit too much. 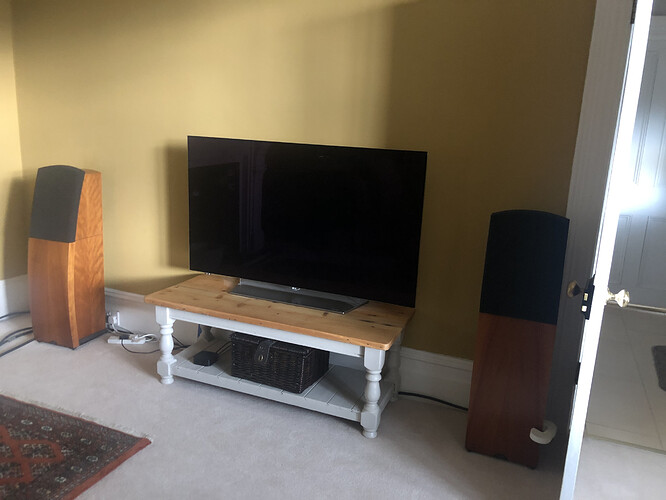 it needs to fit on the opposite wall for this to work for the family so either I stick it under the TV or squeeze the speakers together and put it to the left. Any thoughts on which is likely to sounds best? 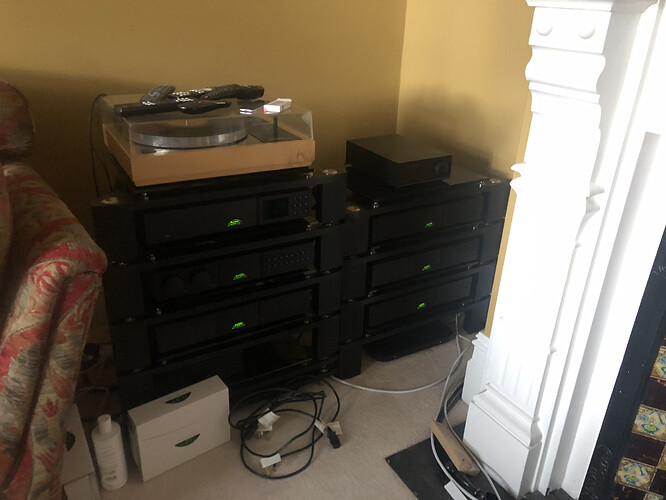 You’ve got too much in the way of nice kit to stick it under the telly. In the grand scheme of things your dual Fraim stack isn’t that imposing. Any other approach (without downsizing) would be a compromise.

thanks James. Looks like that would leave squeezing the speakers together as it does need to move from the current opposing wall to the same wall as the speakers.

Could you move the LP12 to a wall shelf and keep the single Fraim stack. I think that would be less of a compromise than squeezing it all along the wall with the speakers.

Alternatively, wall mount the TV and locate the two Fraim stacks underneath ?

Do you mean putting it on the left hand wall, at 90° to the speakers? That could possibly work but you’d never fit two fraims and both speakers and the TV on that wall. The right hand speaker already looks too close to the door for comfort.

The all black system does look somewhat monolithic. Could a double width Quadraspire SVT in bamboo work? It’s much smaller width wise. Or maybe you just have too much hifi for the size of the room. Less is sometimes more, as I found when I swapped my SL2s for small speakers last year. It’s a family room and needs to work for everyone.

Can you post a picture of the complete wall which has the two Fraim units. Also a simple schematic showing the dimensions and current lay out would help.

You could make a feature of your Naim HiFi and have the TV wall mounted above.

I have my TV to one side of it, but the hifi is a big feature of the room, two full size Fraim stacks, 10 shelves.

It dominates for sure but enables other furniture to work within the room.

Other option as has been said one stack and wall mount the turntable.

Or can it go in another room with speakers in the lounge, by drilling holes into the room for speaker cables. Others have done this.

Lots of options. I wouldn’t downsize your system to something else personally. Work with what you have and come up with a solution.

You could put all the Naim hifi in a cabinet and have the turntable on top and the TV wall mounted which is something I have done before and would consider doing again but having a cabinet built around the Fraim to conceal it.

Thanks everyone, really insightful thoughts. I think under the TV with a cabinet around might work. Just need to figure out the Turntable. Will head over to Pinterest to see what others have done.

You can keep it on the Fraim, but build a cabinet around it and place turntable on top. Just need two sides, a top and two doors. A framework to support the base and rear. Will need a carpenter or handyman to build it for you unless you are handy yourself.

That way you get benefits of the Fraim and it is all neat and tidied away!

Am considering doing the same at some point. But as a builder the last thing I want to do is work on my own house

Get rid of the television and tell the kids this is now the music room. Problem solved and everybody is happy.

Get rid of the television and tell the kids this is now the music room. Problem solved and everybody is happy.

I got a divorce, the kids now live with their mum, I say what happens in the family room now, when they come round they can watch TV, no problems. When they lived here, I made it abundantly clear that the only buttons they could use was those on the remote control, if they damaged my HiFi chopping off of the offending hand would happen, it worked, good job they didn’t report me to social services! My dad said the same to me about his music system, some Japanese stuff from the 1970’s, when I became more interested in HiFi I persuaded my mother to buy him a proper HiFi system, we made a trip to Norman audio in Preston, started him on his HiFi trip Dual 505/Nad 3020/Bose speakers, sadly it has not got much further, although he now has some lovely hand built speakers from someone in Southport, that knocked his Bose ones out of the living room! I am tempted by these Chord plugs, but Naim would surely make there equipment in such a way that it rejects RF interference. Still, here’s to trying one out if my local dealer decides to stock them. Naim use a “clean Earth” not a Chassis Earth, so I can’t see it making much difference, having said that I said the same about Kudos KS1 and Titan STYX mains cables…!