Loved the stuff he did with War - especially Spill the Wine

The timer is set…one of my most memorable gigs The Animals at the 1965 Richmond Jazz and Blues Festival…one of the last numbers was with Steampacket, who comprised Rod Stewart, Julie Driscoll, Long John Baldry and Brian Auger. Shindig the US TV show filmed it you can see this performance on You Tube if you search. I think it was Shindig Goes To London or something similar.

Sounds amazing- will check it out

Love Eric, but there’s only one Rock n Roll Animal.

Eric and War are classic imo. Spill The Wine is one of my favourite tracks of all time. What a pity we probably won’t get this doco.

It was very good. Hadn’t realised that War was a group of 7 musicians that EB formed to support his solo career but after a year or two they sacked him!

I have all Wars albums, love them. However I didn’t know they sacked him, I thought he worked with them to help them get established. You live and learn, thanks.

Here’s link to the You Tube clip, it’s pretty fuzzy but the atmosphere come over , particularly the last performance mentioned in my previous post:

That is very kind of you - many thanks

As for the program I was disappointed too much ground was covered in a superficial manner. 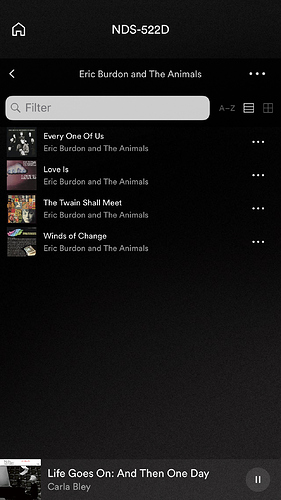 Would have been better if they had given less time to EB’s ramblings!

How good is House If The Rising Sun and Sky Pilot though.

Absolutely agree with you there. The bit about Hendrix and the Black & White Minstrels, Lennon and the Eggman, Gram Parsons in the carpark -complete nonsense.

As a programme about Eric Burdon fair enough, but could have been far more interesting.

I find the problem is, with one or two notable exceptions, most artists have nothing to say that’s of any interest to me! Their talent lies in their music, not in their politics or views on life. I cannot understand why so many people want to know the details of their lives outside of the recording studio. There again, I could never fathom the appeal of magazines such as Hello or OK!

It’s symptomatic of trying to cover a forty or fifty year career in an hour. I think these retrospective types of documentaries are far more effective when concentrating on a particular period in an artist/ group’s career. The editing is crucial to whether it is an absorbing watch or a sprawling mess. D.A. Pennebaker was perhaps the master.

A very good point. I have an almost unlimited appetite for watching ‘rockumentaries’ on BBC4 Friday night but I think the glory days are behind the beeb on this front. I still enjoyed this one but too much time devoted to his ramblings and current singing

I have to check if its available here in the States

Agreed, though there were flawed tracks on three of them (for me, at least). However, The Twain Shall Meet is a West Coast classic – a real unheralded gem. And the string of fantastic singles the band released around then…

As an aside, I remember reading gossip in a music paper of the time that certain West Coast underground bands had their roadies on Eric Watch, as he was wont to get carried away and crash the stage to jam with them, which they weren’t too happy with.