So recently I thought Id try some ethernet passthrough plugs so I could lessen the amount of devices sucking up the WiFi around our property. Internet here is very slow a lot of the time as well.
So one passthrough I put next to the router and plugged it in, the other I put behind the ND5XS and plugged that in…and it works rather well.
Apart from one thing that is.
I found I was getting hum and static through my turntable set up. This I discovered after a time consuming process of elimination. Also as I was fiddling around with arm wires and I/C’s I noticed Id also lost the left channel while playing a record.
So, out with the passthrough and the static is gone but the hum remains and Ive isolated the Dynavector P75/2 as the item that’s dropped a channel.
The P75 is off to a repairer somewhere and the passthrough is now being used down the other end of the house where the BigMac is and Im back to WiFi on the streamer.
Just another turn on the HiFi Highway:rofl:
One positive is the new gear is collectively continuing to burn in, open up and sound wonderful. Two days ago it was like the entire system had just had its sinuses hoovered out. I thought it sounded good before but at present it has opened out considerably.
Ive also done a quick A/B between the grey Snaic and some Audioquest Diamondbacks as I’ve long had a soft spot for the A/Q’s.
In this system of SN2-ND5xs-Spendor A4’s with A23 Speaker cables, the Grey Snaic is far far superior to the Diamondbacks to my thick ears.
Simply put the Snaic says synergy and the Diamondbacks say interference.
Loving the Naim Spendor sounds.

What are you meaning with ‘Ethernet Passthrough’… it actually has a specific meaning to do with cabling mapping, but I don’t think you are referring to that …

Are you talking about powerline adapters? In which case they don’t actually pass through Ethernet, they are a kind of bespoke Ethernet type bridge… and yes they cause a significant amount of RF energy on your mains and connected wiring (they work by injecting a wide bandwidth of radio signals on your mains) which may and often causes interference with sensitive equipment.

Yes Simon. Powerline adapters with passthrough plugs so I can still use the plug. No worries in the end because it was always a toss up between the BigMac down the other end of the house or the ND5xs. 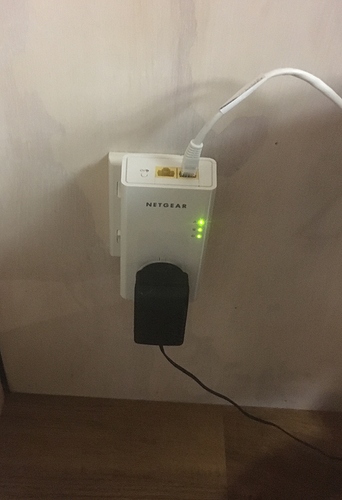 Ok, thanks for clarity, best be shot of them… Naim streamers are expecting wither Ethernet or Wifi … these devices are neither,.

Thanks Simon. Yep Ive put the other one down with the Mac and gone back to WiFi with the streamer. Another one of those HiFi smackdowns. The upside is the possibility of being forced to upgrade my phono stage. Easier to get approval when its the only sensible choice.

Can you run an Ethernet cable to the streamer rather than use wireless ?

Yes but my wife would put the scissors through it.

Remember that these adapters put a high level of RFI onto your mains, so even if they are used in a different part of your house, they may still be attecting your music system.

Thanks Chris. yes when I get my phono stage back I will be looking out for that.

Maybe a noob question but does the RFI issue still pertain where the Hifi is on a separate spur with it’s own CU?

Yes - depends on location of equipment and house wiring. Noise from these devices will couple via the mains wiring and also radiate into the home environment (and outside too) from the mains wiring acting as an antenna. They really are best avoided and never should have been allowed onto the market in the first place.

Yes, and to be clear it’s only RFI if it causes interference… however either way it does generate a relatively significant amount of RF energy on your mains… and being radio is not limited to the wires!!! And will typically quite happily couple to other devices, sensitive electronics and you through the air in your house and even outside… though the field does exponentially fall away with distance from the wires… though because of the relatively low frequencies, the field strength of a few 10s of metres away can still couple and cause interference.