I assume that everybody contributes to the annual show and it’s not just the host nation (aka last year’s winner) that foots the venue bill ?

It seems that the host country is paying the bulk for the show, there is an article up on www.express.co.uk titled “Eurovision 2021: How much does the UK pay to enter?” that provides some more insight into the numbers.

I think I would prefer being forced to watch a re-run of Noele Gordon in Crossroads, root canal work or a colorectal examination than watch that drivel .

It is to music what Giant Haystacks was to ballet dancing

The Eurovision Song Contest is a non-profit event, mostly financed by:
• contributions from the Participating Broadcasters (the so-called participation fee), adding up to €6.2 million combined. This fee is different for each country based on the solidarity principle that the strongest shoulders carry the most weight. It is at the sole discretion of each Participating Broadcaster to decide if they wish to make public the financial details of their participation;
• a contribution from the Host Broadcaster, which is generally between €10 and €20 million, depending on local circumstances and available resources.
• a contribution from the Host City, either financially or ‘in kind’ (e.g. covering expenses of city branding, side events, security, etc.);
• commercial revenue from sponsorship agreements, ticket sales, televoting and merchandise, which varies from year to year

It was a song contest.

It was, in my opinion, far from the best song in the contest.

I wouldn’t be bothered if they put the test card on for a couple of hours,anything except the Eurovision,I for one see no merit in watching/listening to a show packed with,IMO,songs,and I use that term loosely,which are mostly moronic dross.Each to their own,but I’d be willing to bet that not too many,if any,members of this forum have a section in their collections dedicated to Eurovision entries.

Ha. For all its faults Eurovision is fun, that’s the start point. When I was a kid it was one of those fun evenings that we watched as a family, and that’s continued - we still watch it, usually with our kids now but they’re away at uni so it’s just us, and my folks are long gone. It’s still fun though, still enjoyable. Our boys watch it with their pals - I believe it becomes a drinking game of some sort but we prefer not to delve into that too closely. And the last 2 years apart the whole show is the base for Eurovision parties not just up & down the land but across Europe and the wider world - which is why Australia is involved now. It’s a load of fun, and generates a load of fun.

None of us watch it to pick up on the latest hot new acts or to see where music might be heading in the next 12 months; it’s long been accepted that it’s a bit kitsch, a bit MoR and usually a bit dross but that’s part of it. We certainly don’t sit po-faced tutting at how this isn’t real music, although actually it is - one of the joys of having a good system to play music is that it makes even cheesy old pop sound good. Mine will happily bring early 70s pop to life on Radio 2’s Pick Of The Pops on a Saturday lunchtime as much as it will some obscure unheard of band that makes meaningful music man. Music is fun, it brings joy, and doesn’t have to be written by Mahler to make it so.

It’s also another of those traditional markers of the transition out of winter into spring, alongside The Boat Race & The Grand National, altho granted Eurovision was late this year.

There’s only one song that’s ever stuck with me beyond the end of a show so much that I went out and found it - the Russian entry in 2005. I downloaded it and burnt it to a CD, which was then lost in the midst of all the others till I was ripping them all 3 or 4 years ago and it resurfaced, to become one of my go-to songs when I just fancy something enjoyable. Here’s the video - Russia 2005 - but I don’t expect you to enjoy it. I do. It’s fun.

As for the test card… if only there were a minimum of 30 channels on Freeview to pick from when this is on, or the few hundred channels on Sky if you have that, or maybe some recordings to catch up. Or the limitless bounty of Youtube where it’s too easy to follow a path of seemingly unconnected videos and lose a whole evening. Or even, if the Eurovision music is just a dross too far, switch the tv off and play your own choice of music. I’m sure that could be fun.

I don’t know why Robbie Williams hasn’t offered to enter.

Pls don’t type a dismissive autoreply that states “if your into mindless euro pop,as a distraction/fun,that’s your choice”. You might learn about punctuation and spacing too while you’re about it.

You missed my whole point of it as an enjoyable contest. Add in the occasional quite good song & performance and a few pantomime villains thrown in for good measure in the form of the political voting that goes on. I’m into it as the bigger picture, NOT because I’m into ‘mindless euro pop.’

The whole show has very high production values too and looks great on a decent 4K tv. It’ll be even better when they get round to putting it out in UHD - fingers crossed. Before you tut at that too, recall the forum that you’re posting on, where people spend vast sums just to get a slight increase in SQ. Some of us appreciate decent PQ too - F1 in HD looks bland compared to the same output in UHD, so even tho F1 is in itself a bit dull it becomes watchable on a wet Sunday afternoon.

so even tho F1 is in itself a bit dull it becomes watchable on a wet Sunday afternoon.

Cor, barely in the case of yesterday…

I agree with @HouseholdNaim - In my original post - I hadn’t anticipated a quasi political debate on Eurovision. I have watched Eurovision most years going right back to my childhood and as @Canaryfan also reminisces, its a reminder of fond childhood memories and lost loved ones. Plus pushing it through my HiFi speakers means it sounds and looks good.

My original point was about the political voting, The UK entry was by no means a competition winner, but did it deserve “nil point” - absolutely not. IMHO, the Italian entry that won was not enjoyable to my ears, but I am happy to concede that it would be enjoyable to some.

Yes I tend to agree, the Monaco GP is always a bit of a boring procession with little chance of over taking and any changes in position being brought about by strategic pit stops, the most exciting thing about yesterday’s race was the failure of Mercedes to remove Bottas’s wheel nut at his stop which just about says it all it was about as exciting as watching Eurovision

As I’ve alreaysaid,it’s upto the individual to watch/listen or not .My post wasn’t meant to be dismissive,just my point of view,I’m also sorry that you felt so upset that you have to start talking about punctuation and grammar,in my opinion,quite petty,but if it makes you feel better,that’s a good thing.

I notice that the OP didn’t submit his Eurovision 2021 post in the ‘Music’ thread, but instead posted in the ‘Padded Cell’ thread!

I’d be willing to bet that not too many,if any,members of this forum have a section in their collections dedicated to Eurovision entries. 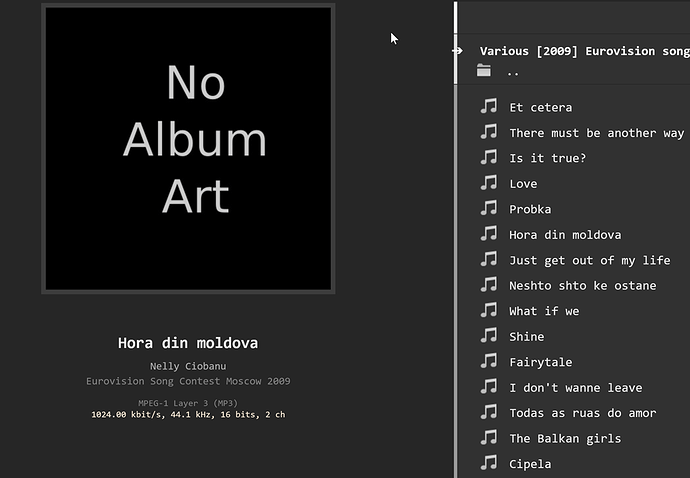