For me the Eurovision Song contest is a lesson in bias, European politics and I would guess a lot of playing instrument miming. I did not watch it this year but was surprised that UK came second. I looked up the song and must say this Sam Ryder has a good voice all he needs is the other half ‘a decent song’, together he could go places. When Tom Jones was discovered he was very lucky as he sung some very good hit songs to boost his career, if no decent song the singer just fades away…

The social highlight of the year for my mum, dad, aunt & uncle was holding a party for Eurovision, hosting it at each others house on alternate years.

It was something we used to watch as a family when I was a lad, and it’s one of those nostalgic things we did together - others included watching the annual Boat Race, Grand National and going to see the latest Bond movie at the cinema.

Naturally back then there were far fewer choices - my daughter is hooked on Eurovision but my son had far more important pursuits (online gaming) last night.

For me the Eurovision Song contest is a lesson in bias, European politics and I would guess a lot of playing instrument miming. I did not watch it this year but was surprised that UK came second. I looked up the song and must say this Sam Ryder has a good voice all he needs is the other half ‘a decent song’, together he could go places. When Tom Jones was discovered he was very lucky as he sung some very good hit songs to boost his career, if no decent song the singer just fades away…

He’s apparently already huge on TikTok, and his partner I believe is also quite popular on social media.

Decades ago, pre-internet I think it was more a fascinating glance at music from our European neighbours which often seemed to reinforce cultural stereotypes. I think the UK had a somewhat snobbish attitude that other countries music was bound to be poor when it was simply different. This is no longer as true with only a few countries producing quirky numbers we’d consider dated and ‘out of time’.

While there is little high brow about it, I can’t really think of any other event (apart from maybe Olympic ceremonies) where we have such exuberant sets/lighting/effects and a very diverse set of performers.

It’s also great how things have levelled up for the most part with the majority of countries potentially being able to field artists with the polished production quality we might associate with global pop stars, even if the music doesn’t quite hit those highs.

Spain apparently had input from one of Britney Spears’ choreographers.

The UK always seems to feel hard done by but we don’t always field good choices, and there are a few dozen other countries with their own talent so statistically we could hardly expect to win other than occasionally. This year’s UK entry was an excellent choice for a change. He also seems to be a very humble chap, and if I’m not mistaken the fact he went over to the act that got ‘nil points’ was a nice gesture - that must be hard for any artist.

Spain gets my vote. Can’t remember anything about the song.

Good ‘heads up’ from you a few months ago though! I wonder what the odds of a top 3 place would have been back then?

OK, lots of sh*t going on at the moment but it’s coming up to the Eurovision fun party and here is the UK entry…Gulp And…It’s actually OK!!!

I mean I’m not going to buy it or anything rash but there is a distinct lack of shambles about it. [Sam Ryder - SPACE MAN - United Kingdom

Well apparently having started imbibing early on in the evening after a bout of gardening and cooking tea for everyone I talked more boll0cks during the contest than even Mr Norton last night.

I really though this chap should have been better placed, the Polish song was very good pop for me: 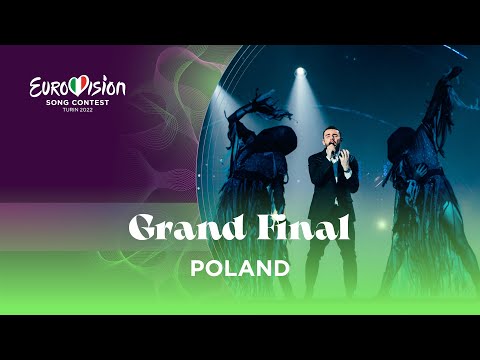 a lesson in bias, European politics

In what way is european politics involved?

The claim that voting is political has been made a few times.

Lol - Yes he owes everything to me…

Comes out of the cupboard once a year and always provokes a heated debate?

It’s gone on for decades, so much so that it became an open joke. It was usually a case of which countries pointedly didn’t give points to certain other countries. For example, from memory:

I’m sure there are many other examples.

… or, you could crunch the numbers: 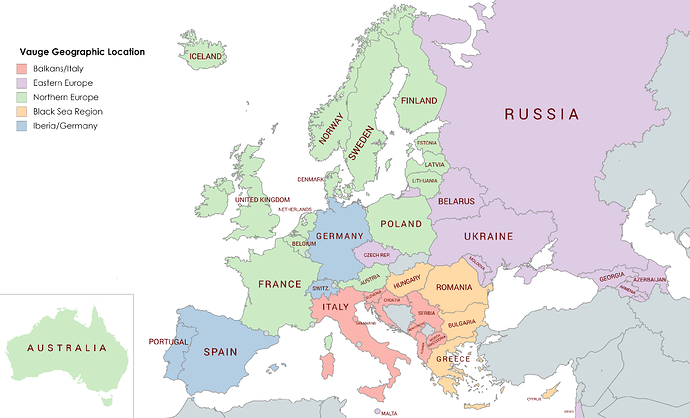 Finding voting blocs in the televoting results of the Eurovision song contest.

than even Mr Norton last night.

Why on earth did have that person commentating? Admittedly as I didn’t watch the performances I have no idea what he was like during them, but during the scoring his comments were largely inane, or he tried to explain what was happening when it was very obvious what was happening as the, I guess Italian, presenters were talking very good English explaining what was happening!

It’s a bit like commentators in sport – so many seem to natter incessantly simply for the love of hearing their own voices, without having anything the slightest bit interesting or useful to say!

… or, you could crunch the numbers:

You don’t seriously believe that.

There is no politics involved. Cyprus votes for Greece because there are a load of Greeks living in Cyprus and are eligible to vote for Greece. Simple as that.

Norway vote for Lithuania because there are a load of Lithuanians living in Norway and are eligible to vote for Lithuania. Simple as that.
You’ll notice in 2021 the people of Norway gave Lithuiania 12 points but the Norway jury gave them 0 points. Similar with Finland. 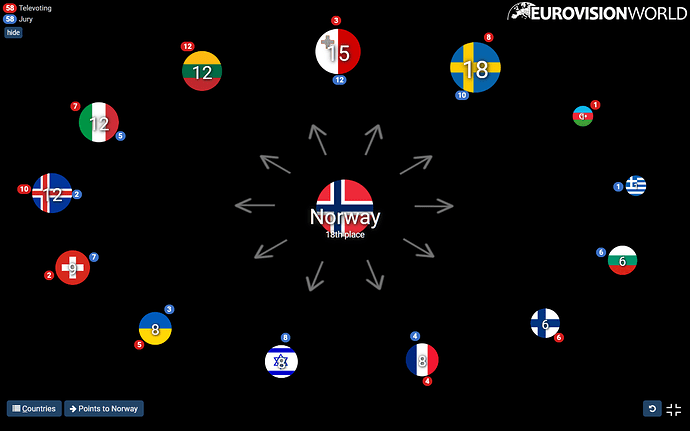 You’ll probably find there are a load of Lithuanians living in Latvia and are eligible to vote for Lithuania. And vice-versa. Simple as that.

Will tomorrow’s Mail headline be ‘Ukranian refugees skewed the vote and stole victory from the U.K’ ?

No - Whilst it could hold true for, say, Poland, UK hasn’t allowed in many Ukrainian refugees….

Since when has the U.K. Press ever felt constrained by actual facts

He took over from Terry Wogan and has done it for many years.

Puppet On A String
Best ever of the UK entries. Probably all entries.

Just look up past scorings of Eurovision contests and you will see that top marks or near top marks given by countries. The best example is marks given to Greece by Cyprus, in 31 instances Cyprus has awarded Greece 28 times ! And most probably vice versa situation will be similar statistics. With those kind of influences Greece can produce a song about shovelling human stools and you’ve guessed it 12 points from Cyprus…