I have followed fan edits closely over the years. While I am no fan of the Star Wars films I have ended up buying the original trilogy multiple times. The only one I can say I truly just enjoy is ‘A New Hope’. When Congress decided to set up a library of the Oscar winning films they asked Lucas for a copy, he supplied his ‘improved’ version, which they rejected. There is a fan edit called the Despecialised Edition, this has used numerous sources including effects they have specially completed to fill in those ‘updated’ areas. The result is a broadly HD version of the original film, rather than the non-progressive print that Lucasfilm eventuially, and very grudgingly, made available. This is the ONLY version I watch of these films.

Despecialised is the gold standard, but involved no heavy editing of the original film, more a restoration.

Why would you want to edit the released film?

An example would be Raising Caine. This was a film that the director struggled with. When the original script eventually leaked online a fan reordered the film and this was later endorsed by De Palma, who then officially released it as the ‘Director’s Cut’. Other films have been re-edited by the actual director and circulated by the them, such as Soderburgh.

Another approach is to release a film having moved it into a different milieu, such as a silent film or an episode of a well known series. The Star Trek movies have been released in the original series format.

A further category would be people who want to excise elements of a film that they detest, such as Jar Jar Binks, or more gently re-shape a film, such as The Phantom Edit.

The glory of these films is they edit the mess of the prequel trilogy excising most of the painful elements. The downside is that the flow of the story suffers. Either way they are an interesting watch, and I would bare a lot to remove Lucas’s dreadful love dialogue.

The film that first got me into fan edits was Spice Diver’s version of Dune, now available on YouTube again. This film adds on an extended prologue and slots in removed elements of the film. It does not turn a pigs ear into a silk purse, but it is probably nearer to Lynch’s intent.

The films where significant editing has almost saved a film are the VASTLY cut down versions of the original Godzilla & The Hobbit Trilogy.

One cut down version of The Hobbit is called The Cardinal Cut. Yes, some of the cuts are less than perfect, but as much of the film remains intact THIS is the version I watch of these films. My BluRays stay in their cases gathering much deserved dust. Here the editor has:
Total length of 3 hours, 48 minutes and 25 seconds (including credits)
Cut the opening titles from DoS and BoFA, and the ending credits from AUJ and DoS
Cut extended prologue (cut between Bilbo starting to write and “60 Years Earlier…”)
Cut the “Bilbo goes to the market” scene; trimmed the Dwarves’ arrival
Cut Azog as much as possible, reducing him to an unnamed background character
Trimmed the Trolls scene so that they use Bilbo as a hostage right away
Cut everything to do with Radagast, Saruman, Galadriel, the Necromancer, Dol Guldur, etc.
Heavily trimmed the chase to Rivendell, and the group’s stay there
Cut the “stone giants” scene
Heavily trimmed the “down to Goblin Town” sequence, and the Dwarves’ escape
Heavily trimmed the “five fir trees” sequence
Trimmed the stay with Beorn (heavily trimmed the reintroduction of the Dwarves)
Trimmed the Mirkwood sequence
Cut the Elves fighting with the Spiders (instead they simply arrive and arrest the Dwarves)
Cut the scenes with Tauriel and Kili
Cut the “river chase” (cut from Bilbo falling in the water to the group washing up downstream)
Trimmed Bard’s introduction
Heavily trimmed the arrival in Laketown, the Dwarves’ arrest, and the departure ceremony
Cut everything with Legolas and Tauriel tracking the Dwarves/Orcs
Cut the Orc attack on Laketown and Kili’s Morgul Blade injury/treatment
Lightly trimmed Bilbo’s confrontation with Smaug (mainly references to the Arkenstone/Sauron)
Cut the Dwarves/Smaug chase (cut from Smaug breathing fire at Bilbo to him leaving Erebor)
Trimmed Smaug’s attack on Laketown, aftermath of attack
Heavily trimmed Thorin’s descent into madness
Trimmed the Elves’ arrival and both sides’ preparations for battle
Trimmed Gandalf’s arrival and Bilbo’s sneaking out
Trimmed Dain’s arrival; cut the fighting between the Elves and Dwarves
Cut the “earth eaters”
Heavily trimmed the Battle of the Five Armies (cut >95% of it)

The result is FAR more watchable, while not solving all of Jackson’s unfortunate choices.

While I am no fan of the Star Wars films I have ended up buying the original trilogy multiple times.

I was swept up in the original AV movement, plugging your VHS player into the HiFi. Then the letterbox edition came out on VHS, the LaserDisc with the only AC3 soundtrack, then …

I don’t want to get too snobbish, there are great elements in all these films, but they are pulp science fiction and there is a lot better out there.

I bought the BluRays as my nod to Lucasfilm for watching the Despecialised editions - which they ask you to do as well.

Yes i agree, good sci-fi with a decent production value is pretty scarce in general unfortunately…

But that is why these re-edits can be fascinating. Certainly it makes me reconsider WHY I dislike a film and what changes I would make.

I have watched and prefer the despecialized Star Wars episodes 4/5/6 because I want to see the originals as I remember them, without all the extra creatures and effects and what not that’s been subsequently added.

Bladerunner I watch the last directors cut but I do have the box set which I think has 5 versions (uk, us theatrical, with voiceover, without voiceover I can’t remember exactly).

Having bought the 4K discs of the Star Wars Original Trilogy, I recently also watched Star Wars: Revisited, which I found a fascinating comparison. Inevitably, no two fans are ever going to agree on exactly which changes were good, which were bad and which were irrelevant, and I think it’s important to remember that.

‘Revisited’ does correct some ‘goofs’ that I’d never noticed even after watching the films since the early 80s, and it’s amusing to see a list of corrections you’d never even realised were problems. I’ll just cite one which is musical in nature:

The addition of’Episode IV / A New Hope’ to the opening title crawl after the original 1977 theatrical release mucked up the synchronisation of John Williams’s opening title. In 1977, the fanfare fits with the receding STAR WARS and the main theme comes in just as the crawl ‘It is a time of civil war…’ starts. Once the extra two lines were added at the beginning, it all went buggerup. Have a look at this and see if you agree: 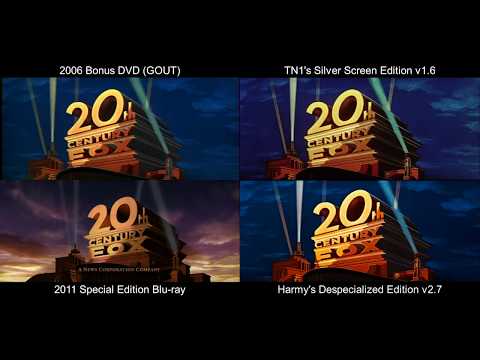 LOTR I watch the extended cuts, although there are many things that rankle me in TT & ROTK. Like you I tend to watch the Directors Cut of Bladerunner.

My favourite version of Godzilla is the fan edit Godzilla-Zilla. This is the 1998 version minus most of the humour and ditsy dialogue. the 15 minutes lopped off emphasises the action, tension & pathos.

Inevitably, no two fans are ever going to agree on exactly which changes were good, which were bad and which were irrelevant, and I think it’s important to remember that.

Yes, I completely agree. Many of the changes I was quite happy with, the ‘Han shot first’ scene in the bar incensed me. I remember watching this when it first came out and thought this was fresh and original, of COURSE he would shoot first. The change stopped me watching the film until I became aware of the Despecialised edition.

I’d never noticed this …but, I do agree.

I have no time for The Phantom Menace, although the Darth Maul fight scene is excellent. The producer of The Phantom Edit has what I consider to be legitimate criticism. He points out that Anakin stumbles onto a lot of his successes, such as the ‘ooops’ when he mistakenly destroys the Space Station power source, of course it is a bizarre place to have such a device! I have to say that I only watch fan edits here in a macabre fascination to see can ANYONE make something worthwhile out of these train wrecks!

N.B. I own all these films in DVD/BlueRay in order to support the studios/artists.

Worked my way through a number of the Fan edits, results so far:

Star Wars Despecialised
As stated above, my preferred way to view the original trilogy.

Star Wars - Neon Noir
Not my cup of tea, plus comments below.

Star Wars - Dawn of the Empire
They have removed much I didn’t like, however, the base material is sooo flawed as to make the remainder poorly edited and painful.

The Hobbit - The Cardinal Cut
Probably better than the original, but as with the Star Wars prequels the source material is SO deeply flawed as to leave it as beyond rescuing.

Peter Jackson is a bit of a target with these edits, and this is no surprise as although he has made a couple of films I really enjoy he is often self indulgent.

I am no great fan of monster movies. King Kong does attract mainly for the pathos of the ending. However, the Jackson version, much like the Hobbit, simply made the journey far too hard for me.

In this case the edit reduces the film from three and a half hours of bloat to 148 minutes of honed enjoyment. The opening ‘get away’ is far pacier and the trip to the island removes the extraneous morass.

I would have loved it if they could have removed the diplodocus race, but there are good narrative reasons why it had to remain. Much of my remaining criticisms are baked into the genre.

What is left is enjoyable escapism. Jackson does a good job of building the relationship between Kong and Darrow so that you can understand why he would pursue her and finally die trying to protect her.

I am glad this edit exists. Since buying the film when it was first released I have watched it once and probably would not have touched it again.

Another curate’s egg for me, good in parts; no longer, this edit is farrrrr better.

In teh original edit the viewer had to work at understanding what was occurring. With this edit much of the inter-connective material has been restored, this makes Harrison Fords character far more central. The price is that the shock value of being told that the final ‘test’ was in fact the war is lost. But, what is gained is of far greater worth.

What we are given in this version s a better insight into the training of Ender and the moral & ethical dilemmas being faced by all the actors. This is a version that I will watch far more often.

This is a re-edit of The Search for Spock, never one of my favourites. I was never sold on the central premise. One reviewer said that this is the film where Shatner delivers his most emotionally rich performance as Kirk and this may be true.

In this version the editor has reordered the events, used standard TV music and used TV series fades and cuts. The result? I think this version does have more urgency and forward momentum. Still a deeply flawed film, but probably the version I will watch …if I ever bother to watch this again!