Faulty Naim Uniti Nova Blew Up my Kanta Nº 2 speaker, help on what to do next

Hello, i own a Naim Uniti Nova, which i bought in the UK on July 2019, and a pair of Focal Kanta Nº2, bought at the same time, but in France. Up until this point, i really liked the system and had no major complaints.

However, last week (10th April) while i was listening to music, my right channel stopped working all of a sudden. I tried restarting the amplifier and when i did, a buzzing sound was noticeable on the right channel, so i immediately shut down the uniti nova and cables, however i started smelling burnt. Thought that was coming out of the amplifier, however, after about 20 seconds, i looked up to my right focal kanta, and there was a lot of smoke coming out of the front and back ports of the cabinet. I was left in disbelief while that was happening, and just sat there while that was happening. This was very serious up to a point where i thought it would cause a fire in my attic. It stayed like that for about 15 minutes. After the initial shock i even got a small video showing some of the smoke coming out of the back port, but that was almost in the end.

I have no idea what was burnt in the Kanta, and how something like that was even possible, so, after a couple of hours, i turned on the Naim Uniti Nova, to see if it was still working, and it appeared to be working normally, so i tried plugging another speaker to the right channel of the uniti nova (yeah, i know, this was probably not a good idea), in this case a focal aria 906, and immediately when i plugged the cable onto the speaker, it made a huge spark and i got an electric shock. I immediately put down the cable, and thought the aria 906 would get damaged as well, but fortunately enough, as this happened in a couple of seconds, the aria is still working fine. On the Uniti Nova side though, it was like it was nothing, the amplifier continued to be turned on like nothing had happened. So basically what we have here is a faulty Uniti Nova which is now damaging speakers when connected to the right channel.

It’s completely unnaceptable that in hi-end gear like this, something like this can even happen, even more when all of these devices are supposed to have surge protection and other safety mecanisms.

I always used Naim/Focal gear in the past, to put it in perspective i also have 2 pairs of focal aria 906, a pair of aria 926 and a aria center channel, besides having used several naim gear up until i purchased the Uniti Nova. Had 0 complaints and really like the sound signature of both brands.

Now at this point i don’t know what to do and would appreciate your assistance. I basically have a faulty uniti nova and one of the focal kantas Nº2 completely damaged, cause by something that should never happened in the first place, and both the Naim and the Kanta are out of the regular warranty. I do not have the financial means to simply act like if nothing had ever happened and by other equipments, and in something as serious like this, doesn’t Naim has to be held responsible?

To be honest, up until this happened, i never even considered the possibility of something like this could ever happen. I was prepared for the possibility of in the future, for an amplifier to be a lot more likely to fail than speakers, but i never thought it possible, that an amplifier could damage speakers and make it catch fire.

Now, i’ve tried contacting both focal/naim and the distributor in my country, and a week has gone by and i still haven’t gotten any answer whatsoever. If Focal/Naim doesn’t come through and provide assistance, what are my options here?

Besides this i also have a question regarding health concerns, as we know, the Focal Kanta has a beryllium tweeter that is a serious health concern if it’s damaged for some reason. How well is the beryllium tweeter protected on the back? I ask this, because i obviously inhalled a lot of smoke, and have absolutely no idea what was damaged in the Kanta to have all that smoke come out of it, so i’m worried that the tweeter was somehow damaged. On the outside part of the tweeter, it’s obviously fine, but on the inside of the cabinet, i have no way of knowing.

At a guess it looks like your amp may have gone DC on one channel - it’s most annoying but can happen. I would also guess that the smoke from the port of the speaker is from something on the internal crossover board - maybe a resistor - that has blown.

Your best bet here is to let your supplying dealer know what happened - give them all the details including what cabling you were using when it happened - and get them to check the equipment over and send back to the respective manufacturers, Naim and Focal if necessary - this is just the sort of thing that they are there for if things go wrong, as appears to have happened here.

I suggest you to wear a suitable mask

and check if the beryllium tweeter was exposed to the fire. Beryllium is extremely dangerous to health. Go to Focal website and under your speaker description you will find a pdf guide called beryllium-precautions for use.

Oh dear. That’s why I would be hesitant to buy a focal speaker with a beryllium tweeter

What a situation to be in

The tweeter assembly is probably best left alone. As previously mentioned it’s more likely to be a crossover component that has produced the smoke so it’s unlikely that the tweeter has had its beryllium dome damaged. If worried, put the provided adhesive strip over the front of the tweeter and get the dealer to check it out properly.

Should it not be 5 years extended warranty for units purchased in the UK?

In any case, wait for what Naim or your distributor says. However, if you have a household / home owner’s insurance, they may well cover it - check your insurance policy.

Bad luck. It happened to me with a nap 200 . It was still on guarantee, so the dealer replaced it . He made a nice gesture towards me and replaced one woofer for free, which burned .
All depends now how commercial your dealer will be with you.

Don’t do that.
This is what is stated in the Focal manual 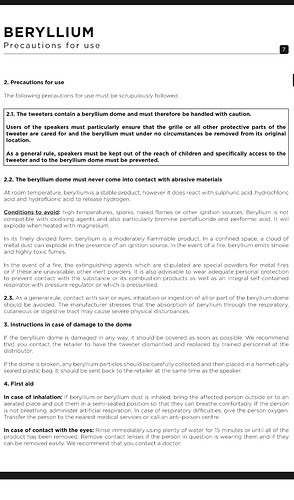 Magico uses beryllium too for their tweeters.
I really don’t understand the reason to use this kind of potentially harmful material in a product that will be used for many years in a home environment.
Not a good idea.

Interested in how this shakes out, as that’s the exact system I have.

This exact same thing happened with my uniti atom when I first got it. I have never mentioned it here as I wasn’t on the forum at the time. It happened with an older pair of diy speakers so I wasn’t bothered really. I was able to take the driver out and have a look and my opinion was that it was the voice coil, and voice coil coating, heating up and smoking because the back of the driver was hot. The crossover was fine with no signs of damage. The speakers still worked fine but I definitely would be chasing a replacement/ service in your situation with much more expensive speakers. I assumed that it was exactly as Richard mentioned and was outputting DC somehow. Scary!
My atom was quickly replaced by the dealer and I was building new speakers anyway, so all was good for me after that. Hope you get this issue solved quickly.

I really don’t understand the reason to use this kind of potentially harmful material in a product that will be used for many years in a home environment.
Not a good idea.

I think if you combine that with speaker stands filled with lead shot you are good to go for a lifetime, however short it might be.

So what is the potential cause for the amp to be sending DC to the speaker?

This is a frustrating situation, I had last year a niagara 1000 that burned a resistance inside. The the smell of burning electronics persisted for six hours, even with the windows open it was present.

Happily it did not damage any of my components and it was exchanged in warranty by the new 1200.

It was a first for me in 30 years, if any of my hardware was damaged I would be very stressed.

In a situation like this who is responsible for the damage? I am just curious, for me the dealer resolved everything.

Absolutely no consolation to the OP, but 50 years ago the Sinclair ZX30/50 power amp modules used to do that if overloaded, which happened all too easily, output transistors failing. The manufacturer had a fixed repair cost, quite low, and I forget how many times I had to avail myself of the service. I seem to recall learning that Julian Vereker’s experience of that Sinclair product was a driver in his move to designing amps (to make better).

The Kanta are a pair of 8000 euro speakers, the 906 are 1200 euro speakers I would be really frustrated with this, and no reply from the brand after a week is bad enough.

My NDX 2 had a problem some weeks ago and still I Am waiting for a response from Naim, that’s not good support. Now their amps burn the speakers to someone that is not a good experience and maybe no one cares.

These things cost a lot to buy to some people, and they are acquired with sacrifice and confidence on the brands, this kind of things should not happen.

Out of warranties it could be a great mess and expensive repair, Naim could have great sound, but this makes me think twice sometimes, because support of a product is also the product.

I agree with @Suedkiez . For the speakers at least. They are incidental damage caused by the failed amplifier. So I suspect you (the OP) are on the hook for the repair costs of the Nova out of warranty and an insurance claim for the speakers sufferring incidental damage. Though be prepared for endless hours with the insurance company and getting signed docs from Naim confirming the said fault could lead to the damage Focal have listed.

Last time I made a claim, it cost me so much time that I worked out it is not worth insuring anything under GBP 4000. Because under that, the time taken to make a successful claim will cost as much.