Faulty Naim Uniti Nova Blew Up my Kanta Nº 2 speaker, help on what to do next

I have some bad news for you. This can happen with any amp if you just use it way past when it should be recapped. Eventually output caps degrade so much they go open circuit. Though normally you hear fluttering rustling noises in the leadup to that failure and therefore some warning that something bad is around the corner.

That’s good to know. However, I presume the Uniti Nova bought in 2019 is quite recent and may not need a recap, so I’m not exactly sure why this had happened.

Absolutely. And unless the OP shares the eventual service report with us (which we don’t really have a right or need to know), we will never know for sure.

Still, s%%t happens. Car, hifi, house, washing machine, health. I think everyone has painfully expensive and inconvenient tales of woe. On the bright side, no one was hurt. When something smokes, take lack of injury as a win.

Amongst other causes, a progressive or sudden failure in a transistor can occur because of a speck of dust 1/1000th of a millimetre contaminating it in production, electrolytic capacitors can progressively fail because of a 1/10mm scratch in the wrong place on the aluminium can. These are just some examples of how component ‘in use’ (i.e. before ‘end of life’) failures can occur.

Given how sensitive these components are, it’s more remarkable how rare these failures are.

Having such a dramatic failure occur is very unlucky (but that doesn’t make it any less devastating).

When something smokes, take lack of injury as a win.

The smoke is the designer’s magic escaping into the air!

It happened to me when I bought a new amp (not NAIM). Blew 2 bass drivers when playing CDs. Amp was not the problem, except that it was DC linked to its inputs. I guessed my CD player was producing DC which was indeed the case. A transistor somewhere inside was faulty and easily remedied. PMC were happy to supply replacement bass units which were inexpensive and easily fitted.

Man, these are some scary experiences.

Hello guys, just wanted to let you know that the amplifier was delivered to Naim about a week ago, and the Kanta Nº2 was delivered there yesterday. It’s taking a lot more then usual, since as far as i can tell, there where issues with the customs processing, but both items are finally in the hands of Naim.

I will update when i have any news, either regarding what actually caused this, and how Naim will resolve this.

especially when the speakers cost £7,500.

But a repair shouldn’t cost anything like that. The cost of a driver, or more than one, or some crossover components, is far, far less than the market value of the speakers.

Does Naim not have output protection circuitry in their amps?

I was also contemplating trying a diablo utopia. Guess I will skip it now.

But a repair shouldn’t cost anything like that. The cost of a driver, or more than one, or some crossover components, is far, far less than the market value of the speakers.

For me, there are two things. First is the cost but as you say the repair of the speaker may not cost much. My earlier impression is the repair will cost quite a bit as it’s Focal. It’s not only about the cost of the parts but labour and brand name. Perhaps I am mistaken.

Next is the repair of fairly new speakers, in this case the 3 year old Kanta No 2. I don’t know about others but being a perfectionist, I wouldn’t be too happy if the fairly new speakers encounter this sort of problem which requires the cabinet to be opened up and a surgery performed to replace the damaged parts. I prefer everything to be original and intact for as long as possible. I usually scrutinise small details for example marks or fine scratches on used gear etc. where most people would fail to notice or bother. The repair of gear or speakers may leave some along the process.

Nevertheless, I accept that these things can happen and it’s just an unlucky incident.

The repair of gear or speakers may leave some along the process.

That of course depends on the design of the speaker and the care taken with the repair. In many speakers drivers can be changed easily without any ill-effect - they are after all easily damaged components and the need for replacement not unknown. And provided the crossover has been fitted sensibly, as one would expect from a decent manufacturer, that should also be readily accessible in case of problem (typically either through a driver aperture or the terminal panel). However I have no knowledge of ease of repair in respect of Focal’s speakers.

To the OP: in the event of the speaker repair being expensive, I wonder if house contents insurance accidental damage cover might be possible to invoke? Probably not what insurers expect as a cause, but it is still accidental damage…

There’s a video on YouTube, by Jay audio. One woofer of the Focal Maestro blew .
The video name is: “ did I blew up my 80 k dollars Focal speaker? “
The reviewer replaced himself the woofer. 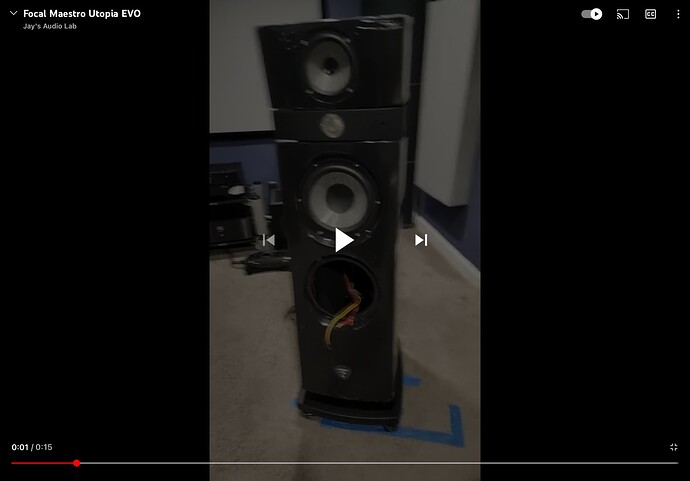 Hello again guys, so i know it has been a long time, but i didn’t really have much to update you on. In the meantime today, i have a meaningful update.

So basically, on these last couple of months, Naim took responsibility on to what happened, and are repairing the amplifier and speakers. The uniti nova has already been repaired and arrived today.

As for the kanta, things are little more complicated. According to naim, the beryllium tweeter wasn’t damaged, but the drivers were. They are waiting to be changed, but they do not have them in stock, and it’s taking a couple of time. So the speaker is still in naim factory, waiting for stock on the drivers for it to be repaired. Unfortunately, It’s been like this for over a month now.

As to what happened to the amplifier to cause this failure, i wasn’t given any information, so i cannot share any info in that regards.

However, i got to thank sincerefully thank naim for standing up to what happened. It’s specially conforting to know, that when something that isn’t suppose to happen, happens, the brand are there for you and takes responsibility for it, even more considering we are talking about hi-end gear. Naim support has also been extremely supportive in this whole proccess, and providing regular updates, even when there isn’t really anything meaninful to update on. Altough i am sad take this situation is taking longer than i anticipated, i understand that this is something naim doesn’t have control on, as they do not have the required parts to repair the speaker yet. So in the meantime, i am now able to enjoy the uniti nova again, but unfortunately, i still don’t know when i will be able to enjoy them with the Kanta’s.
When i have new updates, i will update this thread.