Another cheapo experiment bears fruit.
Once again, being the tight arse that I am, I thought I would try another experiment, ideally, without spending money. Almost managed it this time but I had to put a couple of bob in the meter.
Anyway, down to business.
Up until now I have been happy (?) with using FLAC files through Roon RAAT, through all the networking gizmos into the Atom. Playing around, I thought I would take a chance on changing the file format to AIFF. What’s the point when RAAT converts everything to PCM anyway.
Onwards and upwards, I converted a couple of well liked Albums to AIFF and added them to Roon. Played them back and liked what I heard. Doing a direct comparison to FLAC, switching between them as fast as my podgy fingers would allow, I was surprised at the difference … for the better. In particular, acoustic instruments seemed to have more texture, bass seemed deeper and tighter (?).
Why should this be so? No settings in Roon were changed and there was little difference in the amount of processing going on within Roon. Using the Roon signal path monitor as a guide, I was still getting around 25x. I have upsampling enabled but as I said previously, no settings were changed.
So now, I have converted my entire library to AIFF and added that to Roon. I’ll see how it goes but so far, I’m all in.

Interesting … were you aware AIFF is an uncompressed file format - similar to WAV, whereas FLAC is compressed as is the other Apple format ALAC ?
So the question is if the perceived improvement in SQ is because the data stream has less system load unpacking to convert to PCM with AIFF compared to FLAC; and if so is it in the Roon process, what you you use as server ??

I used to be all WAV & although I found WAV better than FLAC when played ‘as is’, but there is no difference that I can hear when FLAC is transcoded

Yes Mike. I am aware of the differeing format properties. Roon server is a NUC.
As I mentioned earlier, Roon doesnt seem to be working any harder or less hard feeding AIFF as it did with FLAC but theres something going on, what I dont know.

Just a question: if copying the CD, using dbpoweramp, in ‘lossless’ flac - I presume there’s no compression whatsoever? (Forgive me: still learning). I believe dbp ‘wave’ is wav - am I correct? (Which I now use - just a lot of previous stuff done in flac).

Did try MinimStreamer (Up)converting to wav 24; didn’t like it, went back to ‘no conversion’ - much happier

Sorry: just a ps
When ‘upconverting’ most of my naim app playlists couldn’t play the tracks that were converted

dBpoweramp ‘default’ rips FLAC to compression level 5. It can be set to rip to none or max compression, but there is little point IMO, level 5 does it all.

Lossless means all the data is complete and unaffected by the compression process.
As opposed to Lossy, this reduces the file size by permanently eliminating certain data, e.g. MP3 is lossy.

You can set the compression level for FLAC rips…so typically the rip will be compressed but more importantly it’s still a lossless rip (you can set set it for no comprression). Yes “wave” is wav

Many thanks for that

I tried the same experiment using the WAV format. Much to my surprise, there was a small but noticeable improvement over FLAC in some cases (but not all). The improvement (or lack thereof) correlated fairly closely with quality of underlying recording. For example, recordings on the Channel Classics label (which I have found to be uniformly excellent) showed improvement, whereas lesser quality recordings less so or none at all.

I also suspect that whether difference is audible depends on how detailed and revealing a pair of speakers you have, but obviously am not in a position to do any comparison.

Done the same experiment in Roon and I hear zero difference. Tested in two scenarios. On my Atom and RME DAC. Also listend to wav, Aiff and flac in Audacity outputting to the RME so I could switch between each seamlessly as you can run them in parallel on seperate tracks and solo one at time, absolutely zero difference. This is a very revealing DAC and amp for headphone listening.

Well, this is a ‘works for some’ tweak. Win or lose, it’s worth a try.

As noted, I suspect that this is strongly correlated with the quality of the particular recording, as well as speakers. What albums did you try?

Not sure how different recordings can show a difference more than others, if there is a difference it will be present in what ever you play.

This is what I used as it’s the only album I have in wav, and I converted it to Flac for my normal usage this is normally in my backups.

And using Roon it’s sending raw pcm data to the DAC, all decoding is done server side, so the Naim or any other DAC has to do nothing to the incoming source.

First, my comments are based on empirical observation. All I can say is I heard what I heard.

Second, a better recording has more information— greater dynamic range, better tonal accuracy, etc. — than a lesser (e.g., highly compressed one, as is often the case with rock or pop albums). To the extent that the WAV format is more revealing (for whatever technical reason), it can only reveal wha is there in the first place. A photographic analogy is perhaps helpful: a photograph shot with an average or mediocre lens benefits less from the RAW file format (which losslessly captures all of the information from the sensor) v. the lossy JPEG format. Conversely, a photograph shot with a top quality lens (say a Zeiss) on a solid tripod benefits more from the RAW format.

Flac does not loose any musical info it’s the same PCM data as WAV its not throwing away musical info that cannot be retrieved like MP3 or AAC. So your theory here won’t work. Flac is essentially a zip file that looks at the data and compresses losslessly to make the file smaller. Its not encoding the musical info. Most rippers will rip to wav first and transcode after. If you have 1000 word documents and zip them up it will be very small. Unzip it you loose nothing that’s how flac works.

You are confusing the digital data with the analogue signal after conversion. The conversion might be sensitive to noise generated by the extra data processing required to uncompress the flac. Many can hear a difference in a revealing system - but not everyone.

When it’s done on the streamer perhaps although Linn and others seen to be immun. It’s hardly taxing to decompress a flac file though. And all this is done via Roons server. The op uses Roon so there really is no reason it should sound any different and in my tests it doesn’t and I have an Atom as does the op.

All I can say is I do find a difference. Don’t know why but it is definately there.
Logic tends to point to the decompression of a Flac file but this is happening on an up to date NUC and the processing overhead between Flac and Aiff is 0.3 x as shown on Roon Signal Path.
I stand by my results and what I hear. 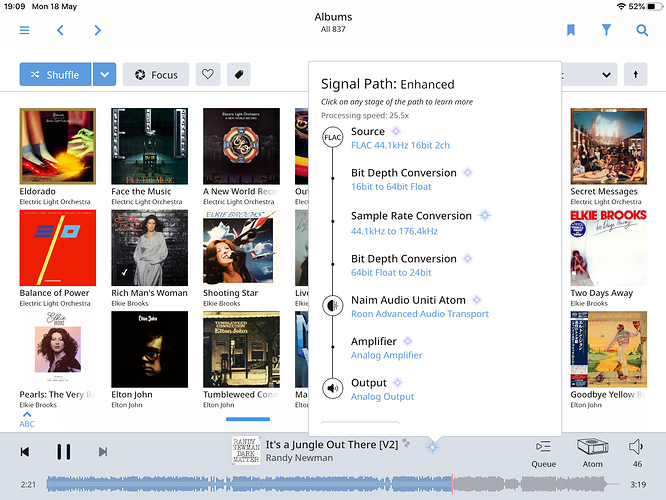 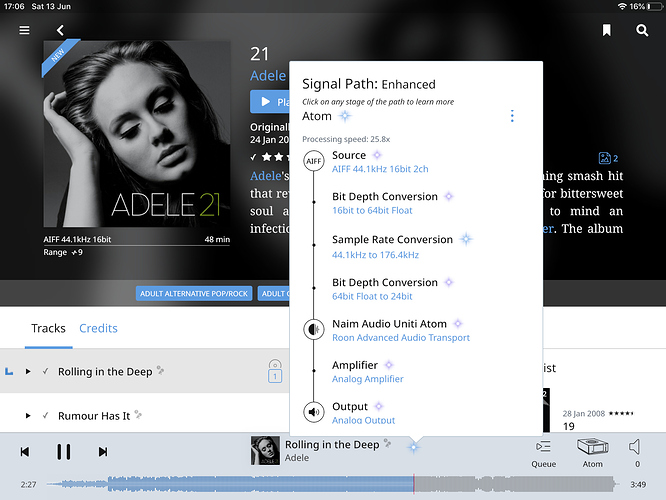 With storage space so cheap, I rip everything to AIFF, sounds as good as Wav, but has much better metadata support.