Not Naim related but somebody may know given the expertise in all things FM related.

Our daughter has just gone to university and taken with her her small Pioneer radio/streamer. It has an FM tuner built in.

The reception isn’t very good, she can’t receive the regional station at all despite it being fine in the car when I parked under cover nearby. The radio has a single piece of thin wire coming out of a coax connector so I suggested that she purchased a T aerial instead.

It’s arrived and we have now discovered that the coax connector uses a very thin pin so a standard coax plug won’t fit. The plug looks like a coax plug and it isn’t an F connector as it just pulls off, i.e. there’s no thread on the plug.

Any idea what this plug is called, it’s the black connector in the picture below? 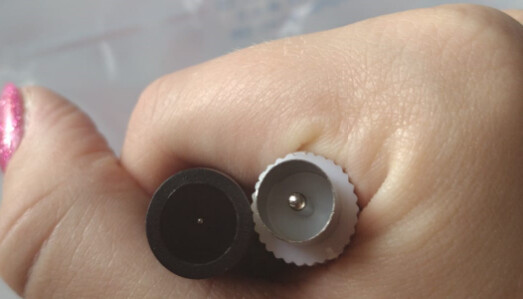 What is the model of the Pioneer… or can you post a close up of the FM socket on the rear?

I can’t photograph the back currently as it’s not at home. The manual doesn’t seem to help, it just shows it labeled as FM 75 ohmn.

I might be on to something though. We used to have a Bose Lifestle system in the conservatory which has been replaced with a Qute and I recall having the opposite issue when I tried to reuse the Bose antenna. I have managed to locate it and I think it may fit. I wonder if its a push fit F connector, it looks identical to a normal coax connector save for the very thin pin.

We’re popping over to see her on Sunday so I will try the one I have, if no joy at least I can take a look at the socket.

The silver one looks like a PAL-male termination, popular in Europe. The black one is an F-type male. There are all the expected possible adapters between F-type and PAL, but they are a little hard to find in the US. I got mine from Amazon.

IIRC, my NDX-FM has PAL female terminal, but NAT05XS, UQ2, and NAC-N 172XS-FM have F- type female. Surprising inconsistency for contemporary pieces from the same brand, all US-spec, but not a huge problem.

If she can find a tame electrical engineering student, they usually can’t resist solving a wiring problem. They usually accept liquid payment, too.

Hope she enjoys the term - is it her first?

I recall seeing something similar on an old piece of kit.

The socket on the unit will look like a coax socket but accept only a very thin wire into the (hollow) central pin. A standard coax cable ending with solid pin won’t fit.

Coax female coupler is a couple of quid, worth a shot.

Yes, first term, she’s at the University of Winchester taking a degree in primary education.

Thanks, I will look out a coupler, I’m sure I have kne somewhere, We’re visiting tomorrow taking her grandad up to see where she’s staying along with some shopping that’s built up over the week!

Excellent - good luck to her. Good primary teachers are worth their weight in Rhodium and can make such a difference to a child’s start in life.