For those on Qobuz...try this

Abbey Lincoln’s album “Straight Ahead”
Listen to the Hi Rez version, and then to the CD version.
It takes 3 seconds to realize that the hirez sounds horrible and the CD is very good.
What I’m surprised at is that they have the same artwork…so I assumed it is the same mastering with just different compression, but this is completely different. Anyone can explain what happened here?
Should we always check on the cd version before listening to the hirez one? Strange Days!

I don’t know the album but generally this can be the case. There are quite a few options available including, CD rip, purchased download, Qobuz/Tidal CD quality (note several versions of same album/remasters etc ) and Hi Res. There is no guarantee of a hierarchy of sound quality you have to use your ears.
Generally I have found the Qobuz Hi Res better but in some recordings it is clearly not the case.

When you say the CD version do you mean the 16 bit version streamed from Qobuz or CD rip on your local storage device?

Yes…That’s what he means

Which one does he mean @Meni.

I guess the 44.1/16 Version that is available as a seperate album on qobuz ist remastered and also louder. Because of the louder volume it is difficult to compare.

There is another 44.1/16 version „bonus track version“. This sounds more similar to the hires version I think.

But I did only listen to the beginning of the first track yet.

The original version of this album was on the Candid label but for some reason, on Qobuz, this version is under Max Roach’s name and sounds fine to my ears. The other version’s are on RevOla (HiRes) and Coolnote.

Hi Gert, yes louder for sure. But it also has in my opinion greater dynamics, and sense of space…it sounds much wider?

If you look carefully at the two version Qobuz have, they have different label/distributors and product IDs
The 44.1/16 is by CoolNote and the 44.1/24 is by RevOla

Hi Simon, thanks. Interesting! Looked it up quickly and RevOla doesn’t seem to be a “cheap, in for the buck” label, all the opposite. Go figure.
Now the key question is also if you hear the difference I’m hearing? Can we agree that, on Qobuz remote streaming, the Cool Note sounds much better than the hirez RevOla? Ultimately we all hear things differently which is also fine: something that may look obvious to me may not look/sound the same to someone else!
I remember from market research days in food industry…a strong preference for product A vs product B would be 55% vs 45% (meaning still 45% prefer product B in the blind test)

No one seems interested in the Candid label version of the album?

The CoolNote and RevOla versions could be (are) probably out of copyright albums.

But technically it will surely be the original mix master that is copyrighted… so I can’t see how one version of that can be in copyright and another that isn’t… unless it is remixed.

Let me look into this in a few hours

Ok so now I listened to this 3rd version of the same album. I find that it is the better one, it makes the other cd resolution version sound excessively brilliant and focused on the voice of the singer which appears too forward, there is more balance, nuance and musicality here, with the different instruments more apparent and playing together.

One question though: where do you guys see the information on the labels: I couldnt find it? 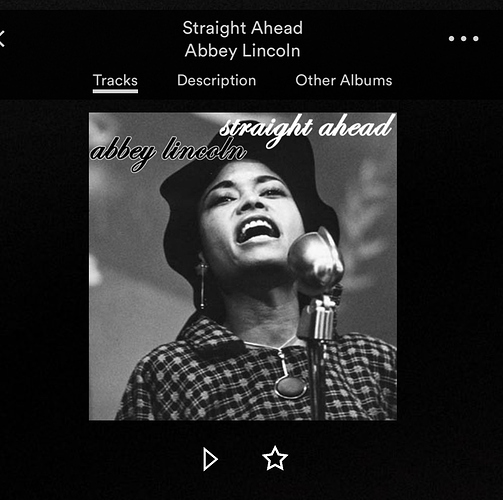 Still to these ears a bit too harsh and edgy…what do you think?

There are 2 versions of the album on Tidal. Both are labelled as 24bit AAC (and MQA Masters), but one of them is also labelled as a re-master.

I’m now up to 5 versions of this album, on Qobuz, and that’s not counting the one under Max Roach’s name, the only one worth spending any listening time on IMHO.