We’ve had watches, cars, cameras, then the recent English threads reminded me of school, then fountain pens.
My handwriting is appalling, much the effect of a physics teacher with eidetic memory. He used to read the relevant section of Nelkon and Parker the night before and then stand at the front of the class expecting us to write down every word. He had not heard of dictation speed!
Regardless, apart from a decent pencil, fountain pens are my favourite writing instrument.
These are some of mine. 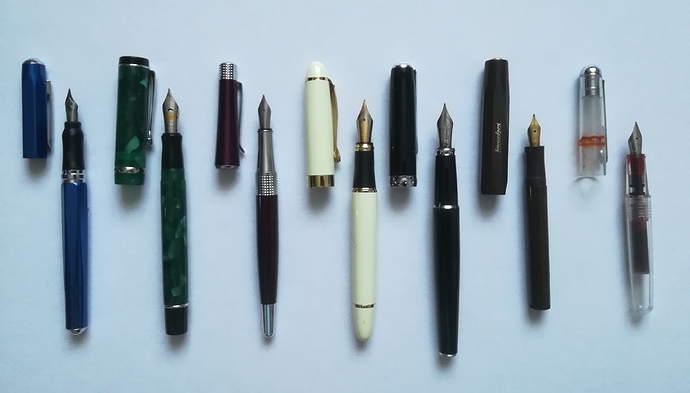 IMG_20190921_093611.jpg3834×2186 1.22 MB
Left to right -
Ohto - fine nib, a dry writer and for me scratchy, but it is my shopping list pen
Conklin - the appearance is very similar to a Swan pen that my father owned, sadly stolen in a distraction burglary.
Cross - picked up in a closing down sale, replace a similar one that I had at college, a bit small in the hand, but a nice fluid writer.
Jinhao - a brand found on Amazon, Chinese copy, I had nieces and nephews that showed an interest as they reached sixth form. About £18 for 5, the Quink ink was more expensive, but a fun gift.
Diplomat - absolute bargain, about £20 in a John Lewis sale because the box and paperwork were missing.
Kaweco - pocket pen, bought for that reason.
J. Herbin - another pocket pen, the first I found, then replaced by the Kaweco because it tends to leak.
Not shown, I have a few Lamy Safari and despite being low cost, none of those shown is a better writer!
8 Likes
Beachcomber September 21, 2019, 9:19am #2

I have bought lots of fountain pens over the years - like you, my handwriting is appalling, but slightly better with a fountain pen. They are lovely things, I think - at least many of them are.

What a wonderful topic. The art of handwriting is becoming a lost art which is a great shame. If you love pens then the ‘cult pens’ site is well worth a visit.

My favourite is the Pilot Capless a fountain pen which has a push top that retracts the nib with Pelikan or Diamine ink - currently I’m using the colour saddle brown. 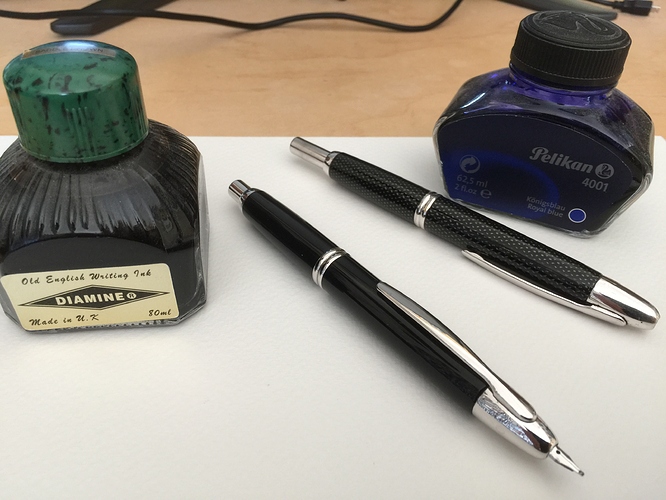 I love fountain pens. I’ve got a black Parker Sonnet and matching pencil which my late wife bought for me.

Whilst I’ve never owned a Fountain pen I saw a Antique Fountain pen undergoing a full restoration on the Repairshop programme most fascinating didn’t have a clue how they were made or work until I watched this programme.

I have been a user of fountain pens for a very long time - had to use at school from age 8. Like others have said, my handwriting is much better (or should I say less bad?) using a fountain pen. I hate cheap biros.

My favourite which I have had for three or four years is a Porsche design pen.

Its weight and balance is just lovely. Felt a bit scary spending over £200 on a pen but it has been really worth it. The design looks like it will get really dirty but I have never had to clean it and take no particularly special care of it

I got the Porsche fountain pen as a 20th year anniversary gift from my company. Loved the look and feel so much I bought the propelling pencil and biro to make the set. A beautiful bit of engineering.

I didn’t want to know there is a propelling pencil - rather fond of them too although I don’t really use them any more. Not sure you can still get them, mind…

Yes I think they are still available check out the cult pens website they are both a great companion piece the biro less so but the pencil is a must if you have the fountain pen.

I have already been on that site just now! Bought some Faber Castell fountain pens and a propelling pencil from there years ago before I found the Porsche. And I like a much thicker lead in my propelling pencil than 0.7mm - my father was an architect and he had several propelling pencils (this was 40+ years ago). I never got one until around ten years ago though

Mine is a story of pens once used but now lost… At school I used my Father’s Gold topped Shaeffer but after that went missing I was given a Matte Black Parker 25 set, which I was very proud of as most were silver, and still wish I had (what is it with pens - where do they go??). In my 20s and working in Insurance I had to have a decent fountain pen again and so bought a wonderful old teal coloured Parker 51. That went missing so I replaced it with a 21 and after that also went missing I bought a lovely old Parker 17 pen and pencil set in Navy blue (slightly too small for me, but it was too gorgeous to pass up). I just went to go and see where that is, but can’t find it - could it be another fountain pen gone missing…?

where do they go??

…or odd socks, depending on the mood of the fountain pen fairy…

I still have a Parker 51 that’s around 50 years and still works perfectly.

I always used to take the mick out of the big fat status-symbol Montblanc Meisterstuck 149 fountain pens, but had to admit, to my embarrassment, that they are superb writing instruments which I now much prefer for my creative writing. The OBBB nib is incredible - a wonderful, fluid, fast writing experience. I have two pens with it and one with an OBB, as well as a LeGrand with OBB nib.

When I was a trainee accountant / auditor I had four fountain pens (all fairly cheap Parkers) - red, green, blue and black ink for different coloured audit ticks

Cult Pens is indeed a favourite. I am an absolute sucker for stationery shops, a bit like Poundland and CDs. They send me a monthly email with special offers and then fulfil the order next day. Of course they sell Diamine ink, the vast range they make (and they are a UK business) makes one wonder how many users there are out there. The Conklin is filled with Night Sky shimmering ink.

My parents both had Yard O Led pencils, again victims of the burglary. I don’t have any of that standard, tending to use disposable ones as they regularly go missing. I have several clutch pencils and one favourite, a diminutive Zebra that is about the size of a diary pencil and very comfortable to use.

I was given a yard o led as a leaving present. When it ran out I couldn’t get a replacement pen bit as it was seized solid, sadly

I’m rubbish with fountain pens. My hand writing’s bad but gets ten times worse with a fountain pen. So, I use a ball point.

At the moment, a Montblanc 4 colour pixomat, a sterling silver Parker and very nice Waterman that the father in law gave to me at Christmas. 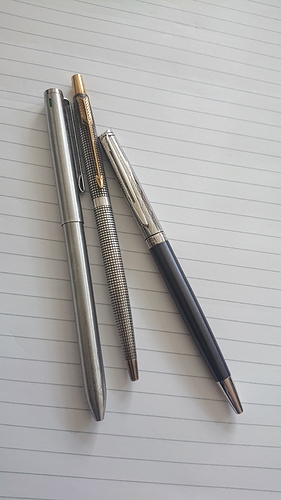 I have used FPs since I was at school (35 years ago) and I have got quite a few over the years. Here are some of my thoughts and preferences.

My favourite pens are German - mainly Lamy and Pelikan. The key things I like in a pen are piston fillers with gold nibs. I have 3 Lamy 2000s - one a BB (double broad) I got converted into a stub and 2 broads (one is left at work). I also have a Pelikan M800 B and an M1000 B - the M1000 is a bit too big and the nib is too flexible for general use but I think the M800 is close to perfection. I will admit to owning a Mont Blanc 149 - its all fine, nicely made and writes well, but is way over priced. I have got a Lamy vista that is great fun - cheap, transparent, writes well and the nibs are interchangeable and you can get some interesting nibs for about a fiver a go for it. TWSBI pens are also good fun, well made and great value - they even provide a spanner to take the pen apart! I have got a few other pens but if push comes to shove, the pens I will keep are the Lamy 2000 B and the Pelikan M800 B.

In my experience the writing experience is governed by 3 factors - the pen, the ink and the paper. Sometimes if you have a wet pen, it can be tamed with a dry ink and vice versa. Pelikan standard ink has a reputation for being dry for example. I like Rhodia and Oxford Optik paper - nice and smooth and take FP ink well. The Oxford Optik paper is widely available and quite cheap - I get notebooks with it from Asda near my work - I think an A5 100 page notebook is about £3.

Favourite inks are Rohrer & Klingner Royal Blue, Waterman Florida (now Serenity) blue, Pelikan standard Royal Blue, Pelikan Edelstein Tanzanite (kind of a dark blue black and wet for Pelikan ink), Pelikan blue-black and Graf von Faber Castell Cobalt blue. The last one has a lovely colour but is monstrously expansive at £25 a bottle! I also like iron gall inks (the one I have now is R&K Salix) - this is an ancient ink recipe that changes colour as it dries (mostly to a steely blue black) and is truly water resistant. Lamy blue black used to be iron gall but I understand they changed the recipe about 10 years ago - its still pretty water resistant though.

I also buy from Cult Pens. Another great UK dealer is The Writing Desk in Bury St Edmunds. I have bought from both of them numerous times and the service is great.