Anyone out there using, or used one of these ? If so do you know how high it is (from record to bottom of headshell) ?

I ask as I have a Rega Planar 3, with Rega Elys and/or Exact and neither seem to float my boat - I’d like to try another and the Goldring is well reviewed and in my price range (and easily available, though no local dealer to try to audition one). Compliance seems okay for the effective mass of the Rega arm so should match, except VTA if the cartdridge is much taller than the Regas.

My objection(s) to both Regas is the tonal balance which both seem to have a bit of a suck out in the mid range (compared to ripped CDs and downloads - HD and SD) and lacking in detail. Tracking seems poor too - neither seems good with my HFS test disk.

I used to have (probably still have somewhere) a Goldring G900IGC which I liked a lot with my old Ariston RD80 t/t back in the day (which I also still have stored away), hence asking about the Goldring. Other suggestions of MM cartridges around the £300 level also accepted

If that doesn’t work then it’s probably time to give up on vinyl - I’ve ripped most of my albums to flac so I’ll go with that, but that’s similar to another thread - I feel the Rega combination is nowhere near as engaging or enjoyable as ripped CDs/downloads from NAS and feel it should be better than it is, even if it won’t equal (or better) the digital source.

I had a G1042 on my Rega-3 when I sold it.
I can best answer your height question with a photo I have in my archives. For sure it didn’t have a height problem.
I went thorough all the cart-fav-raves in the 80’s & 90’s, Linn, Rega & AT’s & for me the Goldring was the best MM for SQ in a Rega. 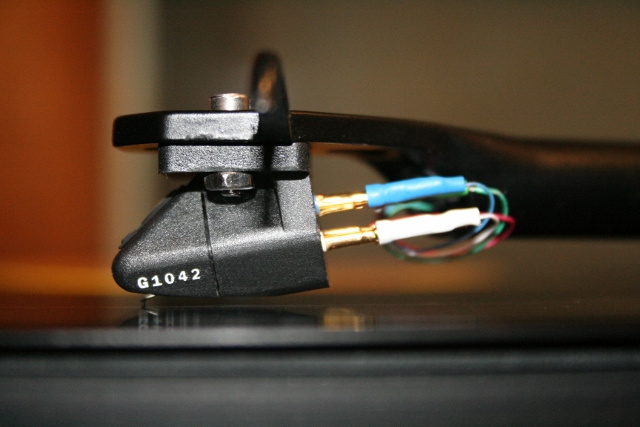 Thanks for the speedy reply (and picture) Mike-B.

I went through most cartridges in the 80s too - Ortofon, Grado, AT, Shure, Stanton and more, before I settled on the G900IGC. I never felt the urge to replace it with a lower compliance cartridge, despite it not being ideal in the Linn arm on my Ariston RD80 ( I think the resonance freq was around 4Hz, which is rather low with a warped record - how the speaker cones moved

). Ariston went bust just before the motor in the RD80 went pop - I did eventually get a replacement, but by then I’d mostly switched to CD. The motor going made it a complete switch - I didn’t buy any vinyl again until a couple of years ago.

I do know that some CDs on my then CD players sounded “worse” than their equivalent vinyl on the Ariston which is why I did re-motor it - it just became impractical to maintain when other ‘fixes’ were required.

I got the Rega “purely to transcribe my albums to digital”, or so I thought - I then decided it would be a better idea to do that, and then use it to actually play those old records.

What’s your phonostage out of interest? His is the standard Naim boards in his NAIT 3.

Ok. This surprises me because I’ve always liked Rega mm cartridges into the Rega fono. But it was the Fono, never the one with the usb port.
However, we are all different.

I may well change the phono amp in the future - when I bought the RP3 it was initially just to rip all my albums from the 70s and 80s onto my NAS, hence the USB potted version.
I bought the record day Frankie “First 48 inches” box set which sounded bl00dy fantastic so decided that actually playing the records may be a good idea, but the Elys never really got my attention on anything else. The Exact is much better, but my memory of my old tt/cartridge is of a much less recessed sound which often equalled, or bettered CD - I think that tt wasn’t as good as the RP3. At the time reviews thought that to be the case. If so then I expected the Rega to be much better. Perhaps I need to get the old Ariston back from my mothers and get it working again, though it’s nowhere as practical as the Rega.

It’s a great cartridge for the money. I had one for years. Firstly in my Thorens TD160 II / SME IIIs set up then later Xerxes / Origin Live Modified RB250. Stonking performance in both - but definitely better in the latter. About 18 months ago I had an itch and the stylus needed renewing - so I went for an Audionote Q3 which uses a breathed on 1042 body. It is 2-3 times the cost but significantly better. Detail retrieval across the board is astonishing and it tracks wonderfully and very quietly. Some of my vinyl sounds as though it is now brand new.

Hi @TallGuy,
I run a 1042 on a Linn Basik. Its a great cartridge. I have found, as many others have, running slightly heaver than the 1.75 grams is much better. This pic is running at about 1.9 and sits a bit lower as a result. if you need another pic running as standard 1.75, then give me a shout. 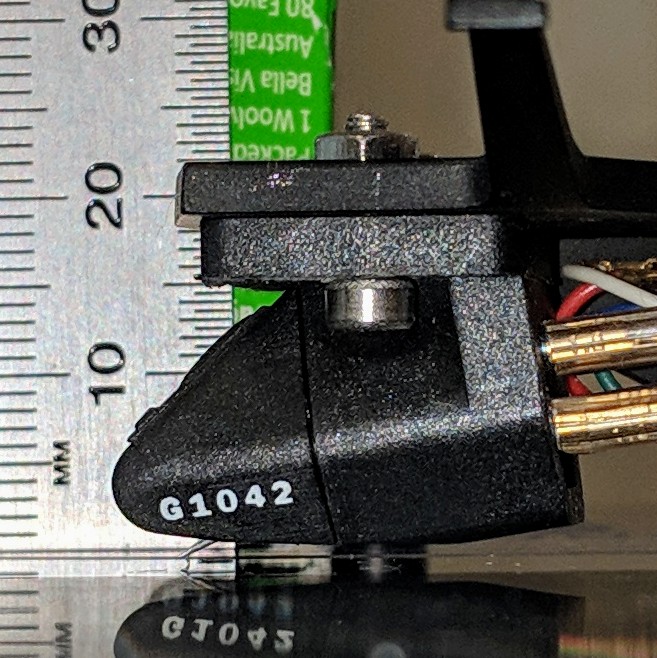 I used to use one with my Linn Basik, I loved it sounded amazing, but some very small people in the house at the time managed to break 2 styli in a row so I gave up and put the TT away. If I remember it’s a big body and tended to be quite low any warps and bounce bounce.

I only resurrected vinyl a few years back but choose a cheaper Goldring to start with. It never sounded as good again and I fancied something more modern so eventually upgraded to ClearAudio Concept MC TT and I kept the MC cart that came with it. Still have the 1042 cartridge somewhere but without the stylus.

Had the same combo and tracking weight.

run a 1042 on a Linn Basik. Its a great cartridge. I have found, as many others have, running slightly heaver than the 1.75 grams is much better. This pic is running at about 1.9 and sits a bit lower as a result. if you need another pic running as standard 1.75, then give me a shout.

Thanks, I think from both pictures on this thread the top of the cartridge looks pretty much parallel to the disc surface - my worry was that with the Rega arm having a fixed height that there would be an downward slope towards the bearings, thus bringing the cartridge body into contact with the disc - the Rega arm height is (obviously) set for Rega cartridges, which don’t look to me to be as tall as many other brands.

Now I need to find a dealer - according to Goldring’s web site there aren’t all that many, however there are internet sites selling it that don’t appear on the list, but claim to be official stockists.

You can get spacers to increase the arm height on Rega decks I believe. 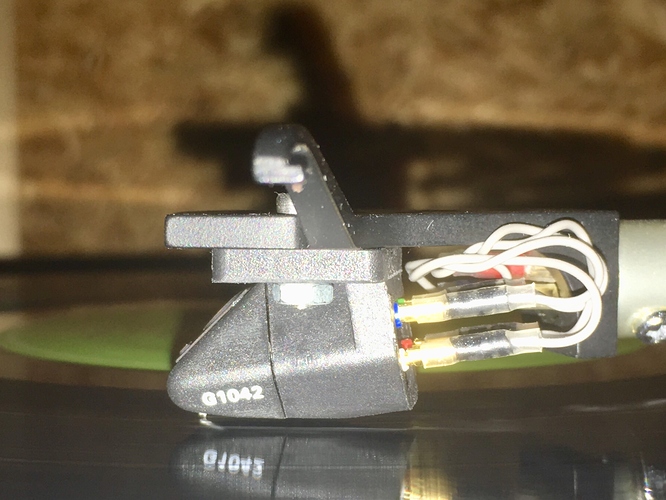 Tallguy, I’ve used Goldring 1042 cartridges for many years. First on a Manticore Mantra and currently on my Linn LP12.
They’re a very good cartridge for the money and I’ve never felt the need to upgrade it.

Bears an uncanny resemblance to a few older Vauxhall Corsas round here.

I always thought it was more a Ford Ka

Well, I finally gave in and bought one. Arrived last night so now fitted without too much bother (getting the nuts in place wasn’t the easiest thing), it adjusted easily enough.

Had a problem - the arm lift on my Rega droops towards the end away from the lift so the stylus was still on the record surface when I raised the arm ! Looking head on I can see the rubber piece drops in height, which is probably a manufacturing fault. Luckily there’s an allen headed screw that allows the height of the raising platform to be altered, so all is okay now.

Set in 1.8g, dug out my old HiFiSound test disk and set bias. Swapped the test disk for Dark Side of the Moon, and…

…with no run/burn in, marvelous

All the tracking distortion is gone, there’s a smooth top end, a powerful low end with easy to follow bass lines, no overall tonal anomalities, plenty of detail, but not that’s thrust at you, no real noticable surface noise and an overall sound that says “play another one”.

It’s different to streamed music from my NAS, and probably not as good in an absolute way, but it certainly makes those old records enjoyable again, which is what was missing.

Mostly though, I’d go for it being different, but no less enjoyable. A good buy, and certainly one that’s recommended to anyone else with a mid range/budget tt that thinks there’s something ‘missing’ from vinyl reproduction.

Thanks to everyone who helped me make up my mind.

I have had one of these on my c1994 Rega Planar 3 for five years or more and remain very happy with it. Aside from a nice balanced sound I really like the ability to replace the stylus while leaving the main body on the arm and some of the cost in the bank! I experienced some distortion a couple of years ago and a new stylus sorted that out. In my experience 1.8g is on the money. I also have the Rega Fono

Good to hear Tallguy. Many, many years ago I had a Roksan Corus Black (based on the Goldring) fitted to the Linn arm on my Manticore Mantra and when it came time to change the stylus I replaced with the stylus for the G1042 and was a very pleased with the results.