Who is missing going for a good old rummage around charity shops, record shops, car boots for old vinyl and CDs know I am, it’s not the same just looking on the Internet it’s not the same atmosphere or smell you get in a good old shop, plus you don’t get that ooooo look what I’ve just found brill feeling

Hi,yes it’s a massive part of the whole music experience,that feeling when you stumble on something you’ve been after for a while,or alternatively something totally out of the blue that turns out to be tremendous,hopefully we can get back to some”crate digging “soon !!

Who is missing going for a good old rummage around

I’ll put this on a par with the disadvantage of streaming: the lack of tactile experience.
The search ritual, the surprise of the goal that may be ahead.
I really do miss it.

Can’t remember when I first came across that phrase and didn’t understand it until I was in a second hand vinyl shop somewhere in France years ago,the whole shop was just stacks of crates,spent a couple of hours on my knees sifting through the stock,if I remember correctly I came across a couple of albums by a French band called Ange,suffice to say I now have around a dozen albums,can’t understand a word,but the music just hits the spot !

Not wanting to gloat but it’s not a problem here in the deep south of NZ on the other hand lack of good music, hi fi or second hand stores is a bit of a problem in a small city.

Have not really enjoyed flipping through CDs/LPs that much as I’ve got older, no matter whether record shop, charity etc.

It gets quite tedious.

It’s amazing how many Dido albums you find in charity shops,

Yes, I greatly miss going through the racks and boxes in a real record shop. Plus, I have a tower of records waiting to go to Flashback - it’s about 3ft high now… it’ll get unstable soon. Bit like me.

We’ve got Penny Lane here, lots to pick through

Every time I walk in, I feel like I’m in that High Fidelity movie

I miss the glory days of the ‘mega’ stores - the days when just around the corner from the office even in Leadenhall Market - Farringdon Records had a massive store. Not to mention Fopp’s brand new gargantuan shop on Tottenham Court Road which must have been open for less than a year.

I was so luckily to have been around in those days when browsing was just such fun. I could go into Virgin at the top of Oxford street on an early Saturday morning start at ‘A’ and take the whole morning and some of the afternoon before arriving at ‘Z’ and that was just the Pop/Rock section. If I couldn’t find what I wanted then off to HMV or Tower.

Then moving to Dublin for a few years and the monster Virgin shop on Aston Quay must have been four floors of goodies. HMV and Tower also had great stores in the city. Business trips around the world where business took second call to checking out the local record shops. Spending hours on an evening at the Virgin and FNAC stores on the Champs Elysees. Getting on a tube in Tokyo and somehow finding my way to Tower Records in Shibuya (remember one time it was raining and seemed like the set of Bladerunner) and Wave in Roppingi.

Happy days indeed - but at the moment it’s the CD rack at the local Sainburys.

Have you been to The Vault in Birmingham yet? While not on the scale of HMV, Tower or Virgin on Oxford St. it is probably the biggest store within reasonable reach of my home. I often find things I cannot find anywhere else, including the internet.

We really do need a LOL button, thank you @porkyg so true about Dido albums in charity shops!

I am missing my trips into town to flip through a few thousand cd’s to find an elusive disc, or take a chance on something new. I’m lucky insofar as there are a couple of long established used record/cd shops here, and a tiny record shop in a back alley. The owners of all three are so helpful, happy to chat all day, and generous with the coffee. They all help me hunt down the very hard to find cd’s and charge reasonable prices instead of the Bays bloated prices.

The owners know so much about bands and I’ve learnt so much from them. It’s not just the rummaging for me though, it’s the connection, the relationship with like minded people. But yes, I do very much miss rummaging at the moment. The internet is such a lonely, soulless place.

Anyone remember Black Sedan Records on Oxford Road, Manchester in the early 70s. I was supposed to be a hardworking student but I spent a lot of time there…

Sounds like a place I must visit. Thanks for the heads up.

On the ocassions I visited New York - as soon as the plane landed I headed off to J&R Music - my memory is of acres of racks - just vast as far as the eye could see - well that’s the way I remember it. 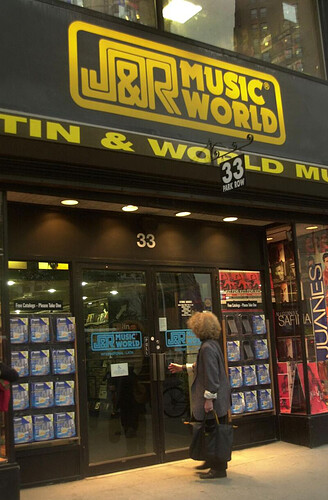 Nearer home to me was a great shop Parrott Records in Canterbury - problem was the old git behind the counter. Funny just googled it and this is comment someone made “run by a very bad tempered tubby guy” - there you go - the shops can be great but the staff! - I don’t mind capers such as in the book/film High Fidelity but just plain curmudgeonous is not on.

Finding decent 2nd cds in Aus was hard enough before covid it almost impossible now. There’s only one retailer in our region that I’m aware of and it’s still a 30 minute drive one way.

You are right about Relics, a great wee store and they have recently opened a hi fi store selling mostly Dunedin made kit, there is limited stock at the moment but with luck that will improve.
I love spending an hour or so in Penny lane when visiting Christchurch and that often lightens the wallet considerably.