I’m looking at the Gramophone subscription packages as possible Christmas presents (I can’t post links to commercial sites under forum AUP, but just google Gramophone Subscriptions Packages and you’ll see what I’m looking at). Some questions have occurred to me: 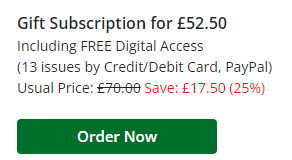 the first result in google.

Not for me, it isn’t! Not even in the top three. The only offer I get shown expired over a year ago.

It’s there for me too. It’s on Gramophone’s own website.

The digital access gives you access to all copies of the magazine including the latest edition and going back years and years. I use the iPad app and it works a treat.

it’s the old reviews and more historical articles that I’m going to have most interest in, to be honest, hence why I’m comparing those two options. Does anyone use the Reviews package and know how it compares to what’s available on the Digital Edition option?

I started buying the magazine every month while I was at University, and continued to do so for almost thirty years. It used to be a publication of record, with eminent musicologists contributing reviews of great weight and sophistication - people such as Richard Osborne, Robert Leighton, with Edward Greenfield providing the occasional (unintended) comic relief. I remember an extraordinary two-page review which greeted Carlos Kleiber’s recording of Beethoven’s Fifth Symphony, which described the release of the LP “as if Homer had come back to recite The Odyssey”.

Anyway, I gave up buying the magazine about ten years ago, as it no longer had great writers contributing great reviews. It had become (in my opinion, of course) not much more than a comic.

Of course, things may have changed, and it may be very much better again. I suggest that you buy an issue each month for six months or so, and see how you get along, before you commit yourself to an annual subscription.

I don’t have the reviews database but do have the digital edition.

As I understand it, the reviews database is a way to access all the reviews of a particular piece of music, going all the way back. Whereas the digital edition allows you to access all copies of the magazine going all the way back. They appear in the app and on eg an iPad you can read any magazine just as if it were a print copy. So finding the review of a particular album would mean knowing which month/year it released and finding it. In modern reviews, when a reviewer mentions an existing release, they usually mention the month/date too. So you can work that way.

I don’t agree with Graham’s assessment. I think Gramophone magazine is unique and excellent. Whether it’s worth the money only you can decide. But I would definitely say subscribe for a year rather than buy six copies. It won’t cost a lot more as you don’t get a discount buying copies from a newsagent!

Anyway Gramophone have a three months for £3 offer, so that’s the quick and cheap way in at the moment.

The other suggestion I have is that if you want to know more about what you get with different offers, ring their subscription department up. It’s not a massive call centre somewhere overseas. When I called them a couple of years ago to change my print subscription to a digital subscription I spoke to a very friendly and helpful woman for several minutes while she checked out that I really did know what I was asking for and I had to specifically ask her to put it on repeat subscription. Her instinct was to do it only for one year so I could see whether I “got on” with the digital edition.

Does anyone know if there is an outlet in London where I can buy a copy?

I gave an organ concert a few days ago and chatted afterwards with someone who said he had a gramophone subscription for a long time and he knew his stuff. I’m therefore interested in the magazine.

Any newsagent, including for example WHSmiths at any main railway station in London.

It’s widely available. Not a specialist buy at all.

Thanks David. I was expecting to travel to the outer rims of London - but I’ll check the kiosks nearby.

Ps, the person I met was really interesting from music point of view. He said that he had over 10k records back in the days but that he had to reduce to 500 when he moved in a care home recently. I asked about symphonies, and he responded instantly on the questions I asked.

He’s promised me a turntable, he has a few in storage.

If you go to a main railway station in London, they aren’t kiosks, they all have large selections of magazines.

If you are a member of a public library service, it’s worth checking if they offer an e-magazine service, such as Libby. You could access the digital version free of charge. (Along with many other magazines).

I continue to enjoy reading the Gramophone (and The Wire).