Has anyone tried Sorbothane hemispheres under streamers or amps?

I just bought 4 Sorbothane hemispheres for £9.

I intended to put them under a switch.

I know the definitive answer will be Try it and see - which I will do.

But just wondered whether anyone has any relevant experiences to share before I start heaving heavy kit and trying to squeeze these things under them.

For example, I’m wondering whether the heavy boxes will just crush the hemispheres?

Whether the hemispheres, which feel slightly sticky and have stuck removably to the cardboard box they came in, will make a hard to remove mess of my Naim gear?

Whether they are likely to improve sound or make it worse?

I hadn’t thought of that.

The tiny leaflet the supplier included doesn’t give any loading details.

I considered doing this some time ago but never got around to it. The sorbothane hemispheres will have a weight rating. For example, the 30mm jobbies on the river site are rated around 2kg - 4kg each so a set of 4 will support between 8kg - 16kg.

At £9 a set they are definitely worth trying…

I put sorbothane hemispheres under the glass under my 272. They replaced metal dome nuts, and in so doing removed an edginess that had been there with the nuts.

I wouldn’t have been eager to believe such things were possible, but just messed around with it as an experiment. To my surprise, the nuts made an appreciable difference, and then in turn the sorbothane blobs stayed.

I did make sure to get the correct type for the weight of the 272 though - you need to check that, otherwise they may be so squashed as to not absorb much of anything at all.

Just put some 10mm glass, cups and balls under an Atom. Replaced some sorbothane feet that were under the glass. For me, a decent improvement at not much cost.

Yes, the ones I bought are 30mm.
Made by Fonotek, which for this product is the River’s recommended brand.

Apparently, from the old forum ( see link above), @Simon-in-Suffolk was using sorbothane feet before and @Mike-B is using them with satisfaction.

Yes, thanks FR.
V useful that thread from the old Forum.
It is very dependent on the details of the application.
Whether it sucks the life out of the music or gets rid of the effects of wanted vibration is the issue.

The stuff I’ve bought seems to be of the softer type of Sorbothane.

But I think it is very sticky and might leave marks on my wooden rack shelves.

So not sure whether to wait and try it with a slab of glass?

Do you still use them?

Is the glass in a Fraim or some other rack?

So does the 272 stand directly on the glass then the glass rests on 4 Sorbothane hemispheres, and this rests on a wooden shelf?

Do you happen to know the size and the name of the maker of your discs?

I saw that Naim was showing isoacoustics ( Gaia?) under its components on a Fraimlite rack.
Of course they are more expensive vs sorbothane feet but some here are very satisfied.
Between 40 eur ( 2 graphite ) and 60 ( bronze) 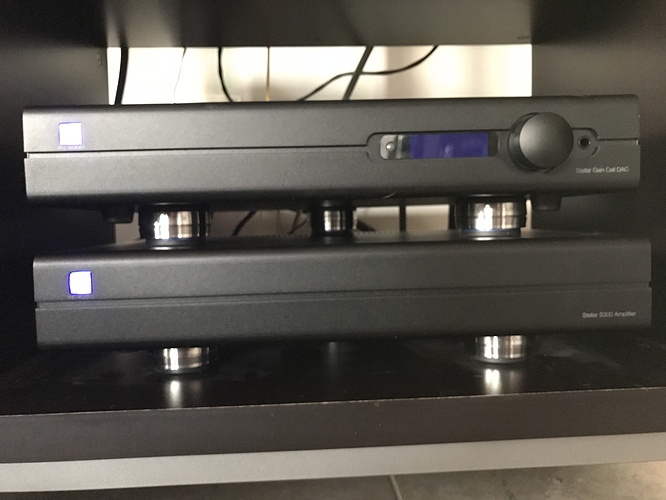 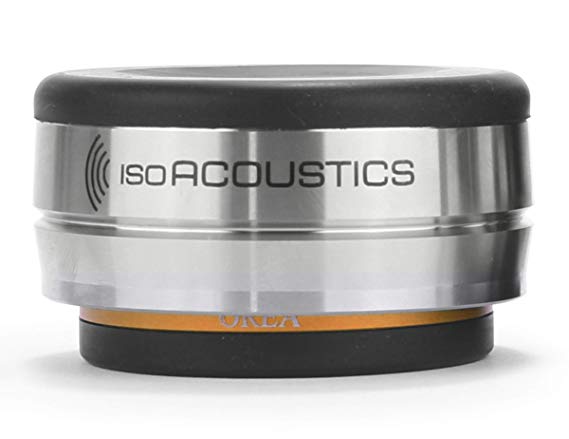 Yes, those Gaia Isoacoustics are of interest.
Also stillpoints and the Quadraspire equivalent.

But where did you see that Naim was using Gaia feet under its kit?

That’s not Naim gear in your photo!

Yes, the ones I bought are 30mm.
Made by Fonotek, which for this product is the River’s recommended brand.

The other option I considered were the 23mm AudioSerenity gel pads.

Yes, I’ve had Audioserenity get pads under my other switch for a year.

They seem to work fine there.

But then the 4 squares of carpet underlay I’m using under the new switch now also seem fine.

But under the Naim boxes there might be a more noticeable effect?

It will be interesting to see if you can hear any differences between the sorbothane domes and Audioserenity gel pads so please let us know your findings.

I don’t know if they are equivalent of Stillpoints or expensive Quadraspire. But they are much less expensive ( around 50 euros for a set of 4) and have today a very good reputation.
Some here use them with Naim components.
I have myself expensive cerabases from finite elemente and cerapucks, but don’t like their effect under Naim.
Under the rack and speakers, yes.
Amazon sells isoacoustics, so it’s very easy to return.

Well I’d like to test that.
But I glued the Audioserenity ones onto the underside of the 2960.

So to test the difference I’d have to slice them off!

But maybe I’ll do it!

I never thought of trying the Audioserenity feet under anything but the switch before.

They’re so cheap I really should buy a set of each and have a play.