Newbie here on the Naim Forum.

I recently treated myself to a Uniti Core & an NDX2, which I am very pleased with.

My question relates to the ripping and playback of 24bit CD recordings.

I appreciate the Core will not rip SACD’s but it has ripped a handful of 24bit (HDCD?) CD’s I have. I assumed that as the Core ripped the 24bit CD OK it would then play it back in 24bit but my app is telling me it is only playing in 16/44.1.

Just wondering if I am doing something wrong or it is just not possible to rip in 24bit and therefore play back in 24bit? I don’t have many HDCD’s but I won’t be purchasing anymore unless I am able to listen to them as they were intended. I don’t really want to reinstall my CD player as that negates the purchase of the NDX2.

I welcome your thoughts.

Hi Pete, I know very little about HDCD, but I think I’m right in saying that it’s 20 bit, not 24 bit, and that regular CD players that don’t support HDCD can still play them as 16 bit. So I’m guessing that the Core is similar in this respect, and is ignoring the extra 4 bits. I guess that means that you may as well just buy CDs.

I believe there is some dispute as to whether a conventional red book CD player will play HDCD with as high quality as an equivalent CD, so if it were me I would either buy a CD (or two layer SACD/CD) or a 24 bit download.

Like you I’ve only recently heard of HDCD’s but the few I have are definitely 24/96.

Here’s an example of one of them.

As you say if the Uniti Core can’t read them as 24bit then there’s no point in buying them. But this is what I’d like to know/understand. 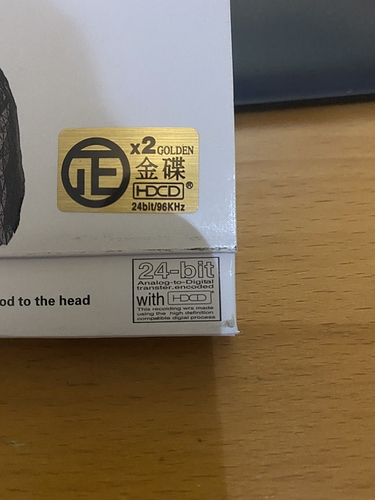 As Chris mentions earlier, the HDCD is still 16bit, but encoded so when played back on a HDCD compatible player would be the equivalent of 20bit.

Your disc looks like A Rush of Blood to the Head by Coldplay - i’d be very surprised if the labelling has any meaning to what is on the disc (was it bought on Ebay ?) - it won’t be 24/96.

Hi James - you assume correctly on both the correct album and also the place I purchased it. I was told it was a Japanese Import.
I also have a copy of the Eagle’s - Hell Freezes Over in both 16bit & 24bit but as with the ColdPlay Album it only replays in 16/44.1

All I am trying to establish is if the Uniti Core is capable of ripping a 24bit recording (assuming they do exist) & playback in 24bit. My experience is leading me to think No. And if the answer really is No then I won’t be purchasing anymore.

Hi Pete - I’m pretty sure the Naim rippers won’t ‘expand’ out genuine HDCD discs when they rip. Something like DBPoweramp will do this though. I’d avoid the Ebay discs - if you want high resolution, then the download sites (HD tracks, Hi-Res audio) would be better.

The Ebay discs are likely to be pirate copies or are of dubious provenance and even if the mastering was done at 24/96, it would still need to be downsampled to 16/44.1 for the CD copy.

Any cd when you rip will be 16/44 HD you need to downloads from sites.

An earlier generation of Naim CD players, such as the CDX2, used the Pacific Microsonics HDCD chip and could decode the additional information. The technology was developed in the mid-90s by Keith Johnson of Reference Recordings to bring the resolution to 20 bits by “hiding” additional information in the dithering. In an age of high-resolution files, this would appear to be an obsolete technology.

By the way, if you have a number of SACDs and want to get the DSD information, there is a way to do it if you have the right Blu-ray player. Do a search for ISO2DSD or SACD_extract to check this out or see the thread that I started elsewhere on the forum for more info about potential problems. Problems playing back long DSD rips with Naim app and NDS

We had the HDCD encoder box in a mastering studio I used, We dusted it off and tried it but it really belonged in the past. It made normal playback worse.

If I remember it HDCD was a kind of gain riding scheme. Low level parts of music was raised before and lowered again on playback. With control bits embedded in the music bits. There was some kind of special limiter involved also. No magic.

The Core will rip CD only. However a rip of an HDCD should still contain the HDCD encoding. So you would either need a DAC with HDCD decoding or else rip the disc on a computer using dbpoweramp and their HDCD plug-in, which then gives a 24bit file with the HDCD effectively pre-decoded.

All my HDCD files show as 16 bit on NDX (display) & Naim iOS app played from Asset UPnP on Synology NAS.
Hover over a track data file line & it shows 24 bit.
HDCD is a coding filter that encodes 20 bits of data in a 16 bit file.
Problem is I don’t believe players or other software will show anything other than 16 or 24 bit.

Good question, HDCD is encoded as 44.1/16. HDCD works by using special signals inserted into the least significant bits that tell the HDCD DSP to change dynamic range amongst other functions in the following passage of samples until additional control signals switches off or adjusts the HDCD processing, until possibly enabled again for another passage of samples … this has the effect of companding the reconstructed analogue signal, kind of simulating an overall greater higher definition than 16 bits would ordinarily allow.

Now when you rip a HDCD, you will be likely to play the rip through a DAC that doesn’t understand the HDCD control signals. Therefore some rippers simulate the HDCD DSP and expand the 16 bits into approximately 19 bit samples so they can be played back by any DAC.
Now standard sample sizes include 16 and 24 bits…(and these are supported by WAV and SPDIF) … so 24 bits is chosen as the most appropriate sample size, despite not all 24 bits being used. This is why HDCD rips that use a HDCD DSP simulator appear as 44.1/24 rips.

Just wanted to thank everyone for their comments & contributions. It’s been an education.

After doing some more reading I didn’t appreciate HDCD is kind of old hat now. Having not bought any CD’s for a good few years I got excited when I saw some CD’s claiming to be in 24 bit thinking my new NDX2 would be able to maximise their potential but it appears its not capable of doing so - so I’ll stick to trying to find higher quality files from the streaming sites that are now available.

Thanks again to all.

You could do worse than to try a Qobuz subscription. Plenty of 24 bit material available, and now that they’ve dropped the price it’s a pretty good deal.

I may well do as I’m not that impressed with Tidals’s offerings. I’ll continue to use it while I’m on the free 3 month trial.

The streaming providers do offer one thing though - convenience. Maybe I need to get my head around not owning music from now on. Its taken me 6 years to get a streamer and ditch the CD player but I do regret purchasing a lot of music via iTunes which is at best 256 which was and still is OK for the car but they sound awful through the NDX2.

FWIW - I used TIDAL HiFi for two and half years and switched gave Qobus a trail when it came availble in the US. At the end of the 30 day trial, I cancelled TIDAL and when with Qobus. Quality of the music was improved and it was $5.00 cheaper per month.

You may want to trial the Qobus for free during your last month of the free service with TIDAL to do some side by side comparisons.