This may be a daft thought but is it worth changing a Headline/HiCap for an Atom Headphone Edition?

I currently listen quite a lot to headphones - Focal Celestee (to allow Mrs L TV time) & have to run a 4m cable from the Headline to my seat, meaning volume control is awkward!
I’m also not convinced I’m getting the best out of the Focals in this arrangement & thought a dedicated Headphone amp may be the answer. The Atom HE could sit beside me, easy to reach & control.

Would the Atom HE be better than my existing setup?

The OP has an NDX so I’m assuming has a music collection ripped to NAS and perhaps uses streaming services too. The Atom HE could access the same music collection and services and potentially sound better than the NDX / Headline setup. It’s also a neat stand alone solution (just needing Ethernet / Wi-Fi and mains) and doesn’t need to be close to the existing system.

I have listened to quite some headphones using the Atom HE at my dealer and for budgetary reasons I got the Atom HE and Meze Classics. It my funds were larger, I would have bought the Celestees. It’s a very good pairing and it was a recognition for me, because that’s how I like music.

Bass, but not too much. Fast, nice timbre. Kind of airy too.

I’d go for it. The Atom HE is fantastic and versatile product. Add an amp ans loudspeakers and you have a full system.

It is indeed. But I feel it’s the weak link in my system. And the volume control, as petty as it sounds, is a pain when its 4m away!

Exactly. I use Qobuz primarily along with a NAS. All through Roon - via a Raspberry Pi

Thanks @Ardbeg10y that helps greatly.

The Atom HE would be more versatile and convenient. Would it sound better? I’m not sure. I’ve had a Headline with HiCap and then Supercap from a 500 system and suspect the latter was s fair bit better than the Atom though there are several years between them.

Another potential option could be a longer interconnect to your source and set the Headline right next to your sitting position.

One issue here is that most (not all) high end headphone amps still have no remote volume control.

I’d be inclined to keep the source unchanged and play around with placement. Naim can fit a longer lead on the headline and slug with a resistor it if needed so it won’t make the preamp unstable. A HL2/HCdr is a really formidable headphone amp. A suspect an Atom might be a step back on several fronts.

That said, there are non Naim solutions that are purely analogue headphone amps that are even better than the HL2/HCdr combo. If, you can bear a non Naim bit of kit, you might find something that just knocks your socks off. I have the same source and headphone amp as you in storage. I thought it was end game for headphone enjoyment. Then I tried something else and, quite frankly, the HL2 will never see the light of day again.

To be honest, headphones in general are a compromise compared to the “full” system & probably always would be.
I have toyed with the idea of a SC on the Headline - I could actually try it by borrowing the SC on the SNAXO - but it still leaves me with the 4m cable & volume control awkwardness & finding somewhere to put an additional SC!
I know - 1st world problems

Unfortunately, that’s not really an option. The system is positioned between two doors & with solid wood flooring nowhere to route cables.

Yes, I have looked at other non-Naim options but again I’m left with the positioning of the system

Well, I would suggest either one of the rare remote operated analogue only headphone amps (I use one). Another alternative (and I actually do this despite having remote control), is to place a nice chair close to the hi-fi.

I quite like the second option. There is the sofa for listening to speakers. But next to the hi-fi, there is a nice chair and a stand lamp for reading right next to where the headphones are. I even put an ottoman there so I can retreat to my headphones corner and read music reviews when the house is asleep,

I think the options on the table aren’t going to change for you:

Ultimately, you may not like any of those, but you’ll have to pick one regardless.

I have an Atom H. E. too. It works well with Focal headphones. I don’t know if it would have a better sound quality to your Headline. I bought it to get the streaming solutions as it is a versatile streamer.
There are lots of headphone amplifiers: Beyerdynamic, Lindemann, Graham Slee, Rupert Neve…
I also considered an Astell and Kern portable high res player with suitable ear/ headphones. I don’t currently have a system with speakers, so I’m in a different situation.

I guess the question could also be is the Atom HP Edition equivalent to a £1k stand alone HP amp from x manufacturer. If so then maybe a solution would be to look for a headphone amp only. With that logic of you spend the Atom budget on a HP amp you will end up with something even better. Is the long cable an issue?

Anyone tried an Atom HP through a 500 system? Any improvement vs stand alone? This could also be useful info.

For clarity this is what the room looks like… 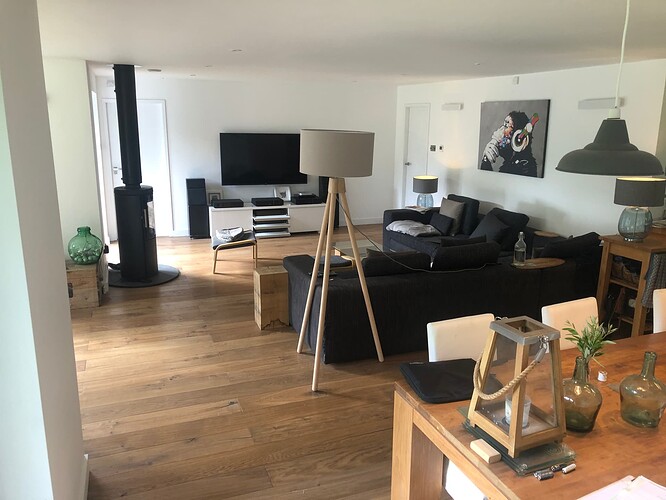 As you can see there are doors to both sides of the hifi & nowhere to place a “headphone seat” permanently.

My “listening seat” is the corner of the sofa, beneath the tripod lamp.
All the black boxes are now housed in the white unit between the SBLs (slightly old photo) & the Headline sits on the top next to the 52.

I therefore have to run a cable from the white unit to the sofa. Its not a big issue but I get the impression that the Focals could sound better.

So when I started looking at alternatives to the Headline there aren’t many that are just headphone amps. The trend seems to be towards amp + dac - which I don’t need if connected to the system.
Then it struck me that for a similar price I could get the Atom HE & place it next to me.

But the niggle is then does it sound worse than my current setup?

I suppose its off to the dealers & have a listen. Not an easy one to compare though.

I suppose its off to the dealers & have a listen. Not an easy one to compare though.

Make sure the dealer unit is well run in and take your headphones with you, would be my advice.

The big plus for me about the HE is that you can pick it up and take it away and listen wherever you like with Wi-Fi: in the bedroom, in the spare room, on holiday etc.

I replaced my Headline/Supercap with a Violectric HPA V281FE.
In my opinion it is miles ahead of the Headline/Supercap. I was frankly a bit shocked by the difference.
I have an Atom HE which I use in my cabin. And although it is a very fine piece of gear, it can not compare to my regular setup at home (552/ND555 etc). Which is a good thing and to be expected, since there is a huge price difference. And the box count is a bit different too.

Definitely another shout for Violectic, i also have a 281 and went from a headline maxed out, so much better in all area’s.
Plus the Violectic range has remotes and many options to suit, so Definitely worth a look