I’m away from home this weekend so to keep up my musical fix I am listening to Tidal via my mobile phone and really cheap headphones. This has got me thinking about a better solution so I’m wondering what a cheap Windows 10 laptop with a Dragonfly Red or similar dac and a decent set of headphones would sound like.

Does anybody use a similar setup or can suggest an alternative? Tidal (HiFi) would be the primary source.

There’s another current thread about the Dragonfly Red. It is brilliant and amazing value. Very good DAC apparently and plenty of umph to drive good headphones. You can also drive it from an iPhone or iPad with the necessary adaptor. Possible also from Android phones, I don’t know.

I thought of using a Windows 10 laptop because you can stream Tidal Masters but it appears the Dragonfly Red cannot make use of the higher res files.

I think you may be mistaken there. I see from a quick google just now that both Android and IOS Tidal apps can do the first MQA unfold and the Dragonfly Red (or the current Black) can do the rest of the decoding. So I think a phone, a Dragonfly Red and a pair of headphones would let you listen to Tidal Masters.
Best

I use dragonfly red + a pair of T20 RSA IEMs during business trips … either on my W10 laptop (with foobar or tidal or qobuz apps as player) or on my iPhone (with a lighting -> USB adapter between the iPhone and the Dragonfly).

I don’t care about MQA when “mobile” - in fact I find my mp3 320 copies of all my music perfectly adequate, if not indistinguishable from uncompressed FLAC 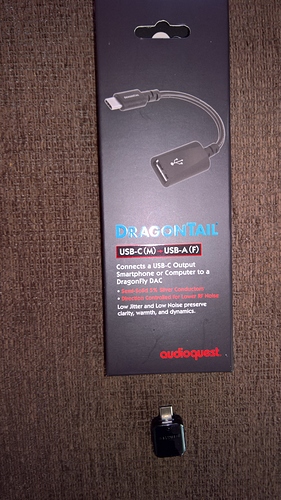 Hifi-dog,…Mojo is great,…but much,much larger than the Dragonfly Red or Black.

If you have a good battery in your phone,…I do not think there is a problem.
You can then play many hours with a Dragonfly Red.

I have to use Apple camera kit and as headphones are for home listening I use an atlas usb cable (0.5m) into the mojo… phone n mojo sit on my desk while working…

If you have the laptop and don’t need a pocket sized solution, the Dragonfly is a good option. It also works well with phones, but on the end of the connection cable, does not sit easily in your pocket, and using the phone as a player eats battery and storage. I prefer my portable Sony player for that.

Thanks for the replies so far gents. I hardly ever listen to music on my mobile so right now I don’t need a “pocket sized” solution. Powering a USB DAC won’t be an issue on a laptop so it could be something other than a Dragonfly.

If small size isn’t a requirement, there are a multitude of USB DACs out there, either bus powered or mains powered. I think a Dragonfly is still a good option for the price, but depending on your budget, there are plenty to choose from.

Thinking about the way I want to use the headphones I may well be better off with a mains powered external headphone amp/dac which could be used on the main system or with the laptop if I want to use it in another room or away from home.