Hi Everyone!
Please help me to identify this antique NAIM remote - it seems for CD player but which?
It has only following btns: STOP/PLAY/PREV/NEXT/<</>>/PAUSE/DISP/PROG/RPT/[nums 1-0]
Please inform me about the model name or NAIM component model name+year it for.
Thanks! 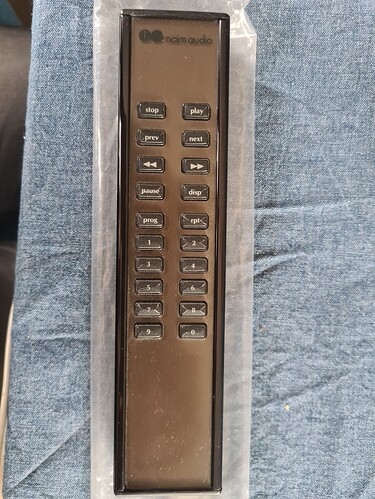 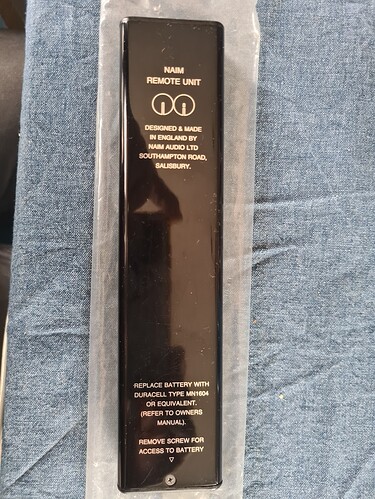 It’s the remote that originally came with the CDS - Naim’s first CD player.

Thanks, Richard!
Just googled “CDS” (w/o numbers) and found 1 picture with CD player togeither with this remote. This is it.
Thanks again!

It’s a good looking RC and (unlike all previous Naim handsets, which were rebadged Philips (?) units) looks as if it was designed in-house by Naim.

Of course, it pales into insignificance when compared to Naim’s next RC, the mighty Flash, which was introduced as the NAC52 and CDS II came out. I still treasure my Flash, although it was withdrawn when it was disclosed that the shell was made from depleted uranium - OK, not depleted uranium, but something bad.

My Flash is getting a bit cranky, so I’ll have to ask Audio T if it can go back to Salisbury for some TLC.

The Flash was a sad casualty of the ROHS directive; IIRC it used a mercury switch so it would come to life when you picked it up. Rather than redesign it, the R-Com was developed instead.

If your Flash required a new PIC chip then you may be out of luck; my own Flash had a development PIC chip installed when I was testing out the new AV functions that were added. However, there were some oddities on some of the pages so a few years back I asked if I could have a production chip installed, but was told they were all gone.

I thought that the Flash was a great bit of kit. Unfortunately the screen on mine ‘bled’ a long time ago and is no longer useable. I could not throw it away so I keep it in a cupboard as a design icon

If it’s ‘’ cranky’’ I ended up with several Naim remotes from the period of the Nait 3, CD3 and CDX2 , they were all interchangeable . Sadly time caught up with them .

I only have the CDX2 now , but I bought a remote from Amazon for my CDX 2 on the basis of a generic remote for a Phillips CD player. It also controls volume etc

Hope you are continuing to improve

You should keep it by the front door, so that you can use it to knock out any burglars who try to break into your home.

If you hand a Flash remote to an unsuspecting person, be careful as they are liable to drop it due to its weight.
I am on my second one as the first just stopped working. When/if this one packs up thats it as repairs are no longer possible as in the comments above.