So Ladies and Gents, what is all this about

“Hi-Res Audio is dedicated to audio files that deliver sound with a quality superior to that of a CD. These files are encoded with 24-Bit resolution (as opposed to 16-Bit for CD quality). This is also called studio quality because 24-Bit resolution is used in a recording studio. The difference in richness of sound and feeling is very substantial compared to MP3 files or even CD quality.”

So are they saying they get the 24-bit version at Studio time somehow ? before CD created… Or can you buy a CD and make your own 24-bit version…

The former. Probably recorded at 24 bit but then needs to be downgraded to 16 to put on cd.

The former… once you have decimated (reduce the sample word size) down to 16 bits from 24 bits you will removed information. Once removed you can’t add back on simply by increasing the sample word size.
Think a sample value represented in 24 bit like 6.978986… it gets turned to 16 bit so looks like 6.98… if you then turn back to 24 bit it might look like 6.980000 … but the least significant values will have been discarded and can’t be magically recovered.

Most music for some years now has been recorded in 24 bit, and 176.4 or 192 KHz or sometimes higher sampling frequencies. So the best you can get is a straight copy of that original - which of course is dead easy to do, and the vast majority of hifi quality players can play such files direct.

You can buy in that form from some websites such as HiRes Audio, Qobuz and others. And you can stream the same online from some, though more challenging than playing from your own store of downloaded music.

Tidal offer something a bit different, the hi res compressed by a technique called MQA, apparently including certain filter information obtained from the recording studio that can tailor the output of a suitable DAC supposedly to provide the exact mirror image, though of cours ethe quality depends on other DAC characteristics. However only MQA-enabled DACs can “unfold” back to the high res with the filter info, and IIUC the compression is lossy so the result is not a bitperfect copy, and there apparently can be audible artefacts - however I am sure others can be more definitive if you want to know more.

I gather that unscrupulous people have upsampled from low res sources to sell as hi res - which whilst not necessarily worse than the low res is certainly not the same as playing true hi res. These are generally to be avoided, but shouldn’t crop up on legitimate sites.

You can also get hi res files ripped from vinyl: if the vinyl was recorded fully analogue, as was the case many decades ago, and the disk pristine and done with good equipment that may produce an excellent hi res copy of the vinyl, though of course preserving the vinyl characteristics.

Whether hi res actually sounds better is a different question - and likely depends on the music and recording technique etc - provided 16/44 is simply downsampled from the same hi res file (i.e. not via different mastering, which does occur), the hi res should certainly be no worse and at least some recordings can sound better especially on good gear. The 2L.no website has samples available at a variety of resolutions all derived from the same original masters mostly recorded at 24/352.8 for anyone wanting to investigate further how different resolutions compare - including MQA processed. 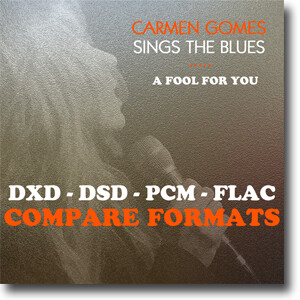 These files are are excellent for comparing formats;

When you compare different sample rates always start with the lowest resolution.
During listening don’t focus too much, hearing is as individual as taste but hearing is also something which can be acquired, like the taste of good wine.

When you compare different sample rates always start with the lowest resolution.
During listening don’t focus too much, hearing is as individual as taste but hearing is also something which can be acquired, like the taste of good wine.

You can choose from the following formats:

Thank you for all the information, very interesting.

I have listened to Qubox Hi Res, Roon CD’s ripped Apple Lossless and Spotify (Streaming - Very High and Download the same) on my Naim Muso’s (cabled) and Mission / Amp combo and all I can say is that in most if not all cases, if I then play the same track via Spotify, the HiRes version sounds much more involved, brighter, and with notes and sounds I hadn’t heard before.
Going back to the Spotift version sounds dull.
Spotify will be confined to the Car - non Hi-Fi situations, if not available on Qubox (and for other reasons I have to keep Spotify anyway)

Another point, as an aside and oft mentioned here, Spotify still suffers from Drop out, pauses, after extensive testing and Spotify tech support. No major drama but annoying.
Usinf Roon/Quboz, not one drop out. Very solid and I love the Roon front end, not sole on Quboz but will keep trying as it’s new (to me)

I’m not sure what resolution Spotify is?
I only know their free version, which I use to investigate suggestions for new music. It is poorer quality than their subscription service, but I find it good enough to decide if I like something which is my only use for it.

I’m not sure what resolution Spotify is?

320kbps is max, but you have select that in settings as its not the default

320kbps is max, but you have select that in settings as its not the default

Listening to this album from 1971.

So it had no original bit rate and sampling frequency.

So is this 24/96 digital file a copy made from the analog master tapes - or from a later analog or digital copy? 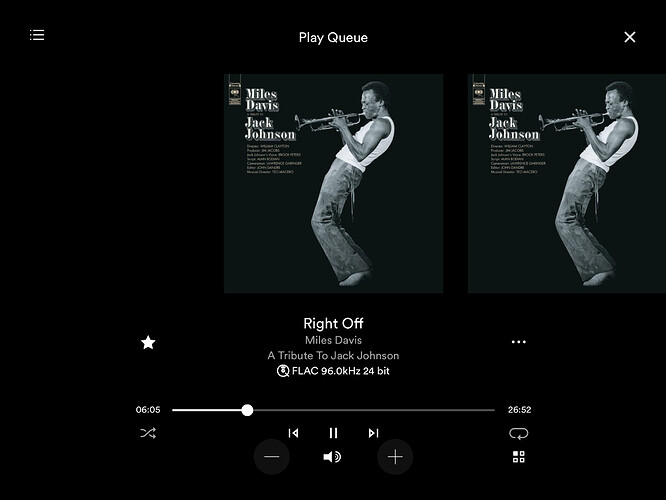 I will listen later. I suspect the publisher / distributor made the digital copies at 96/24 and then distribute via relevant channels.