The boredom of lockdown and the desire to avoid doing real work have led me to get something that I’d been meaning to do for years properly sorted. And I think I’ve just done it.

The original six radio episodes of Douglas Adams’ The Hitchhiker’s Guide to the Galaxy used a wide variety of music, mostly as background to the Book’s narrations. Some of this music I recognised as a young boy because I was already familiar with it, but most was unknown to me. Thanks to the book of the script, Spotify and my own ears (not to say overwhelming desire to get everything nailed down, to the second where possible) I’ve now got a spreadsheet of all the relevant sections, timings, album and track used. I won’t appal you with the full thing here, but here’s a summary in case a) you’re interested, b) you want to know what Douglas Adams was listening to in the 70s or c) you want to discover some slightly unusual music:

The theme music was, as many of you may know, Journey of the Sorcerer from the Eagles’ One of These Nights. Each episode started with the section from 1:02 into the first ‘chorus’, whilst the closing credits were spoken over the banjo section from 1:38 into the 12/8 version of the ‘chorus’.

First episode
A Rainbow in Curved Air by Terry Riley (also used quite a lot in other episodes)
Lontano by Ligeti (probably the 1970 release on Heliodor/WERGO, since it seems to be the only release that would have been available in 1977).
Volumina by Ligeti (one of the horrifically doom-laden organ chords was used for the Vogon captain requesting poetical analysis)

Third episode
Katakomben from Einstieg by Between
Space and Space Requiem from Go by Stomu Yamashta
Oxygene parts 1 and 5 by Jean-Michel Jarre
Kyrie from Ligeti’s Requiem
Shine On, you Crazy Diamond from… well, you know (used in the ‘deleted scene’ where they first walk on Magrathea - you can even hear the crackle on the vinyl)

Sixth episode
Volumina by Ligeti
Volkstanz from Einstieg by Between
and, of course, What a Wonderful World by Louis Armstrong

There are a couple of places where I’m certain the script book (and wikipedia, which quotes from it) are wrong, but I won’t bore you to tears with the details… unless anyone asks, of course.

It’s been a peculiar sort of slightly masochistic fun doing this, and discovering some new music along the way. If you enjoy exploring the list above similarly, do say so.

Well done, Mark. This makes for an excellent playlist on Tidal – although two or three pieces aren’t available.

Indeed, some of them are a bit obscure. Spotify doesn’t have Go by Yamashta, which slightly surprises me because it’s not that unheard-of (I don’t think - I was only two when it was first released).

Watch out for Volumina though - it’s like the organ equivalent of dark ambient and could quite easily be used to soundtrack some sort of gathering apocalypse. Not the cheeriest of listens, especially at the moment. 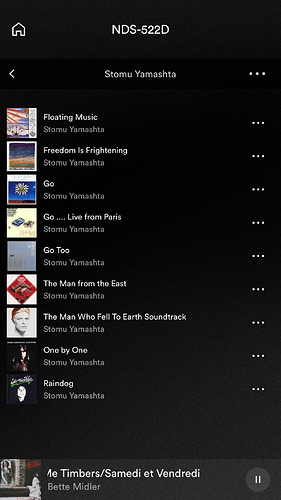 Thanks for the reminder, on my play list. Never heard it through a decent audio system, usually on headphones or in the car.

Thanks for this, tried making my first playlist in Qobuz.

Not all the tracks there but I think I got most.