We had two Starlings come down the chimney this morning apparently. My partner found them after returning from her morning run. I had been away for the night so go all this in a text. Apparently they made a serious mess all over my TV as they were perched on it when she went in to the room and some on the loan speakers I currently have.

Thankfully she was calm and reacted instantly. Opening a window the birds apparently flew straight out. Then she cleaned up the mess. Thankfully no harm done, could have been worse of they managed to hit the cones.

Not something I would expect in London area. But hey stuff happens.

I had a wood pigeon stuck in the chimney earlier this year. I could hear it scratching about somewhere up there on a ledge. So went to the garden centre bought some netting and covered the fireplace.

Netting must have fallen down ‘cause when I came back in the room the pigeon was sitting bold as brass on the hearth rug. Quickly scrambled round for the key to the French windows and it flew out - luckily no mess but could have been a disaster.

Several years ago the nextdoor neighbours had a couple of starlings stuck in the chimney breast of a upstairs bedroom they ended up having to get a builder in and make a hole in the wall to get them out.

Some years ago I opened my door in order to go in town.
I saw that in the stairs. Couldn’t go out. I called the firefighters, but they didn’t believe me. I had to call them 3 times . They thought i was joking. 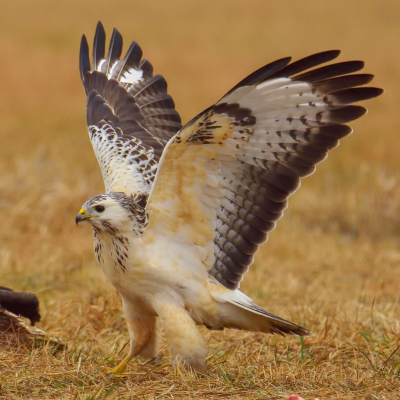 Just imagine if had been a bison. The mess!

We have jackdaws that often try to get into the chimney pots to nest. Cowls fixed on top of the pots keep them out, although that doesn’t stop them from trying.

Shortly after moving here I got up one morning, lwalked into the spare room we use as a dressing room and saw a rather large owl looking down at me. It could only have come down the chimney ( we had a large open fire). I opened a window and in its own time wandered over and flew out.

Two mornings later it was there again. This despite the two dogs sleeping in the room downstairs.

I then put a mesh over the top of the chimney. Of course if it tries now it will end up trapped in the wood burner.

We had four bats in the kitchen sink one morning last winter. Huddling under the sink bowl. The window above them was slightly open but still pretty odd! They were liberated safely.

We have had a large toad on the cellar steps. No idea how he got there.

We also had a vole appear through a crack in the floorboards of the dining room and wander across the floor. Happened several times over a number of months despite being easy to catch and put outside. Maybe it was the rest of the family. Quite cute really.

This little guy tried to get in the cabin … not really a big deal since a cub is easy to wrestle but I’m sure the momma bear is close by and they are a little harder. 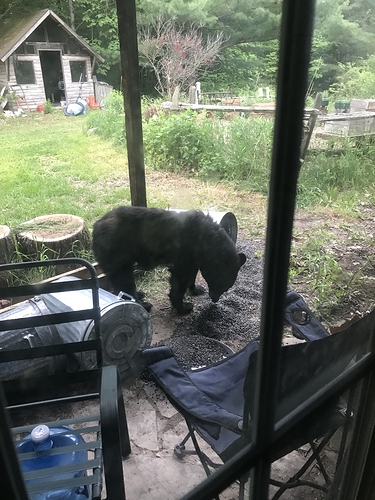 Wow, you in Canada by any chance?

Late one Saturday night, watching the boxing with a few glasses of wine inside, a buzzing sound caught my attention, looked up and there was a big hornet in the sitting room.
Even with a few glasses inside me I knew that fly spray was NOT a good idea, rather moth -like it was attracted to the sitting room light and buzzing quite angrily
Being quite short I had to get a small stool to stand on and eventually slid it into a glass jar with a plate.
Opened the back door , took glass and plate outside and released it.
The bugger flew straight back indoors and I had to do it all over again.
Sobered up very quickly …

Don’t want to aggrevate a Hornet, grumpy buggers at best of times.

Saw some when we are out and about at London Wetlands Centre on Monday. Huge things we gave them a wide berth.

Hornets live around here and in the next month or so as the weather cools they look to come inside in the evening. As mentioned thay are just like moths in that they are attracted to light. When 2 or 3 are knocking at the window of a late september evening, it gets all a bit The Birds. Fortunately the hornets here are pretty amiable and wander in and then wander out again if left alone. Supposedly their sting is less painful than a wasp, but I don’t intend to find out.

I once checked into a hotel in India, the guy who showed me to my room switched on the light and opened the window. I left the room to find some food, and returned maybe an hour later to find that the light, a long fluorescent strip, seemed to be off. In the darkness, it took me a little while to realise that the light was in fact still on, but the room was pitch dark as there were thousands of moths huddled round the fitting, completely obscuring it.
I guess that might have happened in the UK before we started using pesticides.

Stopping at a lodge in Namibia , woke up wanting a pee.

Through the moonlight I could see something about nine inches long and slender on the floor. I wasn’t getting out of bed for any reason at all.

Eventually went back to sleep , woke up to find that the floor had paintings on it and I had spent the night terrified of a painting

We’ve had possums, frogs, snakes, lizards, birds and spiders. This guy came out from under our lounge one Easter weekend. 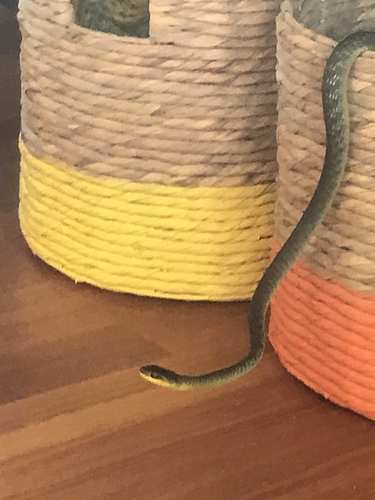 Urggh. I am so happy to live in a county where the wildlife won’t kill you unless you have an allergic reaction to bites and stings.