What is your preferred brine / pickling liquor, and main ingredient?

I tried making my own pickles several times over the years; most attempts were failures, but yesterday I had a positive result with pickled cucumbers. The variables are many but yesterday’s result was based on:
Vinegar: mixture of Oarkney’s malt with white wine vinegar
Spices: mustard seed, sliced ginger and chillies, star anise
White sugar and water.

For pickled onions i place the skinned onions in a bowl and cover with large amounts of salt for 24 hours. This dehydrates the onions. A quick rinse, then put in kilner jars with Shwarz pickling spices and pickling vinegar. The vinegar then penetrates the onions better than if a salt solution is used to dehydrate. They should last until the next pickling season.

Pickles are tough. My mother (a good cook) never was happy with hers and she tried several times.

How long do they take? And do you do them in a crock? Sealed or loose lid?

Star anise is great, and has anti-viral properties and benefits.

Indeed … I like the idea of a crock. I saw one for making vinegar that sparked my recent pickling experiment.

My maternal grandmother was a great cook, and I remember cupboards full of pickles in the 70’s. Wish I’d learned how she made them, especially the crisp pickled red cabbage and her excellent piccalilli.

Dad used to do the family pickles. I don’t think it’s possible to repeat, it was a large scale operation over many days, sacks of veg and a five gallon drum of “real” vinegar, which I think meant it was made from beer. Everything came from the covered market in the centre of Bristol. It was boiled with spices on Friday night whilst the onions were trimmed and skinned, that night and the next day. They filled sweet jars, the big ones from the local shop. Once the onions were done, we moved to beetroot, then picallili. Grandmother did walnuts, she was the only person who liked them.
Those were the days when we had supper, real cheese with rind, proper bread and butter, with pickles. Tuesday night was camera club, my uncle always said that the only reason he was allowed out was because he smelt of pickled onion so my aunt knew where he had been.

I’ve found with pickles to cut back on the salt and sugars works better -allowing the salts and sugars in the vinegars to do their thing seems to be successful. Especially with apple cider vinegar that naturally has more sugar than salt. To be fair I think salt should be brought down to a minimum with pickles -only using it for flavour (fermented salts like anchovies).
My mum would always boil what was pickled in the pickle broth before storing.
I prefer to lightly heat the broth to get all the flavours mingling. Pour steaming hot water over what you want to pickle to kill off nasty bacteria. Same with the containers.
Let them mingle at room temperature for 36 hours to start a fermentation then in the fridge for up to 10-12 months.

Those were the days when we had supper, real cheese with rind, proper bread and butter, with pickles.

What a timely reminder of the joys of the simple things. Until I made the pickle this week I was of the school of thought that said: let the natural taste shine through - don’t mess it up with pickles. But the cucumber pickle added something to the Montgomery cheddar - and it had rind.

PS I used to eat cheese rind, now my dog has it as a treat. He was brought up on a dairy farm that also had a neat line in cheese, Brinkworth if anyone else knows it.

I’ve found with pickles to cut back on the salt and sugars works better -allowing the salts and sugars in the vinegars to do their thing seems to be successful. Especially with apple cider vinegar that naturally has more sugar than salt.

This is good to know as I have a lot of local cider vinegar that I would like to use in pickles. Great tip about reducing sugar too.

I just completed 2 jars. One jar was a cold pickle, the other was with the brine brought to 190 degrees then poured into the jar.

Spices - peppercorn, salt, garlic cloves, red pepper flakes, onion slices, a Korean pepper from my neighbors who are, Korean, and gave us the pickles, and that’s it. 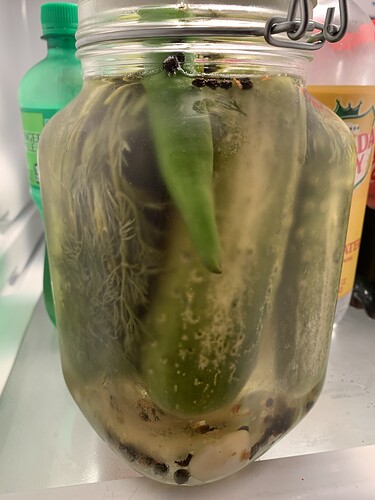 Ahhh. One of my many small pleasures in life. 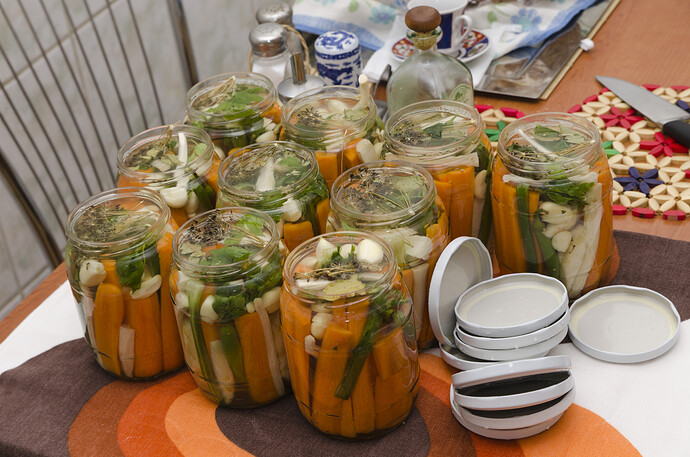 The mention of brine as well as pickling at the OP got me inspired.
With meat I haven’t really considered brining as such, as I always thought I’m more a marinating guy. Although after some research there’s not a lot of difference it seems. 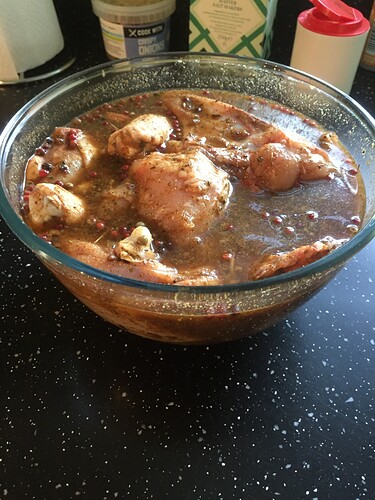 So here I have a chicken cut into 8ths in a brine inspired by the deep fried American brand.
Heavy on the pepper as well as the salt - with of course the secret blend of spices and herbs - with a good pinch of bicarbonate soda to sit in the fridge overnight.