Sorry this is a really boring Q.

I need to get a PC/screen/keyboard for general home use - mainly by kids doing homework, perhaps playing Fortnite as the most hungry app.

I know nothing about the PC market.

Just need a reliable machine that won’t slush out too fast and gives maximum computing power per £.

Should I just get a screen that has a CPU embedded?

Do brands matter, or are Lenovo, Dell and HP effectively the same?

Is there a smart way to buy SH, or is that a false economy because they kill the older machines with SW updates?

Brands largely don’t matter bar maybe screens. Certainly wouldn’t go for SSD given your budget. Avoid laptops in terms of upgradability. You need a desktop. Go for the fastest CPU and most powerful graphics card you can afford. If you’re not sure where you’re going with this then avoid PC World etc. as they’ll sell you a dog. Best bet is to go to a local shop; give them your budget and ask them for a spec. Come back here if you want to check out the balance/legitimacy of their proposal. I can build my own in 15/20 minutes given a budget/spec. but local shops essentially can do the same thing.

Checkout a company called ITC Sales. They sell end of line and factory refurbished computers. If you don’t mind the odd mark then they are excellent value . I have used them for years, having a small side line computer consultancy business.

For example they have some Dell Optiplex 7040’s at the moment that would be ideal. i5 processor, 8 gigs of ram and a 256gb SSD for £276. You will need to choose a monitor. I have found Dell, LG and Samsung good.

Thanks Mike
Very useful pointers, and good of you to offer to check spec.
Jim

Thanks Dickie
Good tip, am looking into it now.
Cheers
Jim

I would certainly go for an SSD though, really should avoid spinning disks and SSD’s are cheap nowadays.

I agree, I’d actually drop down a processor range to get an SSD within budget as the performance improvement is so large.

I too have built most of my own PCs and those of family members as well.

I agree with Mike that while brand names may have mattered in the past, they certainly don’t to the same extent these days. I would disagree in one aspect with Mike’s advice in that if you were to have a PC built for you then I would consider an SSD drive for the operating system and maybe one or two apps along with a conventional hard drive for everything else. Once you have experienced the sheer speed of an SSD drive for boot up and the like, it’s very difficult to go back tto a conventional drive, and SSD drives are relatively cheap nowadays.

Buy the best monitor you can find within your budget, and for what your use of the PC is likely to be. This is in my opinion more important than your choice of CPU or graphics card.

My personal preference would probably be for a desktop rather than a laptop - bigger screen is the main reason.

I would personally not buy a PC 2nd hand, although the potential refurbished purchase recommended by Trickydickie sounds to be fairly safe.

I am afraid the advice I have given you will probably blow your £500 budget. One good reason for purchasing a ready built PC from the likes of Lenovo, Dell or HP is that they will all come with Windows 10 pre-installed. If you get a local shop to build a PC for you then you will have to factor in the additional cost of the Windows 10 operating system.

If you do decide to go to a store such as PC World, then try out each alternative option in your price range - concentrate on the quality of the screen and the general feel of the device. SSD a definite bonus, but check that you have sufficient storage space (or the ability to add another drive in the future). 6 Gb of RAM a definite minimum for reasonable performance with Windows 10. Preferably an Intel i5 or AMD equivalent CPU if you can get this within your price range, but you may have to make do with an Intel i3 or equivalent in your price range. At this sort of price you are likely to have to make do with graphics embedded in the CPU. This may be fine for your current needs, and you could potentially upgrade by adding a separate graphics card in the future.

We have used HP Pavilion mini tower/desktop PCs for general purpose - they are relatively cheap, easy to buy, well specified, reliable and good driver support - and product support should you need it… the last two is where perhaps ‘brand’ comes in.
Yes they don’t look super sexy, or space agey - but they work well.

Lenovo is another good make - very reliable - but only experience with their laptops.

I wouldn’t worry about so much about upgradability now - its not like it was say 10 years ago - when every month it was like things were going out of date - hardware has more settled down now - and a lot of the innovation is in the cloud and software. A good mid spec PC should last 5 to 8 years plus I’d say.

There are new Intel Core pc’s on Amazon from budget brands like Shinobee, that should be sufficient for the tasks described. As an example: 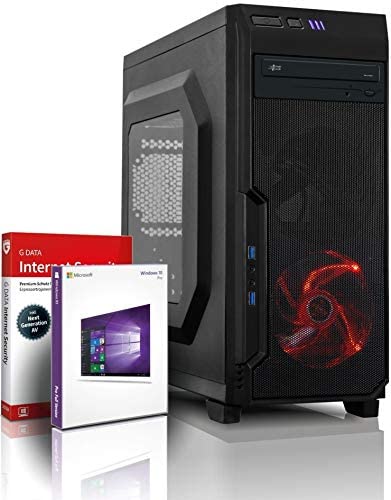 I understand the logic for SSD and they are indeed a joy but they’re not that cheap and the above spec is a good example of where such things go wrong. A 256GB SSD would be pretty limited nowadays. For any price of PC you should be looking at 1TB minimum. The other advantage of HDD over SSD within the specified price is that you ought to be looking at two HDs. One for the OS and user profiles and one for documents etc. as well as a cheap external for backup.

I know this will be anathema to everyone who cares about computers, but my current PC is a Packard Bell that I picked up in PC World a few years ago (4?, maybe 5…)

i5 CPU, 8GB ram, ½GB spinny HDD, built-in graphics. It came with W8 but since upgraded to 10 in line with the rest of the world, and I then added an SSD for the OS and core apps, using the old HDD for other apps and also My Docs / My Pics / My Music etc & storage. It makes it easier to reload the OS if it needs to be done, and booting from SSD is very fast. Cost was about £450 iirc, and it’s just worked fine ever since without missing a beat.

Gaming isn’t close to being on my radar so I’ve no idea how it would cope with Fortnite etc, but it runs MS SQL Server and Visual Studio plus other tools without breaking sweat, and does everything I need a PC to do.

I declined the kind offer of an extended warranty, in case you wondered.

I don’t agree with you Mike. I have a single computer (laptop) at home with 256GB and i’ve been using it for 2.5 years now. There is currently 180GB in use and 70GB free, although i could easily get rid of another 60-80GB if necessary.

For all other storage or backup purposes an external harddisk would be a better option, preferrably a NAS, but it doesn’t have to be on the computer itself for any reason.

I’ve got an external My Passport HDD usb drive already.

Have a look (assuming you’re in the UK) at pcspecialist dot co dot uk
They will build a PC to your spec and deliver it, you just pick the specs from dropdown lists.

Early SSDs had limited read/write cycles so we learnt not to use them for general use. Not an issue now but even so their cost makes them less attractive for general use. Mine uses spare spinny HDDs that were available, one internally and a couple more in USB caddies as archive & backup discs. All music is on the NAS which is mapped to the PC to make it easily accessible from there.

Youth of today apparently keeps whatever they want to keep in the cloud. Massive local storage is less of a thing apparently.

Think you’ve possibly missed my point. It’s good practice to separate OS and documents and especially so on cheaper PCs. If the documents HD fries then you have an external back up. However, if they’re all on the OS drive then that goes as well. Most OEM stuff doesn’t provide a W10 backup so you’re into instant extra expense and complexity. Especially important if buying second hand to make life simple for yourself.

A 256GB is fine for a few years but that space will soon evaporate. On cheaper devices it will also impact on speed. I build regularly for other people and 100% of people have no clue how to spec for five years from now let alone a decade. Get the right processor and GPU and you’ll easily get a decade or more provide you balance the rest of it.

Jim, perhaps you feel ambitious enough to build one? I don’t think you should be put off thinking that you need an esoteric skillset. Assembling a PC is pretty straightforward nowadays once you’ve settled on your parts list. You can select every aspect of hardware and maximize dollar for dollar the cost of each component.

I suspect it induces a certain amount of anxiety in most people. You are correct though. Get the parts sorted and you can build it inside 20 minutes and have OS installing inside 30.