How big a music collection is too big?

A lighthearted bit of introspection here. I have about 700 albums and continue to buy more regularly. Although this spans 25 years of collecting, I’d say 500 of those were bought in the past 5 years. So it seems likely to grow a bit.

Now, even before kids, I had problems balancing the enjoyment of my existing music with new stuff. But then I know people who have 20,000 albums!

And I got to thinking. What’s the point? How do you even enjoy that? If we say an album is an average length of 45 minutes, then 20,000 albums would take 625 days to play end-to-end once each. Or 4 years if you’re retired and play music solid 12 hours a day with no repeats. No one does that. Do people at the 10k mark just not listen to the same album more than once? Or listen to albums like the rest of us and just own a lot of stuff they have never played (and never will)?

Personally, I play new albums many times. I can’t enjoy most music on the first few plays. I need to absorb it, digest, and then it starts to be an electric experience. And I come back to everything after a while a rediscover it again.

If I had 10k plus would this even be possible? Would having a collection be meaningful? Certainly before streaming existed, I had a friend with thousands in a dedicated room. He reckoned he could appreciate anything in one play and with so much music, life was too short for “repeats”. He wanted to own them because most were not radio material and he was obsessed with trivia in liner notes.

There was a similar thread on the old forum.

To me, also, there is no point to a huge collection, as the reality is most won’t get played more than maybe once or twice - but then, it is clear to me that people with such large collections do so because they are collectors, rather than to play the music: it appears not uncommon that they have multiple copies of albums just to have every version regardless of whether there is any musical difference (not thinking classical compositions played by different conductors/orchestras, where they can each be very different interpretations). Nothing wrong with that, but really they need considering in a different way from collections bought for the musical enjoyment of the collection.

In terms of a music collection for playing, I buy music because I know I want to listen to it - and the means multiple times. With my collection of about 1200 albums there are maybe 100 or so to which I listen often, several times a year, and some that get played quite infrequently. In the 1970s I probably added an averaged of about an album a week - initially at least very much constrained by disposable income, but even through the following two or three decades I would not have been able to justify the expense of more than an album a week had there been more I wanted. Thereafter purchasing slowed as I had plenty to play, and also found less new music to my taste. In recent years my purchasing has been down to an average of maybe a dozen or so albums a year, though far from regular, some years almost none, so my collection is still growing, but very slowly and I doubt will ever get much more than maybe 1500.

That’s a whole can of worms right there! I think the key word in the title is Collection.

To start with, we buy music because we like music. We get a better system to better enjoy that music, which in turn leads us to buy more music, because we are now enjoying it so much more. At some point, which is different for each of us, we start collecting music. For instance, I have 20 Neil Young albums, so I think I might as well get the rest of his discography. I am not after every variant of every album he made, but some collectors might.

I also enjoy finding connections in music, eg. the CSNY family of groups which includes solo efforts, and groups such as The Byrd’s, and Buffalo Springfield.

What I’m saying is the collection takes on a life of it’s own. Will I listen to everything I buy? Yes! At least once when I buy it. Some get played again, others get put on the shelf and are simply part of a collection.

At some point, the collection will become a library, a repository. As you said in your OP, there is no chance of playing every single track, as it would take years of dedicated non-stop playing.

I have about 1100 cd’s, and have only recently realised that I am collecting cd’s now. With cd’s being so cheap at the moment, I am happy to take a punt on music I have never heard of. For example, last week I bought a Zutons album. Never heard of them but really enjoyed the album. They seem to have made 3 studio albums, so without a doubt I will buy the other 2.

So back your OP, the point is: it’s a collection. It will be as big as it needs to be, and will probably grow continually.

(I got a bit rambly there, I hope it made sense).

I bought a Zutons album. Never heard of them but really enjoyed the album. They seem to have made 3 studio albums, so without a doubt I will buy the other 2.

Superb group and definitely worth completing the set.

If you like CSN&Y then may I suggest collecting music by the Hollies. The albums Evolution and Butterfly would be a good starting point and dare I say more than hold their own against other CSN&Y output. These albums were around the time of what I consider to be the Hollies best single “King Midus in Reverse”. Even after Nash left, the Hollies continued to make some great albums.

Some folk spend money on cars, expensive holidays, exotic Ethernet cables, alcohol, cigarettes and so on, I prefer to listen to and collect music. Second only to watching cricket really.

I have just sold off my entire vinyl collection from one band. 700ish records. As it turns out it was a great place to put my money over the years and I made a pretty penny. I maybe only owned 1 or 2 records that I had played in my youth. Essentially they were all for collecting purposes only. I have about 1000 CDs from the same band but these are played more, certainly not all of them and in time these will be sold as well. I will keep the best versions and live bootlegs that offer good historical set lists or high sound quality.

My listening music collection has a self imposed limit of 1 Ikea Billy bookcase with the shelves spaced at CD height. It fits about 1000 CDs in it. I don’t see the point in having anymore. I have started having a clear out and selling these on eBay. I use the money to buy new music that I will listen to. If I have not listened to the CD in a year then its in the possible chop pile! So far I have been far from ruthless but I can see me having a session soon and selling another 50-100. I get between £3-5 each so thats £300-500 to respend on music once sold. This also helps when looking for music to play as I have to sift through less ‘junk’ in tne process!

Thanks for info, will look into it.

I spend my money on mountain bikes, + associated equipment/travel/transport. There’s enough left for music though

However, if you’re still getting those prices, then kudos to you

There was a similar thread on the old forum.

No doubt. That’s a whole nother kettle of fish right there. The search function is useless and, I have discoved, some threads purged. I had one that a manufacturer objected to and lo and behold, a 8 page thread is zapped. I’ve all but given up on the old forum. Shame as the content was excellent but it’s been made useless.

I recall making a contribution to the thread on the old forum. I’m a record collector or more precisely an album collector. Bought my first album in 1974 (David Bowie - Aladdin Sane) and since buying my first CD player in 1987, I have built up a sizeable cd collection which compared with some people I know is not out of the ordinary. Lucky to have travelled the world with my job and first thing I did when I got to my hotel room was look in the yellow pages and note down all the record shops.

I nearly lost half of them when in 2002 after 20 years of marriage my wife decided she wanted something new and the collection was cited in the divorce assets.

Life goes on and I have now 13,483 albums (took two years to digitise) and I still enjoy the buzz of owning a new album or finding a new artist and tracking down their catalogue.

As the great philosopher John Miles said ‘Music is my first love and it will be my last, to live without my music…’ Which leads me on to the problem what the heck do I do with them when I go. My kids are not particularly interested in music so I was think of doing a KLF but the damage to the environment is a concern. 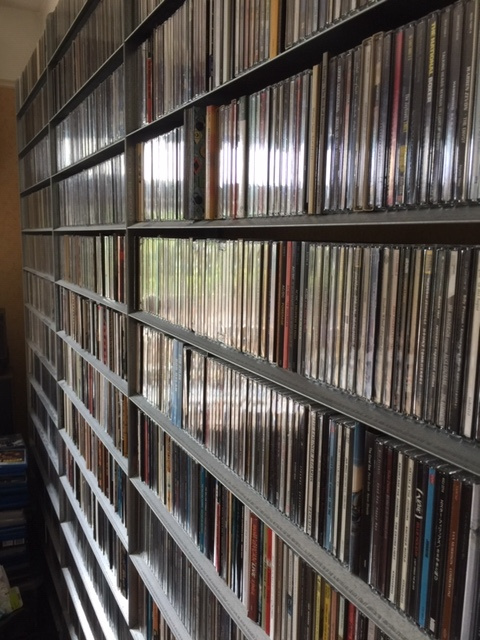 As music, I would say it’s too big when you regularly listen to less than 10% of it.

As a CD / Vinyl collection, then there’s no limit, but that’s about collecting the disks not about the music.

I have close to 2000 CD’s. Some of which I haven’t listened to in years but have no intention of disposing of them. I freely acknowledge that a large part of acquisition is the buzz of buying and the accompanying stimulation of endorphins. And now, with the price of CD’s so low (3 for a pound in charity shops) I’ve really nothing to lose if I acquire a dud. It’s an addiction, a comparatively mild and benign addiction, but an addiction nonetheless.

I know i’ve got music from 993 different artists, I reckon circa 7k CDs collected since 1987. All I’d digitised along with approx 1.5k of my fave artists bootleg shows.

I won’t sell any of my collection as I did that previously and have found myself wishing I could listen to a particular album (pre Tidal days, but still like a ‘local’ copy rather than streaming), this wishing to listen to something particular is heightened further when seeing what people are listening to on this forum.

Personally, I play new albums many times. I can’t enjoy most music on the first few plays. I need to absorb it, digest, and then it starts to be an electric experience. And I come back to everything after a while a rediscover it again.

This pretty much sums up the way I listen to new music. The great thing about a streaming subscription is that you can try before you buy for as long as you like, so you never waste money buying a dud. Not that I purchase less music now, as a subscription enables you to discover good new music so easily.

I have a personal test:

If I buy something which I then discover I’ve already got I know I’ve lost the plot, which has been the case on 3/4 times these past 2 years or so - and I don’t mean being a completist on endless re-issues/remastered versions.