I sold my Rega Planar 3 about 3 years ago to fund hifi upgrade.

Since then I have really missed one LP in particular - Spillane by John Zorn.

I just found that it’s available to buy on Qobuz.

I eventually managed to download it into my aging home pc, and then download and install 7zip, and use 7zip to unzip the .TAR files.

Then move these 4 track files onto a couple of spare pen drives.

Stick a pen drive into the usb slot on the front of the ND5XS2 and voila!

John Zorn and Albert Collins jamming away in NYC, the greatest jazzzy blues you never heard. 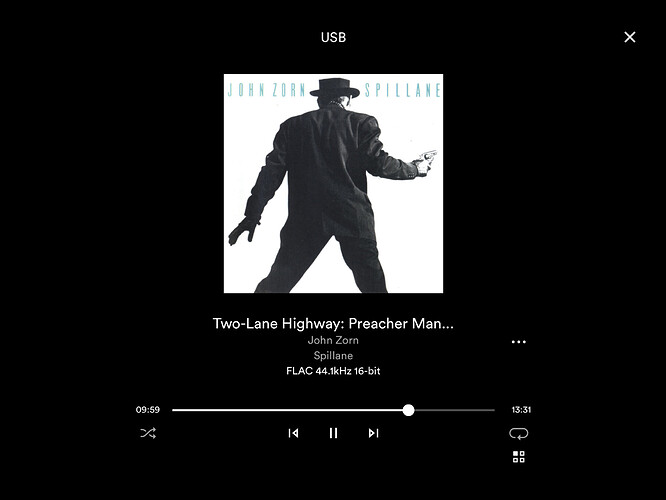 You might want to avail yourself of my software for managing qobuz tar files. It takes care of the “untarring” and puts the files into artist/album folders.

Sorry to hijack the topic, but for people who use qobuz to download albums do you always go for 24 bit albums. On the few albums I have downloaded it seems that 24 bit is always available, but does it make a difference. My strategy usually is if it is a new album with suspected good sq I go for 24 bit, but on quboz it seems that there is absolute nno information about the doriginal music master/data.
Claus

Good question.
Frankly - I have no idea.
The Zorn album I downloaded is low res - which I guess is because that’s how it was originally recorded.

A friend from the previous version of the forum (JN) told me that a friend of his came over to listen to an SACD player.
JN’s friend put on an SACD he had brought with him of Dark Side of the Moon.
Both of them agreed it sounded awful.
They put on JN’s ancient CD of it and it sounded great.

So, yes, it’s almost impossible to vet the quality of streams and downloads on Qobuz.

(And that’s arguably even worse on Tidal because of MQA.)

But it is much better in the vinyl and CD world?

In the example above, it seems likely that the SACD was billed as a superb mastering of this classic album (or similar).

But unless you buy it and compare it to other versions of the recording/mastering how can you tell?

How much time and research is reasonable to put into researching each piece of music?

That’s why I’ve given up trying to create a library of music.

I just stream from Qobuz.

Even when Qobuz has numerous versions of a classic album - e.g. Bill Evans or Paul Bley - I sometimes spend half an hour comparing them.

Sometimes there are clear differences and then I make that one my ‘Favourite’.

But even that is questionable as it’s often hard to find later, and the versions in Qobuz change, and the act of forensically comparing versions of tracks ruins the enjoyment of the music itself.

So, yes, it’s almost impossible to vet the quality of streams and downloads on Qobuz.

Surely you can listen as you suggest to the album stream first to judge the SQ as there are often several 16bit and 24bit versions to choose from before downloading.
Not sure how it can be easier on vinyl or CD.

It is not really a Qobuz issue as they get the tracks the record companies send them.

You are right however that “provenance” is an important issue and record companies are not usually forthcoming about it. It is particularly relevant when older releases are appearing and there are multiple versions out there, and you want to get the best.

I often make albums Favourite and can select from the Qobuz Favourites when I want to play it. Is that function not available on the Naim app?

Yes but not all purchases are available to stream on Qobuz some are purchase only so this doesn’t help.

Yes, I can save a track as favourite on the Naim app.

Perhaps I could reorder them by first letter or name search?