It’s got to go - it provides bass and scale, but really it’s not as good as things can become without it. It just isn’t. Too slow & soft. What do you reckon? I Love the n-SATs as they are though…i’m just not interested in any of the latest offerings. How can i move on?

For me, and much of the music I like, missing the bottom octave or two (at equitable output level) seriously reduces enjoyment factor compared to having it, so small speakers would need a sub (whether the sub then achieves what’s needed of course depends on other factors).

Slow an soft sounds like it’s not setup properly?

The thing is the n-SATs produce enough bass as they are, the SUB just gives it that overwhelming car bass quality that drives past one’s flat most evenings…

Are there any modern day n-SATs that can give more?

I regret buying the bloody thing.

It’s a huge bulk that no one really wants. Will cost a lot to post and sell on. I should of stuck to my guns when i bought n-SATs.

I don’t believe N-Sats go low in the bass (or at least, if they do it will be significantly diminished relative to output capability in the upper bass upwards). Even Naim’s own specs only claim down to 50Hz, though with no indication of whether that is the -3dB or -6dB point or other. And if the sub gives the “car bass” quality you describe it is either a) not set up right or b) not a good sub.

Definitely doesn’t sound like you’ve got it optimised. Have you tried experimenting with it’s position in the room?

No i haven’t. It’s a heavy bulk and that after a heavy day’s work the last thing i want to do is lug it around, especially when it sounds so good with the blooming thing turned off.

Setting up a sub is every bit as critical as any speaker - the frequencies may be omnidirectional, but the way they interact with the room is the same as any other speaker with bass output, and there’s the added complexity of integrating with the n-Sats. The solution is really simple: if you don’t appreciate it, and can’t be bothered to try setting it up properly, then sell it! You’ll probably not lose on it, and you’ll make someone else happy!!

I can sympathise here. Much as I love the n-Sub, (and it is very very good, especially with music) I invariably end up switching it off or disconnecting it, as I end up preferring the SL2s without.

Yes i prefer the music without n-SUB as well. I can’t put my finger on things here, but my n-SATs really are providing most of the enjoyment, so much so, as to relegate the n-SUB as almost superfluous in the grand scheme of things. I can’t help feeling that it’s an add on that simply isn’t required. Plus it chews extra power from my electric meter.

I completely understand your issues. I’ve never got along with a sub. I know some will say that it wasn’t set up right etc etc but I have a big room and when I’d get up and walk round, the bass would change and become disconnected from the speakers. It sounds like you might have a room mode that is accentuating your lower end, hence the n-sats sounding bass heavy, and the sub sounding lousy. If you enjoy the n-sats so much just leave as is. If there’s one thing I’ve learnt in my recent hifi journey it’s that when you have that magical synergy… leave well alone and enjoy!

I had nSub and nSats in my ‘office’ system and was amazed how subtle the sub was yet how much it contributed. I guess I had it turned down low. Essential? Maybe not but I would have missed it.

Never felt like adding it to my SL2s though.

Is it superfluous (to you) or not?

Let’s not forget that it’s primary purpose was being part of an av system.

the SUB just gives it that overwhelming car bass quality …

Could that explain your lousy contributions to the House music thread ?

I’ve owned nSats in the past, after owning IBL’s for 17 years. IMO they don’t possess the absolute stregths of the IBL’s, but, and it’s a very big but, they clearly have the same DNA and crucially they sound, to my ears, much nicer with digital sources than the IBL’s ever did. No surprise here - the IBL’s were voiced for analogue sources and specifically the Linn LP12. The IBL’s were, IMO one of the most capable speakers Naim or anyone else for that matter ever produced. Clearly superior to SBL’s IMO - faster and more musical.

What I’m saying in a convoluted way is that nSats are superb. If you like them then is there any need for you to ‘move on’? They, like the older classic Naim speakers, were of their time - from a bygone era. You are not likely to find anything quite like them nowadays, any more than you are likely to find steam locomotives hauling routine passenger services.

As for subs I’ve never ever got on with them. They belong in a home cinema system. Totally inappropriate for a music system. Ditch the nSub and hold on to your lovely nSats.

The IBL’s were, IMO one of the most capable speakers Naim or anyone else for that matter ever produced.

Apart, that is, from the fact that they simply don’t do bass (meaning not at the same relative sound level as the rest of the spectrum). That to me makes them useless. Back at the end of the 1980s a then new friend of mine proudly played his system, with LP12 source … and IBLs. I tried to be polite, but struggled as for me the emotion in the music was missing. A little later he heard my system. Then when I upgraded my IMF TLS50ii speakers to their big brother, the RSPM, he gladly took my old speakers and started enjoying music more. 25 years later he upgraded to my old RSPMs which he enjoys to this day).

I’m no authority on subs and am indeed a newbie to mine (a lowly little CA Minx), and I’ve never had the pleasure of your speakers or an N Sub but from your description, I think your setup could be (eek) sub-optimal. Myself, I’m still experimenting with placement.
I change sub settings dependent on music played - most modern records don’t need it too much, some not all - they’re mastered bass- heavy enough to my ears, but I have some older records that are pretty bass-light, and for me this where the sub is quite delightful in filling out the lower registers and putting meat on them bones, as it were. Love what the sub brings out with kettle drums, for example, and it seems to add an extra something to soundstage depth.

) so I think experimenting is key. Personally, I wouldn’t move it on yet.

Good luck. I’m sure the N Sub will sell like a hot cake if you decide you really can’t live with it (I wish I had the space for it!) 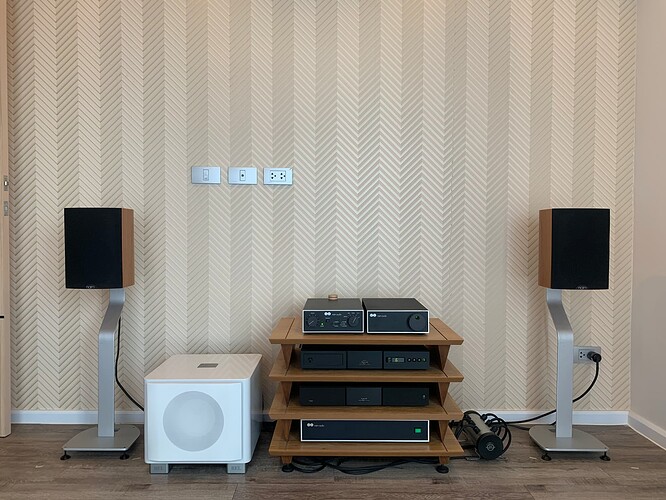 I’ve just borrowed a REL T/7x to try with n-Sats, it add a bit of oomps and extension. I would say I prefer the sound with the REL but not its look in my system. I think I can live without one. Only n-Sats sound satisfactory to me.

Are there any modern day n-SATs that can give more?

Hi Stephen, back when I had my Proac Tab 10 Sig I was constantly asking myself what a sub might contribute to the already phenomenal small monitors. Despite that the room these were in was relatively small, around 13m2, the Tab simply was missing a couple of octaves in the lower end. I was desperately trying to convince myself that I am not a bass head and I really am not, I do not need some crazy earthquake levels, I just need at least the most common standmount speaker frequency response. I was aware that setting up a sub can be really difficult and also getting a good one, I was looking at a small KEF sub at the time, is not cheap.

Finally I ruled out the purchasing of a sub, but I simply could not live with missing bottom end of the Tabs, everything else they do, they do it superbly. I think the main issue is the physical feeling of the music, it is being mentioned every now and then in small monitor reviews, like I was hearing the sound, a mighty good sound, but I was not feeling it, it could have been the so called emotion or engagement that was missing due to a certain low frequency range cut.

Since I swapped them for the D2R’s things for me just clicked, they have the same characteristics, but they also have the part that the smaller monitor was missing, by design. This can easily be my end game speaker.